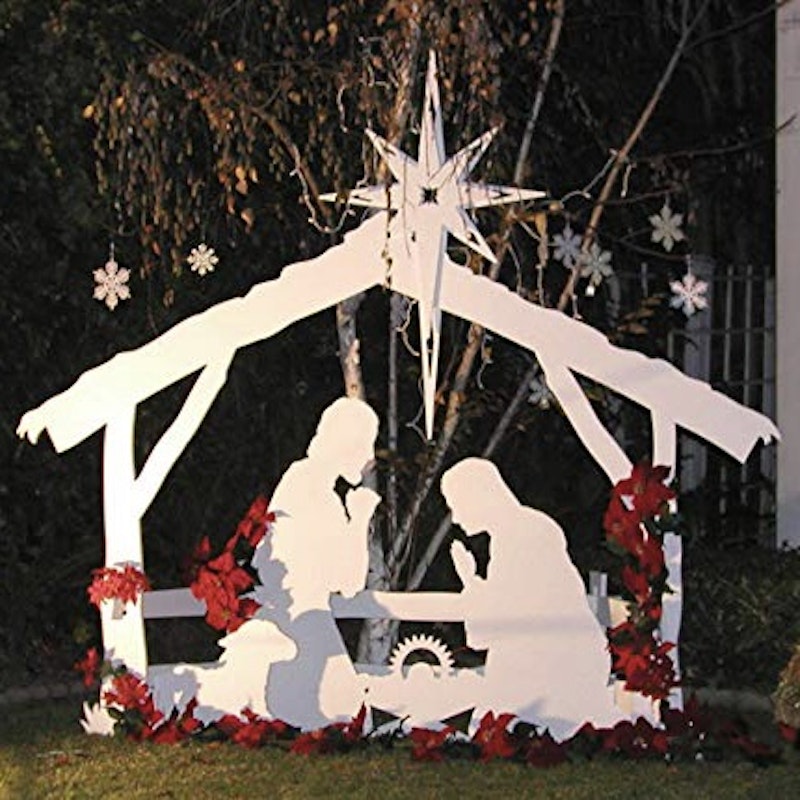 It’s to my discredit as an orthodox Christian, someone who should have spiritual matters on his mind, but I’ve always had a deep affection for the popular American traditions surrounding Christmas. The lights, the decorations—these are the reassuring suburban verities that I grew up with in Cleveland.

Yet recently—in maybe the last three or five years or so—Christmas has started to look ugly to me. I know exactly why, too: there’s been a real change in the nature of Christmas decorations. These days there’s a lot more garbage to complement, or even obscure, the Christmas decorations that I’ve always enjoyed, which are the accustomed old ones, expressive of the old theme of renewal: the wreaths, the evergreen boughs and garlands, the holiday lights, and so on. (Either white or colored lights are fine with Harris, who is non-denominational on this matter.)

Rubbish these days, everywhere: styrofoam multi-colored iCandyland sets, cardboard imitation fireplace-and-chimney extravaganzas, blow-up Frosties, red-white-and-green steroidal plastic mushrooms, animatronic elves, LED light displays that throw laser-like green-and-red patterns across sidewalks, low-rent plastic tree baubles that lack that magical shine of glass bulbs, not to mention fail to emit glass bulbs’ enchanted tinkle. (Needless to say, none of this junk alludes in even the most roundabout way to the Birth of Our Lord and Savior Jesus Christ. But that, as the kids say, is a ship that long ago sailed.)

Halloween has undergone a similar aesthetic deformation. (I have, as well, an impious affection for Halloween, that marker of autumn in America, no less than are the World Series, football, election days that never seem to dislodge the monsters who rule us, and Thanksgiving.) The Halloween pageantry that I’ve always liked is the old imagery evocative of the harvest. This imagery is largely of Anglo-Saxon derivation: the gourds, the dried corn, even what might be, for orthodox Christian tastes, the disconcertingly too-pagan jack o’lanterns. In the last several years these traditional adornments have been supplemented by a range of vulgar “horror” trash: plastic skeletons and tombstones, cheap hanging wraiths and severed heads from Party City, sound-effects-and-light sets that emit ugly groans and harsh LED effects, and on and on.

In other words, the Christmas and Halloween economies have lately suffered extreme and concentrated versions of the fate that the American economy in general has suffered over the last several decades. That fate: a deluge of the cheapest and shoddiest merchandise, mass-produced “offshore” by the Chinese and Bangladeshi slaves of the globalized economy. It’s as if our masters, those who administer and profit from our distorted and unjust order, have, over these past several years—years during which they’ve felt the foundations of their self-serving order shake—started “flooding the zone” with even more ticky-tacky and tinselly trash. The goal is to provide a more intensely distractive holiday thrill for their immiserated and muttering post-Christian subjects.

Both the new Christmas and the new Halloween decorations represent the big-boxification of our holidays, of our lives, or our consciousnesses. They represent opportunities for an even greater inundation of our lives with garbage from the sweatshops of the developing world—the availability of which trash in mass quantities represents arguably the main “benefit” of our economy as it’s been contrived by our soon-to-expire “elite.” Yes, the ugly new Christmas and the ugly new Halloween are metaphors for the destroyed post-Cold War American economy. That’s my idea, anyway, and I’ll stick to it.

But not all is bad news. The Advent season proceeds towards its triumphant terminus: the incarnation of our Lord. Meanwhile, conservatives of a “Harrisian” disposition, like Sohrab Ahmari and Adrian Vermeule, are starting to mobilize behind a very “Harrisian” idea: banning pornography. More on this exciting project soon.