The onetime tourist mecca has passed into history. 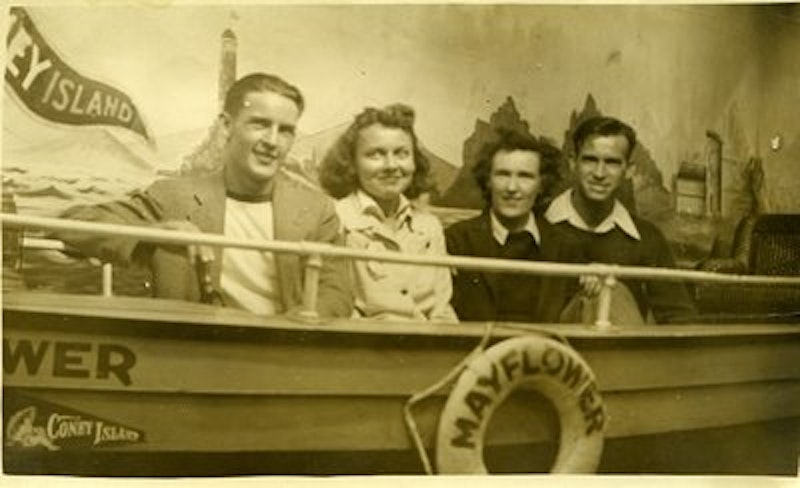 It’s been a dozen years since I’ve visited Coney Island—nearly a century ago the 10th Wonder of the World—and the desire to return is just about nil. The Brooklyn “resort” fell into decay during the 1950s, although its fade into obscurity, and nostalgia, really accelerated in the 70s. Take a look at the photo above, snapped in 1939, and you can see from the faces of my parents (on the right) and Uncle Joe and Aunt Winnie—out on a double date—not only the exuberance of young adults not yet 25 with their lives ahead of them, but the frivolity of what must’ve been quite an attraction. An escape from the steamy city—no air-conditioning yet, at least not for the middle and lower classes—on a weekend, probably a dip in the ocean, some taffy, ice cream and beer, undoubtedly several unimaginably exciting rides, in all an inexpensive afternoon, just the cost of a subway token and the cheap fare at Coney.

Growing up on Long Island, my family, or so I’m told by my brother Gary, made several outings to Coney Island in the late-1950s and early-60s. It’s a little disquieting that I remember none of this—unlike trips to Jones Beach, Yankee Stadium and the Polo Grounds (where the Mets played their first two years)—and maybe I got terrified once on a merry-go-round and blocked it out. Scratch that: I don’t go for the repressed memories malarkey, so my guess is that the trips stopped when I was four or five.

My recollections from 1960 are scattered: kindergarten at Southdown Elementary School and enforced naps on the floor, which pissed me off; showboating for my brothers’ friends like a funky monkey (which I loved), reciting all the U.S. presidents in order; the Good Humor man driving up LaRue Dr.; getting stung by a wasp that came down the chimney; my brother Doug working for the JFK campaign, which caused some head-scratching at home since our parents were Nixon supporters; and seeing John Coltrane at the Village Vanguard with my pal Knuckles. Okay, I’m fibbing on Trane, but not the rest. Later on, after my parents had died, Uncle Joe would, on occasion, after a highball and some prompting, fill me in on the old days: trips to Yankee Stadium in the 1920s, which wasn’t far from their South Bronx Irish ghetto home, and Coney as well. One time, at a large party at some swanky Manhattan restaurant in the 90s, Uncle Joe, now around 80, was asked by an impertinent young woman—seated at our table—about his sex life growing up, and as he blushed and stammered, I quickly veered the conversation to a neutral topic and later chewed out the hussy for embarrassing an elderly man from a different era, who just happened to be an uncle I was extremely fond of.

Gary, five years older than me, gave his observations on Coney: “The seediness of the place made a big impression on me. I had my first Nedick’s hot dog and orange drink from a stand just outside the park’s entrance. There was the Cyclone, a giant and rickety-looking roller coaster, and the Parachute Jump, a ride that consisted of a small wooden seat attached by ropes to a closed parachute. You had to be 21 to get on this thing. The rider would be strapped into the chair and then hoisted into the air by a winched cable. Dangling from what seemed like a great height, at least to me, the rider would suddenly plummet the moment the cable was released. Halfway down, the chute would open and slow the rider’s descent. I remember Mom once said that someone had died by falling out of the chair just as the chute opened.”

The last time I went to Coney, where my son Booker for a few years liked to celebrate his August birthday, I feared for my own life. Booker and I were on a semi-scary ride—my wife Melissa and older son Nicky were off at a booth tossing softballs for stuffed animals—and all was swell as we went round and round, a little fast for my taste, but Booker loved it. Until the strung-out operator, joking with confederates, decided to put the apparatus in reverse and it all started over again. Mind you, this ride, like a lot of Coney, was decrepit, not unlike an amusement park in Asia, where regulations are lax. My eight-year-old son was a bit shaken when the ordeal was over—although today, he sloughs it off—and we held hands while trying to find Melissa and Nicky. In truth, the pier at Venice Beach in California, which has also seen better days (in fact, on one visit there, I saw a fellow about my age that I was certain was a high-school classmate, a very good guy whose life went south into homelessness), seemed like an antiseptic Disney World compared to Coney. The haunted house was pedestrian and games of chance run-of-the-mill, but it was still fun to grab a dog from Nathan’s and walk along the boardwalk. But enough was enough.

Kevin Walsh, who runs the website Forgotten New York, tells me that Coney’s been “sanitized” in the past couple of years, with a “new” Luna Park, “although most vestiges of the old days torn down.” In fact, he’s giving a tour of Coney this Sunday, April 12, if you’re in the vicinity.

My longtime friend Michael Gentile and I went to the annual Mermaid Parade in ’88 and ’89, and as I recall, took some pictures for my column “MUGGER” in the fledgling New York Press. Carping aside, I’ll always have a soft spot for Coney, since long ago it was the site, one bitter January afternoon, of my first date with Melissa. We took the train from her Brooklyn apartment—a long wait, but we smoked cigarettes in the station, only a technical infraction then, as opposed to a capital punishment crime today—and nothing much was open, except for Nathan’s and one or two spots where we grabbed a beer. The best part was simply walking on the sand, looking at the Atlantic Ocean waves, and having the beach to ourselves. That memory trumps the near-tumble (or worse) Booker and I experienced years later.