Taking in the precursor to spring’s ecstatic rebirth. 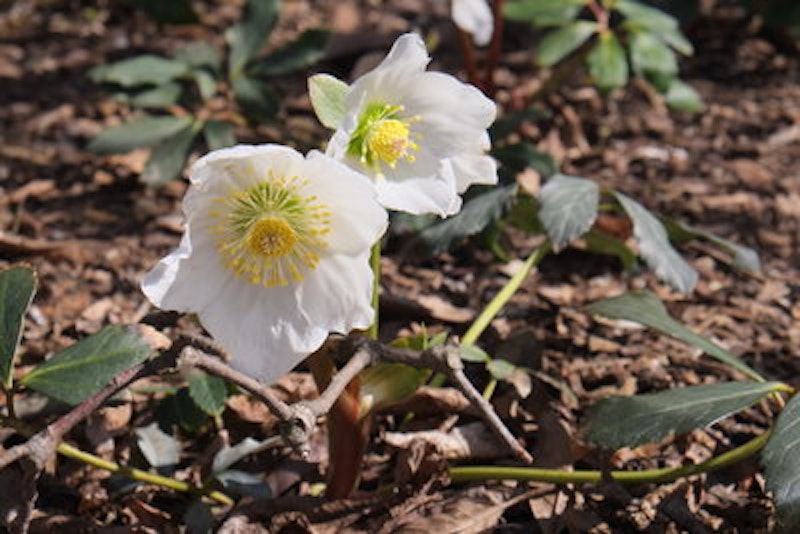 On Saturday, April 4th, my friend Cocoa and I got up early, as planned, to visit the Brooklyn Botanic Garden during the 10 a.m. to noon slot, which is free to the public. We consumed a quick breakfast of leftover pumpkin risotto and drove to the garden. The 50-degree weather and very early spring sun enhanced my happiness and sense of adventure.

We entered through the gate, bypassed the inactive ticket saleswoman, whereupon a potted monkey-puzzle tree greeted us and commanded our attention. I got out my notepad to write down the name and asked Cocoa how he would describe such a tree.

The lane we were on branched out to a variety of curated attractions. It was tough to pick a path. Not knowing the garden’s dimensions, I had the fear of missing out. Cocoa decided on the Japanese Hill-and-Pond Garden. Its sloping rock, pine and shrub terrain reminded me of hillside gardens I visited in Seattle. Wisteria and Japanese flowering cherries teased our lust for spring with little acorn-shaped, puffy buds. The serene, green and scummy water, refreshed by a waterfall, afforded bliss to a score of turtles. They had a choice of sunbathing on rocks or getting their laps in, swimming beside big fish.

The wedding party for a young couple dominated the viewing pavilion, with all manner of formally dressed friends and family spilling out of both ends of the caboose-like cabin. They were engaged in photo shoots, and the bride and groom twirled about the pier, kissing for every camera. Our cynical minds deemed them obnoxious. We avoided the party and the random parents and children coming down rocks to wax poetic about the turtles. I was triggered by the size of one jiggling fish. The torii was too touristy.

We made our escape into the Shakespeare Garden, which is curated to commemorate all the herbs, flowers and plants mentioned in the poet’s plays and sonnets. Nothing much poked above the stages of tiny leaves, grasses and buds. However, I recognized my spirit-vegetable in the wilted and worm-holed cabbage: yellow, green and white, a member of the mustard family. That cabbage sat up, diseased, defeated, but persistent like a bitter old bum in a ward full of babies.

An unavoidable joy of touring the Brooklyn Botanic Garden is that of ignoring the impossible-to-pronounce scientific names and instead basking in the humor and invention of their colloquial equivalents, bold on black placards. The unscientific names intrigue with the assumption of myth, superstition, poetry and culture. I called Cocoa over to the Christmas rose, only seconds later to be parroted by a passing elderly couple, likewise amused by the holiday name for the blooms popping among sprouts and buds. It was then that we encountered the placard for sneezeweed. Cocoa convulsed with laughter and snapped a photo.

We were not the only flower fanatics gravitating to the Steinhardt Conservatory. That museum-grade greenhouse provided an indoor core to the campus, and it was packed. My nose registered a post-flood basement mustiness. Regulated sunlight penetrated the facility to pamper celebrity-status flora. In most rooms, the place was rife with headache-inducing humidity. The Steinhardt housed a rainforest, temperate zone, aquatic house, arid room and bonsai gallery. Several times I caught little kids with sketchpads out, drawing flowers and fruit trees.

When they weren’t reminding me of silly gifts in a Hallmark store, the bonsai impressed me with their appeal as living micro-sculptures, personalities, or model sets for The Lord of the Rings or Avatar.

The Desert Pavilion proved a favorite for both of us. Its sun- and drought-defying succulents, products of Mexico, Arizona, Peru, and South Africa, transported Cocoa and me back to our Texas days when we hiked and camped in Austin, Marfa and Big Bend. To my mind, there’s nothing more beautiful than the watery flowers that issue from cacti, agave and prickly pears. We’d have to come back for them. “Ah! The air in here took away my headache,” Cocoa exhaled in relief. My mind was blown by the living stones of Africa. They looked like mini, toady brains. I grossed myself out at the thought of stepping on one.

Who doesn’t like seeing their favorite spices and food products dangling from the primal branches of trees? We saw coffee berries, cola, green little pepper beads, and pendulous jackfruits—still babies, unlike the 20-pound one I weighed at Whole Foods, unable to fathom how anyone could afford one. Cocoa got the teddy, Black Bear, out of my backpack to include him in a jackfruit selfie, and then we let Black Bear sniff some witch hazel.

We cut our path by Cherry Lane, a lawn of evenly spaced trees that wouldn’t be out of place in a production of Alice in Wonderland—not a blossom in sight, another reason to come back in a week or so. When we came to a plot of land dedicated to the espalier tradition, it unsettled me. Near leafless, lifeless apple trees were “trained” to grow along wire and wooden fences. It reminded me of crucified prisoners. Next we made it to the Native Flora Garden, which bored the hell out of me. We had enjoyed far better impressions of New York’s native growths at Bronx Park and Marine Park.

Cocoa and I moved on. Up ahead, a crowd of visitors stopped before a lush lawn of purple, white-ribbed crocuses low in the grass. A man and woman were in the thick of the patch snapping their lovebird photos when a golf cart with five security guards rolled up to monitor the situation. I urged Cocoa to sit Black Bear in the flowers and get his portrait. Cocoa waited for the right moment when the guards’ heads were turned and rushed in to capture the cuteness. We found ourselves in front of an enormous weeping beech, throwing Black Bear 15 times into the air, trying our best to get an in-focus photo of him jumping for joy, winging recklessly through the air like a monkey, hooking branches, flipping and flying for the fun of it. We dropped him a dozen times and got him dirty. Then we zipped him back into the backpack but with his head poking out so he could see.

That was pretty much it. We grew tired and had seen enough during this bud season, the precursor to spring’s ecstatic rebirth. My takeaway was a sense of the poetry in furry buds, pre-births, small shoots, rising grass and leaf twinklings that disturb the barren rut hardened over the length of a too-long winter. I looked at the notepad I’d filled with clever and strange names: pepper face; paper bush; rock cotoneaster; and squill. If plant lives were like novels, I felt that I didn’t know even a quarter of a chapter of any of their stories. To carry away their full importance we would need to come back again and again, adopt them as our new special friends.