I’ll Take the Manhattan (Bridge, That Is)

No one wrote songs about the Manhattan Bridge. 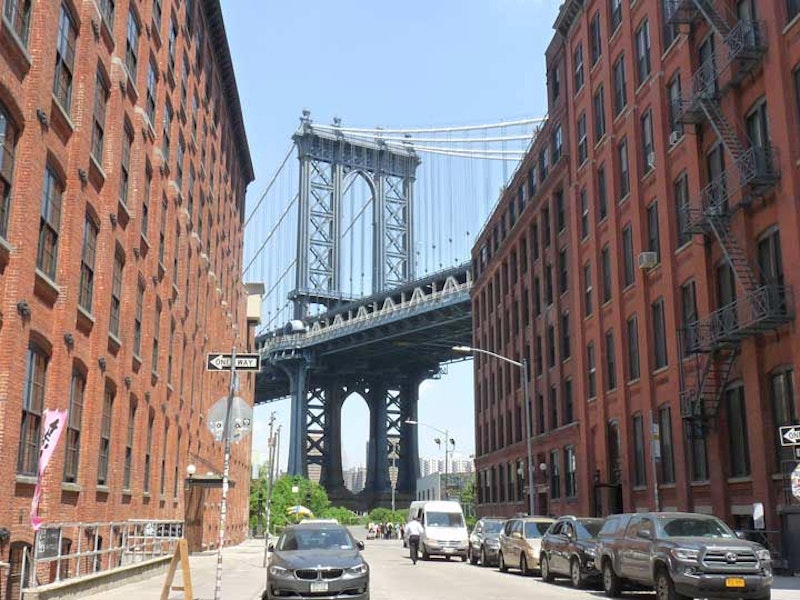 The Brooklyn Bridge is impassable for anyone who wants to relax, stroll on its central boardwalk, and gawk at the views of the bridge itself, the river and Manhattan beyond. Kamikaze bicyclists have taken over the walkway, and woe the pedestrian who strays over the painted white line in the center of the boardwalk that’s supposed to divide walkers and bicyclists. The Manhattan Bridge is a better bet if you wish to walk unimpeded, though bicyclists have found that bridge, as well.

Hart Crane never wrote poems about it, Sonny Rollins practiced sax on the Williamsburg, not the Manhattan, and Steve Brodie never jumped off it. The Manhattan Bridge has always stood in the shadow of the Brooklyn Bridge. But make no mistake: The Manhattan Bridge is a fascinating piece of New York City’s urban infrastructure.

The Manhattan Bridge was the fourth bridge built across the East River between Manhattan and Long Island. It was finished in December 1909, some nine months after the Queensboro opened, and was started by the partnership of New York City Department of Bridges commissioner Gustav Lindenthal and bridge engineer R.S. Buck. Lindenthal and Buck were deposed as the bridge’s architects in 1904 over a dispute about construction techniques, as well as the usual politicking that goes on with massive projects. Their replacement was new chief engineer Leon Moisieff, who completed the project.

Construction began in 1901 and ended eight years later, as suspension bridge construction had become more standardized and much faster than it had been in the 19th century. (It took 13 years to build the Brooklyn Bridge.) The Manhattan Bridge got its name in 1902, not without objection from The New York Times, which suggested the name “Wallabout Bridge” because of its proximity to Brooklyn’s Wallabout Bay. The city, however, stuck with its proposed name for the 6855-foot-long bridge.

The bridge featured subway service almost from the beginning, with trains starting to run in 1915. The twin roadways above the subway tracks were added in 1922 as trolley rights-of-way, giving way to automobiles in 1929. 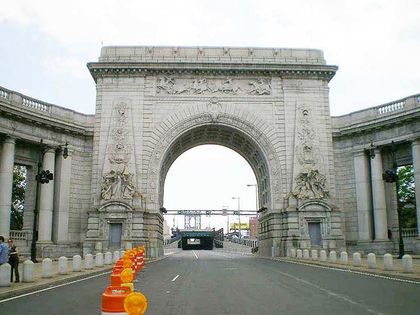 On the Manhattan end, the Manhattan has a triumphal arch and colonnade, unlike the Brooklyn, Williamsburg, Queensboro, and RFK/Triboro Bridges. The grand Manhattan Bridge plaza, which fronts the Bowery at Canal St., was completed in 1916 and is the design of John M. Carrere and Thomas Hastings, who also built the New York Public Library at 5th Ave. and W. 42nd St. They looked to two classic European monuments for inspiration: The Porte St.-Denis in Paris (for the arch) and the Giovanni Bernini Colonnade at St. Peter’s Church in Vatican City.

The Manhattan Bridge arch depicts two allegorical characters on either side of the roadway: the Spirit of Commerce on the north side, and the Spirit of Industry on the south side. Both are the work of sculptor Carl Augustus Heber. 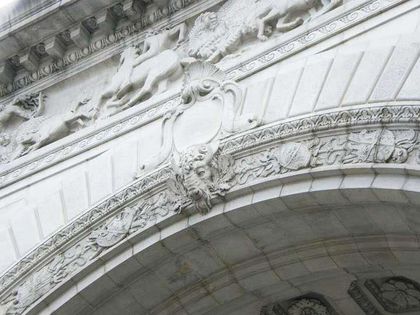 At the top of the arch is a frieze depicting Indians hunting buffalo by sculptor Charles Cary Rumsey, with a buffalo head at the keystone of the arch. In some ways, the bridge’s sculptors present mixed metaphors. While Rumsey celebrated the Old West (odd, since the bridge points east from Manhattan), the Carrere and Hastings design doesn’t allow us to forget the river that the bridge crosses.

For many years the Manhattan Bridge arch was poorly cared for and accumulated a patina of exhaust fumes and general soot. When the bridge was first built, the auto was still in its infancy, and trolleys and horse carts still traversed it. Today’s motorists can’t safely admire its plaza details, and the plaza is difficult for pedestrians to get at. Thankfully, the city power-washed the arch and colonnade a few years ago, and rebuilt the plaza. It’ll never be a place for quiet reflection, but it’s again the plaza the Manhattan Bridge, which celebrated its centennial in 2009, deserves. 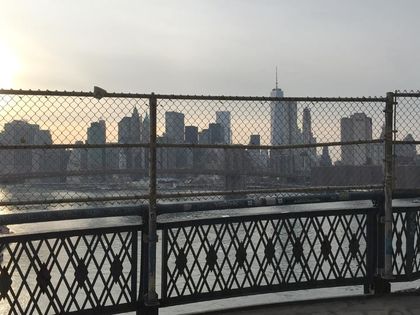 When the Manhattan Bridge walkways were reopened in mid-2001 (south side) and 2004 (north side), some aficionados questioned the inclusion of tall chain link fences in front of the rail proper, as they can interfere with the view. Photos from the 1930s by Berenice Abbott show that they weren’t there during the walkways’ first incarnation. But safety concerns won the argument.

The twin roadways on either side of the bridge atop the subway lines were originally used by trolley lines. Trolley service over the bridge ceased in 1929, and the lanes were then taken over by cars. Subway service on the Manhattan Bridge began in 1915. Originally the Sea Beach Line (today’s N) traversed the bridge on the north set of tracks, with the south side connecting the BMT 4th Ave. line (today’s R train) with the Chambers St. station on the Nassau St. line, which serves today’s J and M trains. In 1967, the track connections over the bridge at both ends were drastically rearranged and altered, with the Nassau St. Line severed and the 6th Ave. Line, today’s B and D trains, added. 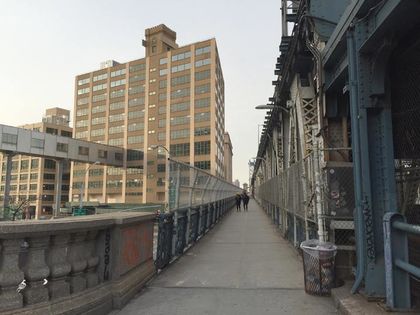 The Manhattan Bridge has required major upgrades and repairs over the decades, first in 1940 and then again for a decade beginning in 1990, when subways were rerouted through tunnels. Also restored were the walkways on the north and south sides of the bridge, which had been removed in the mid-1960s. Today, pedestrians use the south walkway, while bicyclists are supposed to use the north, but some stray onto the south walkway. A walk across the Manhattan Bridge is not as breathtaking as the walk across the Brooklyn, but the same skyline is there, and Manhattan Bridge strollers have the advantage of being able to view the Brooklyn Bridge.