As satire, it’s tame, both obvious and banal. 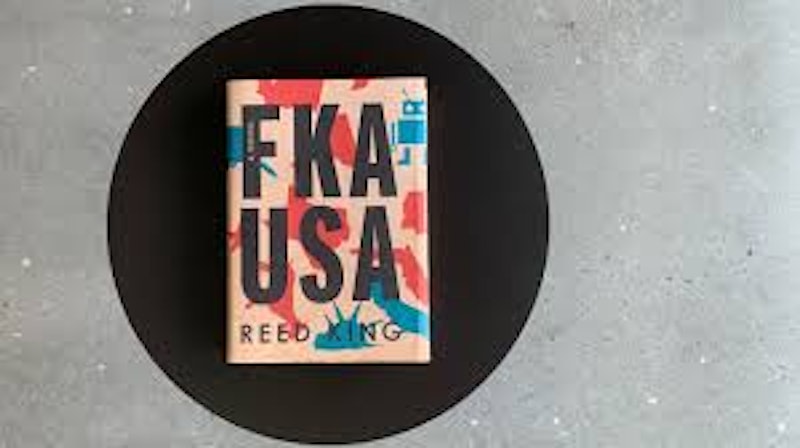 About a year ago, Warner Brothers bought the rights to the then-forthcoming novel FKA USA for a seven-figure sum. Written under the pseudonym Reed King by a New York Times bestselling author and TV writer whose true identity has yet to be revealed, the book’s since come out to a muted response. Is the book any good? And: why would a bestselling writer publish a novel under an assumed name?

The book’s a post-apocalypse quest story. A few decades from now, massive environmental degradation and an android uprising have led to the break-up of the United States, and a 16-year-old’s given a mission to convey a talking goat to the west coast in order to save the world. The hero, Truckee Wallace, sets off, picking up allies and companions along the way.

This sounds, and is, straightforward. Nominally the book gains its identity from a satirical vision of the future. A junk-food company rules a land where workers are kept uneducated and placated by video games. Energy comes from methane expelled by rotting human carcasses. Androids agitate for legal recognition as people.

As satire, it’s tame, both obvious and banal. Evil corporations are generic, and any residual satirical heft to the specific corporation at the heart of the book is eliminated when it turns out that the corporate head’s villainous master-plan has little to do with the profit motive. Despite vague intimations the book’s trying to Say Something about the United States. Canada and Mexico are barely mentioned, never mind China or Japan. Sentient robots as a stand-in for racial politics has been done to death for decades, and has never made much sense—robots don’t fit well as signifiers for human minority groups. They especially don’t fit well when racism is otherwise absent from the story.

There isn’t much of a coherent sense of society. That is, there’s no strong sense of what aspects of contemporary life should be ridiculed. No obvious targeting of any specific abuse or trend. Truckee goes about his business through a bland if bleak world, accompanied by a talking goat and an ostensibly lobotomized man hiding secrets, and it’s difficult to care. He doesn’t even cross the entire United States, just the southwestern part; the scale’s underwhelming, the setting underexplored.

The prose is sporadically interesting, with some nice action sequences, and a few good descriptions of the areas Truckee does pass through. Some sequences in big cities or the online world reach a kind of sub-cyberpunk density of imagery. But the plot’s bland, as Truckee stumbles by blind luck from one scrape to another. His voice is coherent, but not interesting; one wonders by the end why we got this story through this particular character.

There are references to better books. Images from The Wizard of Oz recur. Infodumps are presented in extended footnotes a little like Infinite Jest. But you don’t have to be an admirer of Infinite Jest to appreciate that the footnotes there had a structural purpose, presenting contrasting plots, while the footnotes here just interrupt the action at weird times.

Most obvious, Truckee finds a copy of a book called The Grifter’s Guide to the Territories FKA USA; we get some excerpts as he reads it in the story, while others are used as chapter headers. It’s a lot like The Hitchhiker’s Guide to the Galaxy, except The Hitchhiker’s Guide was a remarkable book while The Grifter’s Guide is tedious. It also makes no sense as a text; it’s a guide to the future United States as written by one particular traveler at one particular time, which means the things it describes are all potentially out of date. Although it’s supposedly useful nevertheless, it apparently hasn’t been uploaded to the Internet, either.

Most importantly, it’s lacking in wit. “What’s the difference between a grifter and a politician?” it asks at the start of Chapter 6. “Nothing a grifter sells is 100 percent bullshit,” it answers. King not only wrote this without realizing how banal it is, but also decided it was important enough to use as a chapter header.

I’ll say this: the lack of invention in the book does create a sense of an exhausted world. We easily believe everything’s used up, everything’s grown sick, because there’s nothing original or energetic here. There is a sense of poverty, of griminess, a fecal odor to this future: the book’s obsessed with shit.

Perhaps it fits with Truckee’s class background. Still, his constant sense of living after the end of history feels too knowing for a teenager. And his quest is too abstract, too obviously a set-up; he doesn’t consider it that important—warned of a psychic plague, for example, he doesn’t worry about it. It’s hard to blame him. His world’s difficult to take seriously. Wireless Internet still functions, but nobody has phones. Facial recognition technology has apparently been forgotten. FKA USA feels like a book written by an older man who hasn’t paid a lot of attention to where the world’s at these days.

I don’t have any particular insight into who actually wrote the book. I would assume an older white man, but who knows. I’m more perplexed by the use of a pseudonym. There’s nothing challenging or threatening in the book. It’s hard to imagine anyone taking serious offense at it.