To Die Is Different From What Anyone Supposed 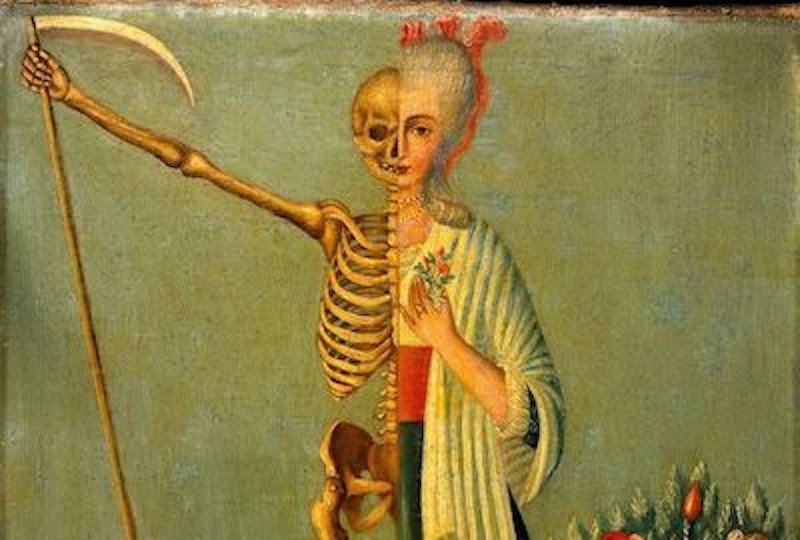 At an overlooked moment in his Essays, Michel de Montaigne writes that “life itself is neither a good nor an evil; life is where good or evil find a place, depending on how you make it for them.” Yet it’s hard for anyone to reckon, before the point is moot, how much good and evil one life shelters in its span. No matter what we do while we’re alive, there’s plenty that we leave unfinished, or that we gape at while it goes awry. There are mistakes that we still might have enough time to mend. Hamlet got it backwards: it’s not death, but life, that “puzzles the will” with its ironies and uncertainty.

Every now and then, however, people manage to outlive themselves. Convicts serving life sentences do, for example, which is why “Folsom Prison Blues” is such a savage, luminous song. Mortally ill people sometimes end up in an equally uncanny position. Leo Tolstoy’s character Ivan Ilych, on his deathbed, glimpses the ugly truth of his life: “﻿It occurred to him that what had formerly appeared completely impossible to him, that he had not lived his life as he should have, might be true. It occurred to him that those barely noticeable impulses he had felt to fight against what highly placed people considered good, barely noticeable impulses which he had immediately driven away—that they might have been the real thing, and all the rest might have been not right.”

Russian literature is full of people like Ivan. Prince Myshkin (in Fyodor Dostoevsky’s novel The Idiot) eventually realizes that “﻿for a long time now, he had not been talking about what he needed to talk about, and had not been doing what he needed to do.” The horror of this realization breaks his spirit, and he succumbs to seizures and catalepsy, dead to the world. A quieter storm breaks over Lambert Strether’s head in The Ambassadors, by Henry James: “﻿﻿I’m too old…What one loses one loses; make no mistake about that. Still, we have the illusion of freedom; therefore don’t, like me to-day, be without the memory of that illusion.”

Outcries of regret like these carry an emotional charge for us, the audience, that can be hard to explain. Is the finality of death, prison, or old age really profound just because—to quote Michel Houellebecq—the goal of life’s been missed? Critics have spent their whole lives on the works of Henry James only to conclude that “the idea of ‘too late’” was some kind of regrettable obsession on James’s part (see, e.g., Berthold 1983). After all, the curtain does have to fall, sooner or later.

Fortunately, these epiphanies that reach us from death’s farther shore aren’t really bemoaning lost opportunities. Instead, they are bits of fire carried down from those Olympian peaks where life appears as it really is: a frenzied circus of petty motives, bootless efforts, and misunderstandings. Death is the greatest moral agent in all of life. It boils each individual down to her most generous acts; nothing else survives. We are the sum of our gifts to the people who will outlive us. Thus it does matter what a dying man decides to regret. His regrets, useless to him, are the bitter correctives that we survivors may choose to adopt.

Literature’s stuffy cousin, philosophy, is always playing a game of death. The philosopher tries to abstract truths about life from human experiences, impartially, as if she hadn’t lived them herself. Baruch Spinoza famously wrote that philosophy should consider the world sub specie aeternatis, “from the perspective of eternity.” Erasmus, in The Praise of Folly, paints a vivid picture of Menippus (who, supposedly, lived on the moon) doing just that:

“If a man like Menippus could look down from the moon and behold those innumerable rufflings ﻿of mankind, he would think he saw a swarm of flies and gnats quarreling among themselves, fighting, laying traps for one another, snatching, playing, wantoning, growing up, falling, and dying. Nor is it to be believed what stir, what broils, this little creature raises, and yet in how short a time it comes to nothing itself; while sometimes war, other times pestilence, sweeps off many thousands of them together.”

It’s a comical picture, but there’s a great deal of forgiveness in it as well. When it’s our turn to die, there’s no longer any reason to stay angry at people who loved us, or cheated us, or whom we envied. Recrimination and bitterness lose their impetus. The facts of life don’t alter just because we die; if we lived forever, we’d still behave like idiots from time to time. But the fact of death, seen clearly and steadily, drags many other things with it into the light. At the moment of his death, when he’s murdered, Lester Burnham (in American Beauty) “can’t feel anything but gratitude for every moment of my stupid little life.”

Philosophy as we know it began when Plato sat down and tried to make sense of the murder of Socrates; the vicious Athenians who killed him to preserve their monopoly on morals become, in The Republic, simple cave-dwellers frightened of sunlight. Their cruelty is pardonable blindness; in order to write about the death of Socrates, in a fashion that honored his greatness, Plato had to make peace with his teacher’s executioners.

We tend to think of “objectivity” as a cold, rational perspective that doesn’t take sides on questions of morality. We associate it with empirical observation and scientific testing. That’s a tremendous misunderstanding. To be objective is to grasp something as a whole. It lays bare the threads that connect a senseless murder in Reno with a “fancy dining car” on a passing Folsom train. It’s realizing, as Plato did, that Socrates couldn’t have become so widely known and admired in a city less dangerous to him than Athens. It means remembering, like Ivan Ilych, the impulses towards something better that one felt, repressed, ignored, all for the sake of a life not worth living in the first place.

Walt Whitman wrote, in his “Song of Myself,” “to die is different from what anyone supposed, and luckier.” For, as he says in the preceding line, “All goes onward and outward, nothing collapses.” To see that, instead of just divining and proclaiming it, is the work of philosophers: those few who teach themselves to die with eyes open.

—This essay was inspired by Michel de Montaigne’s 20th essay, “To philosophize is to learn how to die.”