I Have My Doubts

Somebody always has a hand up the puppet’s ass. 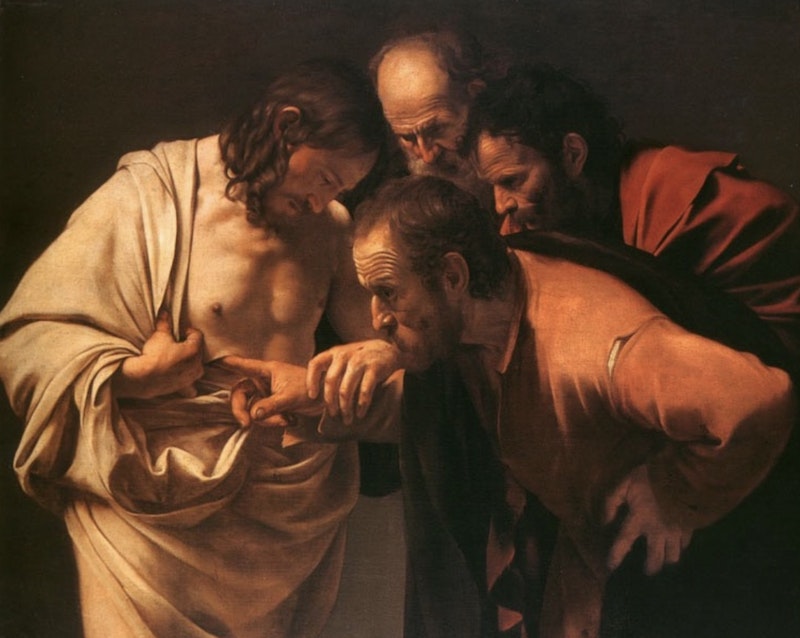 Forget about friendly discourse, casual debate or blind speculation. The words “no doubt” aren’t a pseudo pop band or derivative of the latest slang retort for hip lingo. As in a formula for us to leave, left or leaving no doubt. I was baptized with the Christian name Thomas, after Saint Thomas, one of the original 12 apostles of the Jesus gang. In the biblical days there was only one Jesus. Today they’re everywhere. The greatest fraud perpetrated on people since the invention of god.

My namesake, the first ”Doubting Thomas” didn’t believe Jesus had returned from the dead. He stuck his finger in the messiah’s side between the ribs. A roman soldier had pierced the side of Jesus with a spear while Jesus was hanging out on his cross. Thomas didn’t believe that the resurrected Jesus had risen from the dead. The fresh new Jesus was alive and for real. A sideshow act. A trick that still confounds the faithful. God, in his infinite wisdom, always has a magic trick for true believers. A little song and dance while juggling fire and brimstone. The devil’s pretty good at grand illusions too but nobody tops god’s shtick.

True to my name in every way, a non-believer. In the case of Jesus, truth is an empty tomb of lies. Supernatural gumbo of mumbo jumbo. Nailed to a cross and rising from the dead is a hard sell. Even Lazarus had his doubts when Jesus told him to wake up from the dead and answer the call to glory. Jesus was one hell of a miracle man. Changing water to wine, walking on water, bringing back the dead. Jesus was no slouch, no second-rate grifter on the corner playing Three Card Monte. Jesus Christ deserves an award. Our reward for believing is eternal life in some heaven where nothing ever happens. But Jesus couldn’t compete with his almighty father. It’s a real head-scratcher mystery.

The concept of time itself eludes me. A mechanical construct to explain life in increments of days and nights. The darkness evolving into light and back again. Months into years melt into that one long time all the deluded grow accustomed to. It’s here nor there for a cynic of my own existence and demise trapped in my thick skull. Home is where I hang my doubts. The alpha and omega striptease of apprehensions. Life on planet earth has reached the point of no deposit, no return. No taking back the items of our discontent for a refund of uncertainty. Left with an aching fear of crowds and a pleasant confusion. There’s no real estate in the modern landscape. It’s all talk without substance. Living lies in a dead culture. Civilized fossils living in body bags.

Somehow we muddle through the muck of today, some different world of accumulated lifetimes. Tomorrow’s not enough. Floundering upon shores of doubt. Self-loathing is in vogue. Gratitude is selfish. No rest for the wise or the wicked. True happiness is that dangling carrot just out of reach. The hot dog stuck in a donut of desire. The wheels of justice turn so slow. Little gears inside make the eyes move and the mouth open and close. The last supper or the buffet dinner leaves growling bellies hungry, aching for more. It doesn’t matter and it never did. Somebody else always has a hand up the puppet’s ass. Fooling each other into freedom from inside cages. Knowing how we got here is half the fun. Rattling chains and cursing the lies we tell each other to keep the peace. There’s no way out, all the escape routes are blocked. The detour is closed. My head’s an abandoned carnival. It’s no wonder we’re crazy. Keeping it real in the funhouse mirror. Yearning to dream in the dreams of others. Nobody but you. Anyone but us. Please… is there anybody home? It can’t possibly be true that we’re the only ones here.

There must be somebody out there. Someone besides me to contradict myself. To disprove my bullshit from yours. No need to know any good jokes, they’re everywhere. My shortcomings are only exceeded by my misgivings. Who am I to doubt ? Who are they to know? To negate you and separate us from them. When is enough simply enough? Do I exist without thinking I'm here? Bears do shit in the woods and when a tree falls the shitting bear and all the other trees hear it too. Its rise and shine for the deep sleep. Fun and games for the disillusioned. Wake up to the reality of now and never. I still have my doubts. My own worst enemy. There’s no doubt about it.