Long-lived taverns of prohibition and beyond, framed celebrities on walls. 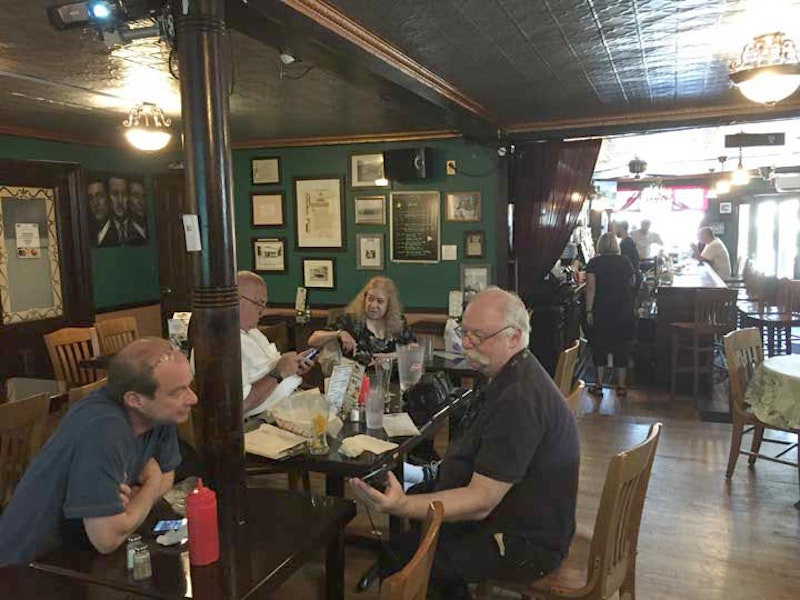 I was flabbergasted last week when the word came that Neir’s Tavern, 78th St. at 88th Ave. in Woodhaven, was closing. According to some sources, it opened in 1829 as the Blue Pump room with its first owner Cadwallader Colden, a relative of the NYC mayor by that name. At first, it served patrons of the Union Course, a nearby racetrack; this was years before the area was developed and houses and streets built. The Pump Room survived under a variety of names and ownership long after the racetrack closed, and when Louis Neir bought it in 1896, his name survived the subsequent decades. According to legend, Mae West was a patron and would sing to entertain the other barflies.

When Martin Scorsese was filming Goodfellas, he shot bar scenes in Neir’s for its old-timey NYC atmosphere. Neir’s proudly wore its age, with its voluminous wooden bar, pressed tin ceiling, framed photos from decades past, and incandescent lighting. In decades past, the bar had included a bowling alley.

In 2009, FDNY lieutenant and Jamaican immigrant Loycent Gordon headed a group that purchased the bar itself but not the building, to which they had to pay rent. In a familiar story, new building ownership drastically raised the rent, Gordon was unable to negotiate an affordable one, and reluctantly announced that Neir’s would close on January 12th. In 2016, he attempted to get the Landmarks Preservation Commission to designate the bar without success.

Whenever I was staggering through Woodhaven in the dog days, I always knew I’d be welcomed at Neir’s. I dropped a game of Queens Jeopardy! there a few years ago. As it happened, Gordon called the “Ask the Mayor” segment on WNYC radio Friday morning to explain his plight. Mayor Bill de Blasio set up a meeting of the Queens Chamber of Commerce, Gordon, local politicians, and the building owners and hashed out a new agreement that included a new five-year lease. In addition, the city kicked in a $90,000 grant to Gordon and partners for building improvements. The news, leaked earlier, was announced by De Blasio at a packed Neir’s. 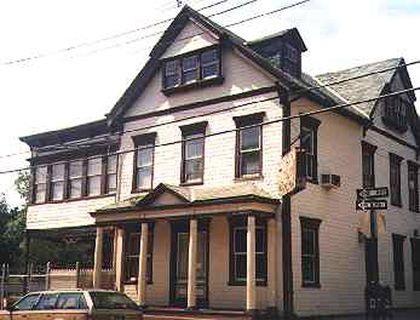 I’d long known about Flessel's, even before I moved to Queens in 1993, from its description in the AIA Guide To New York City. I admired its out-of-time quality, at least from the meager photographic evidence. After moving to Queens, I’d talked about getting up to Flessel's for a drink or a meal. But I’m a procrastinator, and it never happened. Flessel's closed for good in the spring of 1998, the property was sold, and the building was demolished in December of that year.

The building that later became Flessel's Restaurant was originally built by Joseph Witzel, a College Point landowner who also built a long-gone resort called Point View Island in Whitestone. Probably the only reminder of Joseph Witzel's former holdings in the area was the "W"s on the columns of the side porch that remained throughout the tavern’s many ownership changes.

Over the years, the building changed hands a few times. It has been used as both a hotel, bar and restaurant throughout its long history. It’s been known as Witzel's, Eifel's and then, Flessel's over the years. German food and drink was a specialty as a rule. Incredibly, Flessel's was never named a landmark by New York City, which would’ve saved it from extinction. Local preservationist Paul Graziano said in an interview with the Whitestone Times in June 1999, shortly before the building was razed: "It's a perfect example of a building that should have been landmarked 30 years ago but because of the politics in Queens, it never was."

Flessel’s ornately carved bar featured a solid onyx rail imported in 1903 and beveled glass behind it. Its exterior signature was its ancient neon sign that dated to the 1930s. The tavern had upstairs rooms that were lodgings at one time. 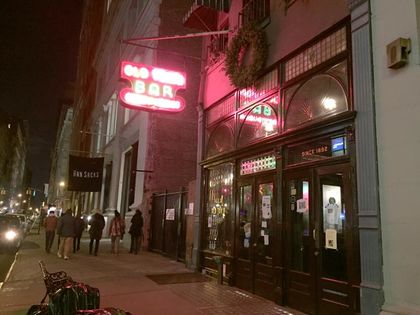 My affinity for classic bars began in the summer of 1981, when I worked for a textbook publisher called Lexigraphics at 150 5th Ave. at 20th St. I was there for just one summer, but I’d meet friends at the Old Town, on E. 18th between Broadway and Park. What I remember is slouching in from the hot, humid street into the ice-cold air-conditioned interior and colder beer. I never developed an alcohol addiction but did develop an addiction to classic spaces, and the Old Town delivered it from its wood-paneled walls, huge marble and mahogany bar, comfortable booths, and large windows. Buzzers to call waitstaff are still in place at the booths.

Originally a German establishment called Viemeisters, the bar has been in continuous operation since 1892. When it first opened, Viemeisters was a place that served just drinks, but during Prohibition, the bar was forced to change its name to Craig's Restaurant and start serving food in order to operate as a speakeasy. After the end of Prohibition and the closing of the nearby 18th St. Subway station in 1948, the bar fell into disrepair. It wasn't until the late-1960s, when local bar manager Larry Meagher took over operations, that the bar saw a resurgence of popularity. 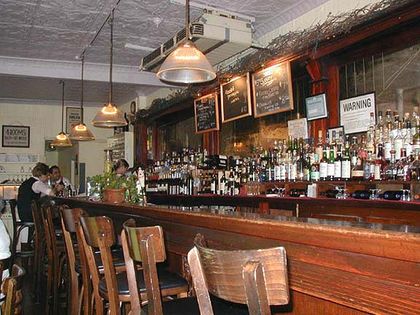 According to sources such as the late Richard McDermott of The New York Chronicle and Steve Redlauer and Ellen Williams of The Historic Shops & Restaurants of New York, the Bridge Cafe, at Water and Dover Sts., is the oldest establishment in NYC that has continuously been run as a tavern. In a number of different guises and many different owners, it has been here in a corner building since 1794.

Previous tenants have included the Hole in the Wall, operated by One-Armed Charley Monell. An 1847 visitor to the Hole in the Wall would’ve had to contend with Monell’s two barmaid/bouncers, Kate Flannery and Gallus Mag. The latter was said to have a habit of biting off the earlobes of especially unruly customers. Charley kept a jar of pickled earlobes over the bar. It doubled as a brothel in the 1870s, when it was run by Tom Norton. Dog-fighting and rat-baiting were popular entertainment in that era.

It’s been known as the Bridge Cafe since 1979. It was built on the water’s edge, as Water St. marked the original shoreline. The Brooklyn Bridge behind it went up in 1883. It was originally listed as a “grocery and wine and porter bottler”; in that era, groceries sold wines and spirits and were issued liquor licenses. The Bridge Café closed in the aftermath of Hurricane Sandy in 2012, and there’s no timetable for a reopening. 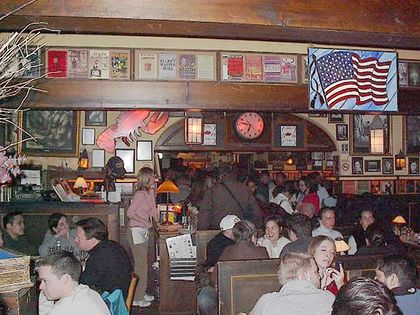 Chumley’s, at 86 Bedford St. in Greenwich Village, is probably the only major bar or restaurant in New York City that has never had a sign or marking of any sort on its exterior to mark its presence.  Chumley’s building dates to the 1830s and was originally a blacksmithery. According to legend, in the pre-Civil War era it was a stop where escaped slaves could find a haven (there was an African-American community on nearby Gay St.). At length it became a gathering place for leftist radicals. By 1922, Leland Chumley had established a speakeasy/gambling den in the old building; the tradition of not marking the entrance continues to this day.

During and after Prohibition Chumley’s became one of NYC’s many literary hangouts. The difference here is that the authors’ original dust jackets, and their portraits, line the walls of the place on all sides. You’ll find just about every big name in 20th-century literature here from Hemingway to Mailer to Ginsburg on the wall. And mine, as well. The Forgotten New York cover was framed and hung during a book party in September 2006. After a wall collapse in 2007, Chumley’s remained closed for nine years, but it reopened under new management in 2016, with reportedly less charm and a more chi-chi clientele in mind. 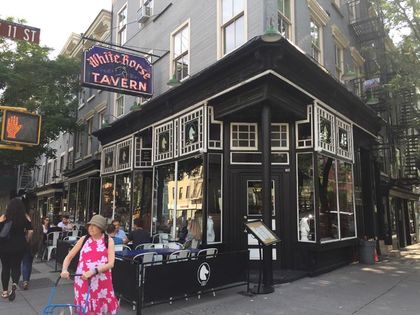 The White Horse Tavern is another of NYC’s long-lived literary hangouts, and yet another with an ancient neon sign. It’s been on Hudson St. and W. 11th since 1878, replacing the James Dean Oyster House. Dylan Thomas, the story goes, drank himself to death at the White Horse in November 1953, but it’s more complicated than that: the writer had been ill that year, and a number of factors likely contributed to his demise.