I Have a Question For White Girls With Braids 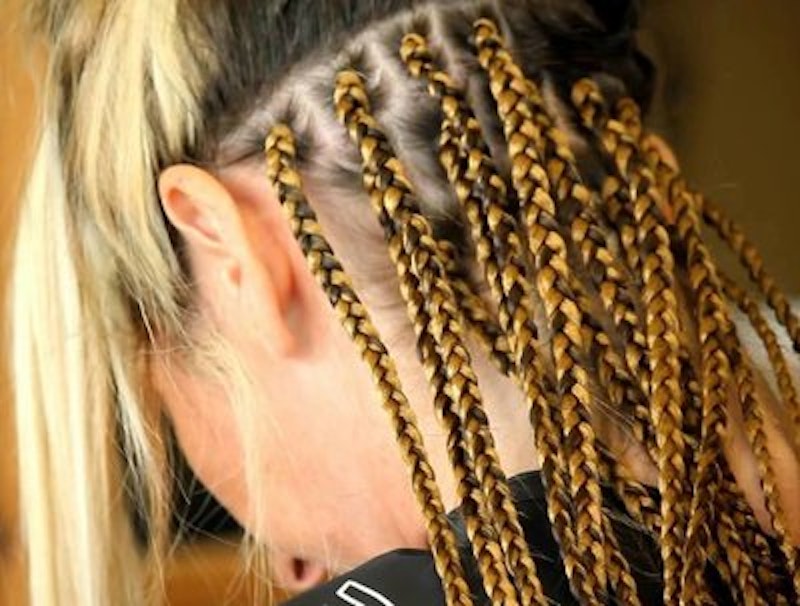 Apparently the hottest hair trend of the moment, in Berlin anyway, is white girls with braids. Not just any type of braid, though. I’m talking long, braided extensions that take hours and hours to do. Think Beyoncé in Destiny’s Child. I’ve even seen fashion divas with cornrows a la Queen Latifah in the movie Set If Off. The utmost! The first time I saw a white girl with braids I was like, “Hmm, interesting…” But now I’ve probably seen it on like 20 different girls all around the city and the shit has me completely fascinated. I ain’t even mad. I just don’t get it.

To my white queens: do you, boo. Hair is personal and you can style it how you want to. I’m not mad or pressed. All I’m saying is that I see you, and within the sphere of cultural appropriation, white girls with braid extensions seems like a stretch.

It reminds me of something Madonna said in Rolling Stone at the start of her career. When the interviewer asked Madonna if she felt “black” here’s what she said:  “Oh, yes, all the time. That’s a silly thing to say though, isn’t it? When I was a little girl, I wished I was black. All my girlfriends were black. I was living in Pontiac, Michigan, and I was definitely the minority in the neighborhood. White people were scarce there. All of my friends were black, and all the music I listened to was black. I was incredibly jealous of all my black girlfriends because they could have braids in their hair that stuck up everywhere. So I would go through this incredible ordeal of putting wire in my hair and braiding it so that I could make my hair stick up. I used to make cornrows and everything. But if being black is synonymous with having soul, then, yes, I feel that I am.”

For me, these kinds of braids have always been a black cultural thing and it’s hard for me to see otherwise. Black mothers braid their daughters’ hair in little plats as soon as the first piece of hair pops out of their heads. I have so many memories of my sister sitting in the living room on the floor between my mom’s legs watching TV while she got her hair braided. Over the 10 hours it took to put the braids in she went between crying because it was painful and looking totally bored because she had to sit still for so long while her head got yanked in all kinds of different directions. “Hold your head up!” my mother told her.

But after it was done she always came out looking fabulous. The first few days her scalp was tight and that led to inside jokes between us that we still laugh about today. She always had to “tie her hair down” with a scarf at night because if she didn’t, her braids wouldn’t stay fresh for as long.

My mother braided my sister’s hair because it was stylish, but the real reason is that she could send my sister off to school and out into the world looking presentable and didn't have to worry about doing her hair every single day. When you’re a single mom who’s also putting yourself through graduate school, like my mom was, you don’t necessarily have time to fix hair every morning. Practical and stylish, all in one.

When I started wearing my own braid extensions a few years ago I felt like I could finally understand what my sister went through all those years. I had a girl in the Bronx who gave me the hook-up every couple of months. The scene was so familiar: sitting between her legs on the floor for hours, watching the Food Network, eating pizza or whatever, gossiping about men and sex, feeling fabulous at the end.

The first time my then-boyfriend (white) saw me at night with my hair tied down with a t-shirt he laughed, maybe out of surprise because he’d never seen me like that before. I had to explain the whole thing to him. Do white girls with braids and cornrows have the same conversation with their partners?

Hair is never simply hair. It’s also culture. Hair is style but also politics. Will an on-trend white girl with cornrows or braid extensions be denied work or told by her boss that her hair is unprofessional?

The thing that makes me uneasy about white girls with braid extensions, and why for me it’s a mile marker too far past the cultural appropriation bridge, is that it’s a clear example of how blackness gets treated as something you can make a trend or hipsterify or put in a pop-up shop and pick or chose from without any connection to blackness or black people. It’s about having all the taste but none of the calories.