My sole pair of loafers, purchased in 1992, gathers dust. 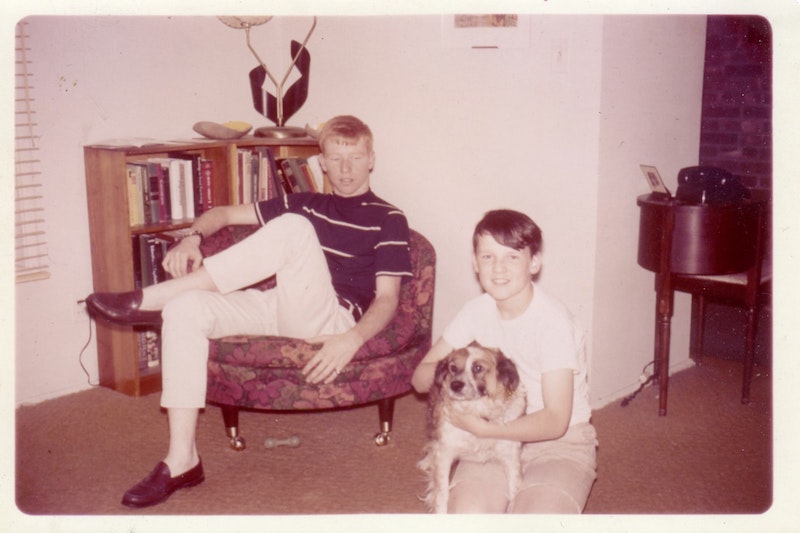 Given that my footwear today is limited to Puma sneakers I appropriated from my younger son and ugly but water-resistant off-orange work boots, I was mildly taken aback last week upon reading a Wall Street Journal article heralding a “Big Moment for the Loafer." I can’t remember the last time I wore loafers, although a pair I bought in Milan gathers dust in our basement, and frankly, my memories of the slip-on (or shoe-horned) shoe are mixed. As a kid, once I entered second grade, loafers, specifically Bass Weejuns purchased on sale at a nearby Thom McAn in Huntington, was the shoe I wore. At least on weekdays: Sunday school and church required jacket, tie, and lace-up clodhoppers. In the 1968 photo above, my brother Gary is on the left with his Weejuns, while I mug for the camera with our dog Scuttle. He left for college that fall and I can say with certainty that the Weejuns were left behind at 123 LaRue Dr., in favor of Frye boots and Converse sneakers.

West’s Journal article didn’t really square up with the facts as I know them, as his first sentence—“The loafer, that 1980s preppy staple, has stepped back into the spotlight”—indicates. The Official Preppy Handbook (1980), edited by Lisa Birnbach, was kind of a big deal, but I never read it, mostly because I was never a preppy as a teenager and by the 1980s had zero interest in that kind of pulp. Besides, I thought preppies had morphed into yuppies at that point. West acknowledges the loafer’s “association with blue bloods and the Ivy League,” and I suppose that’s how the loafer was introduced to my brothers and me, as the two oldest did go to Ivy League schools (scholarship kids) in the early 1960s. Some years I went with brown, others black, and that was that: I’d never even heard the word “cordovan” at the time. Oh, and none of us ever put pennies in the up-top slit.

But fashion changed so radically in the mid-1960s that by the time seventh grade rolled around, I wore loafers on my first day at Simpson Jr. High School, along with white socks, tan jeans and a wash 'n' wear dress shirt, and caught a lot of guff from a rich kid in the halls, who said to his buddy, “Look at that drip! What a spaz!” This rattled me, since the Smith Boys were always considered cool, even if our wardrobes were cobbled together from discount stores, flea markets, and the like. (By the way, I take no pleasure in the fact that this tormentor was a crummy student, and by ninth grade a juvenile delinquent, which probably means he’s working in some insurance company today, shuffling applications until it’s time for cocktail hour.)

It’s not like I could re-jigger my appearance immediately, but soon after switched to desert boots (a precursor to the dreaded hush puppies), Lee blue jeans, and t-shirts. Not exactly peer pressure—I didn’t consider the nitwit who taunted me a “peer”—but just a reassessment that teens go through periodically. I guess by 10th grade, when friends and I would greet each other with “Right on!” rather than today’s fist-bump, the uniform was naturally faded jeans—and when a hole appeared in the knee it was colorfully patched, a la Neil Young—construction boots or sneaks, flannel shirts in the winter, and always solid color BVD t-shirts with that handy pocket for a pack of smokes. And can’t forget the Sperry Top-Siders, those brown boat shoes that looked great once they were worn in, and relatively rare in Huntington. Of course, when I started school at Johns Hopkins in 1973, and most of my friends were from various Northeast private schools, it seemed like everybody was wearing them, which bugged me. My roommate, from a Jesuit high school in Houston, was, not surprisingly, wearing cowboy boots, and he fixed me up with a guy who sold handmade numbers, and so soon I was wearing a really cool burnt orange pair with light-green stitching.

That’s the loafer and me. A trivial anecdote, I know, but the Journal article did dredge up some childhood memories, and that’s not so bad. I’ll leave with a hilarious caption accompanying three photos with the story: “Actor Ryan Gosling, widely admired for his style, wears loafers on the red carpet earlier this year. ‘Today’ host Matt Lauer, a longtime loafer wearer, wears them at a screening with his son last summer. During the Olympics, Mr. Lauer set social media ablaze for wearing loafers with no socks [so?] while interviewing swimmer Ryan Lochte. LeBron James wears Gucci loafers while appearing on ‘Good Morning America’ this summer.”

Another trend I’m missing out on, thank God.