The bleak wasteland of unpacking. 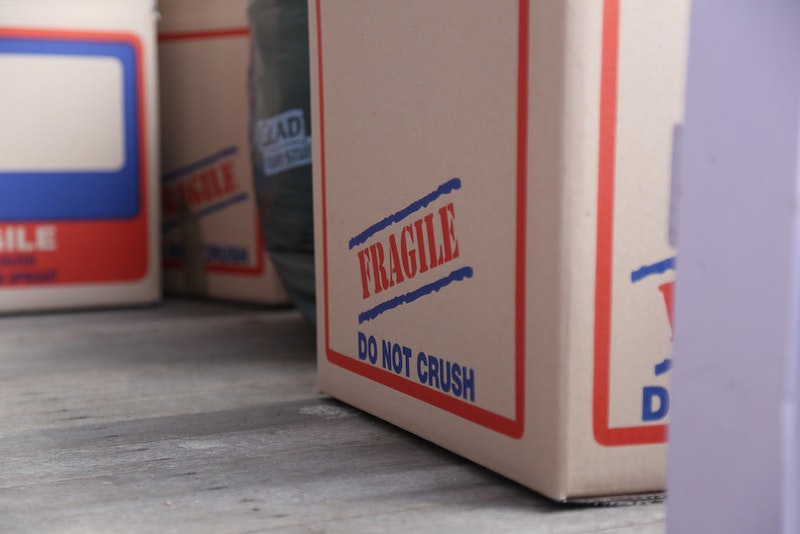 The giant sofa bed, it turns out, won't fit in our new house. My parents actually bought it for us; my dad has back problems, and this sofa is the one sleep option that doesn't exacerbate them. So they purchased it for when they visit. It’s about 400 pounds; the movers had to take our door off initially to get it in our old home.

The movers this time were more enterprising and tricky; they whooshed it out with no problem. But as soon as they saw our new, smaller residence, they snorted derisively, and then heaved the sofa halfway through the front window, where it sat, blue and enormous, like a sad beached whale, testament to our excess of crap and general shame.

Okay, I exaggerate; the movers didn’t heave the couch through the window. They put it in our tiny garage where it prevents us from parking our car. Our front windows remain intact, though from outside you can see boxes and paintings and knick-knacks stacked haphazardly.

The kitchen has more or less been carved out of the chaos, but the dining room is packed ceiling-high with boxes that, it turns out, we needed to label better since we don't really have any idea what they are. It’s a happy mystery. Where are our comforters? Where’s the toaster? I ask the dog these questions. In response, he scurries off and demonstrates that he hasn’t had much experience with stairs by falling down them.

There are good things about the new place. We're in a two-flat with my mother-in-law now, and a basement, which means that my 12-year-old has fulfilled every teenager's dream of living in a basement. There's also a little yard, which the dog has embraced with enthusiasm and the cat with more reservations. So the boy and the dog have more room.

Not so for the rest of us. We explained to the movers that we’d gotten rid of an absurd quantity of crap; probably 100 boxes of books, 30 bags of clothes, countless mountains of garbage. After 15 years of swallowing refuse, our home hacked and gagged and spit it all back out.

The movers, lugging the boxes that remained, were not especially impressed, and looking at all our detritus piled up against the walls, it’s hard to feel we've really simplified in any way that counts. In the normal course of things, the stuff you own serves some purpose. Maybe you'll want to read that book someday, and tools are useful, at least in theory, right? When you move, though, everything is a weight and a rebuke. Old cans of beets from three years ago remind you that you don't like them anymore; paintings given to you by friends that don't fit on the wall; college textbooks that you've dragged to several apartments and now admit that no one cares what you thought about Kant in college. Not even you.

Presumably, it’ll get sorted out. We'll know where our underwear is again, the clothes that no longer fit will be shoved into some corner; someone will take the couch away. Home will no longer be a bleak reminder of waste and mortality, but once again just the place where you stack your stuff so you don't have to think about it.