From Gen. Sheridan to the Stonewall Inn. 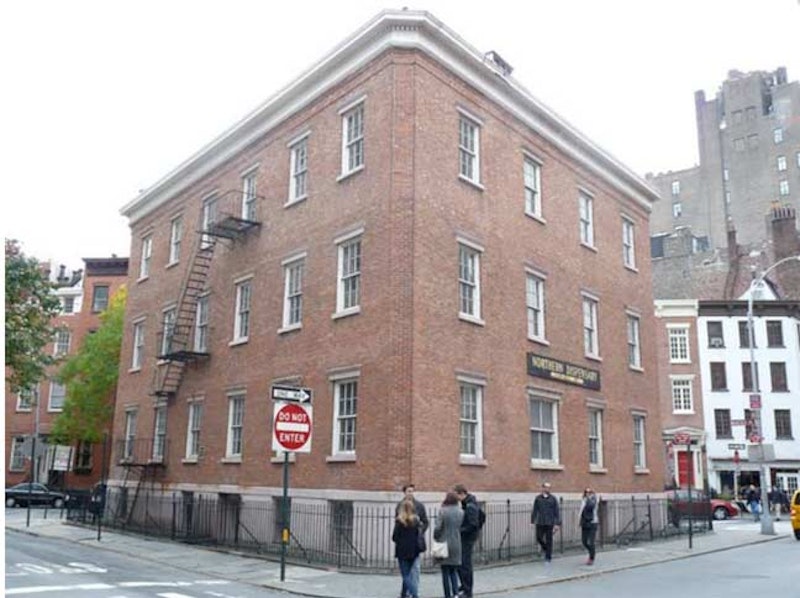 In many ways Christopher Street can be called the main east-west street of the Village, as it existed as a road to the river long before its parallel streets were laid out. When Charles Christopher Amos purchased the plot in the early 19th Century, he had the three streets laid out from east to west named for him; “Amos” has since become a western extension of West 10th. The roadbed of Christopher Street lies on a much older, colonial-era road: the Skinner Road, named for Colonel William Skinner, whose father-in-law, Peter Warren, owned much of Greenwich Village in the pre-Revolutionary era. Today, Christopher Street may be synonymous with the gay-rights movement, which originated in the modern era with the Stonewall Inn riots in June 1969 in the still-open tavern of the same name, now a NYC Landmark. The rest of the street, however, bears much hidden NYC history along its length.

Above is pictured the Northern Dispensary, which occupies the triangle formed by two sections of Waverly Place and Christopher. From 1831, when the building was completed by local artisans John Bayard and John Tucker, to the late 1980s, free medical treatment was available at the Dispensary. Though the clinic itself closed a couple of decades ago, its old signs are still there. The Greenwich Savings Bank was founded in this building in the 1830s. In that era, this was indeed a “Northern” part of New York City. According to Dispensary records, Edgar Allan Poe was once treated for a cold here in 1837, and singing star Jenny Lind, the “Swedish Nightingale,” was treated here too, no doubt to keep her golden pipes at peak condition.

Sharp-eyed enthusiasts will note a slight change in the color and layout of the bricks above the second floor; the third floor was a later addition, in 1854. 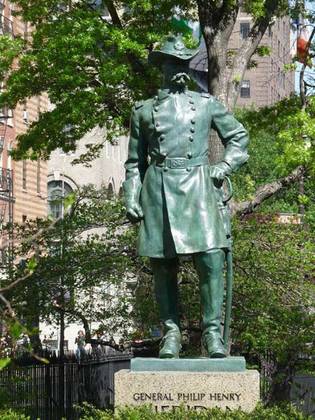 7th Avenue South was created in 1912 by the extension of the original IRT subway through Manhattan’s lower west side from Greenwich Avenue south to what had been the junction of Varick, Clarkson and Carmine Streets, while 6th Avenue (which wasn’t given the suffix “South”) was rammed south from Carmine and Minetta Streets to Franklin and Church Streets in 1928 when the new Independent Subway needed a right-of-way. Both of these street map alterations required the condemnation and demolition of countless properties, and the alterations of almost as many. One of many traffic triangles is formed by Grove and Christopher Streets and 7th Avenue South. In it, across from the Stonewall Inn, is a statue of Civil War general Philip Henry Sheridan.

The statue, by sculptor Joseph Pollia, was installed in 1936. Sheridan is regarded as the most dynamic and popular officer of the Union Army during the Civil War. In the summer of 1864, Sheridan oversaw the ruthless destruction of the Shenandoah Valley, eliminating the Confederate army’s major source of food and supplies. That fall, General Sheridan rode more than twenty miles to rally his troops to victory after a surprise enemy attack.

After the war Sheridan fought in the Indian Wars in the Plains territories and was known for his harsh measures against Native Americans and brutal elimination of millions of buffalo. Sheridan denied uttering the phrase “The only good Indians I ever saw were dead” or its variant, “The only good Indian is a dead Indian.” The phrase was, though, paraphrased by a gorilla military officer in Beneath the Planet of the Apes.

The square was named in honor of Sheridan in 1896 and was a concrete traffic island, with the statue, for most of its existence. It wasn’t until 1982 that the local Sheridan Square Triangle Association successfully petitioned the Parks Department to excavate the site and install plantings. Native American artifacts were discovered during the digging. 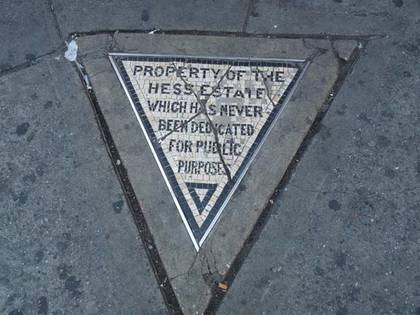 The small building hosting Village Cigars has had this small mosaic triangle directly in front of the store entrance since the building was constructed shortly after 7th avenue was cut through the neighborhood gains the grid in 1912. It was likely the smallest piece of private property in the city.

There used to be a five-story residential building on Christopher Street called The Voorhis. It was condemned in the 1910s to make way for the IRT subway, which also extended 7th Avenue south from Greenwich Avenue. However, the Voorhis’ owner, David Hess, refused to surrender this small plot to the city to become part of 7th Avenue South’s new sidewalk. The Hesses created this mosaic to let everyone know of their small (very small) victory against the city.

Village Cigars moved to its present corner site in 1922, and bought the 500-square inch property from the Hesses for $1,000. The mosaic has stayed put, while Village Cigars has become an iconic symbol of the Village. The Hesses sold their triangle to Village Cigars in 1938, but there it remains, a monument to good old fashioned spite. 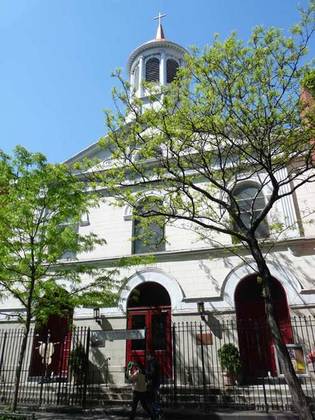 The cupola of St. John’s Evangelical Lutheran Church dominates Christopher Street west of South 7th. The building has stood since 1821—it was built as the 8th Presbyterian Church and became St. Matthew’s Episcopal in 1842 and finally, St. John’s in 1858. This was also a historic church site prior to 1821, since Hartwick Seminary, the first Lutheran theological seminary in America, was founded on this site in 1797 from the will of churchman John Christopher Hartwick. 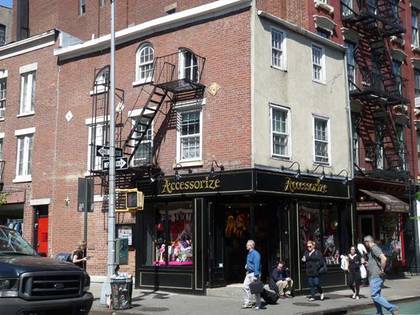 At Christopher Street, Bleecker widens briefly and turns gently east-southeast, beginning a general eastward turn that will actually point east-northeast by the time the street reaches The Bowery. According to the Manual of the Corporation of the City of New York, the widening was done in 1827 when Bleecker was still called Herring Street, necessitating the removal of three houses, and apparently was done as part of the straightening of Grove Street, one block south of Christopher.

The small 2-story building at the NE corner of Bleecker and Christopher, #329 shown above, is one of the oldest in Greenwich Village; it was constructed during the Thomas Jefferson administration. 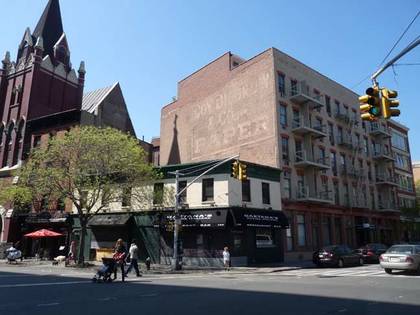 The former Coy-Disbrow Paper Company ad has faded, but not illegibly. Actually this ad is younger than some of the other ones of its type. The company moved to this building on Greenwich between Christopher and West 10th in 1930; the wholesale company had been founded by Robert Henry Coy (1877-1942) and Hamilton Thomas Disbrow (1852-1942) in 1922 on Canal Street. Disbrow was called “dean of commuters” of the Delaware, Lackawanna & Western Railroad after traveling to the city from New Jersey every day for over 70 years. The building beneath it was constructed as early as 1819.