I Grew Up in the Drug Culture, and Sort of Miss It

Being criminals in the 1970s turned us into anti-authoritarians. 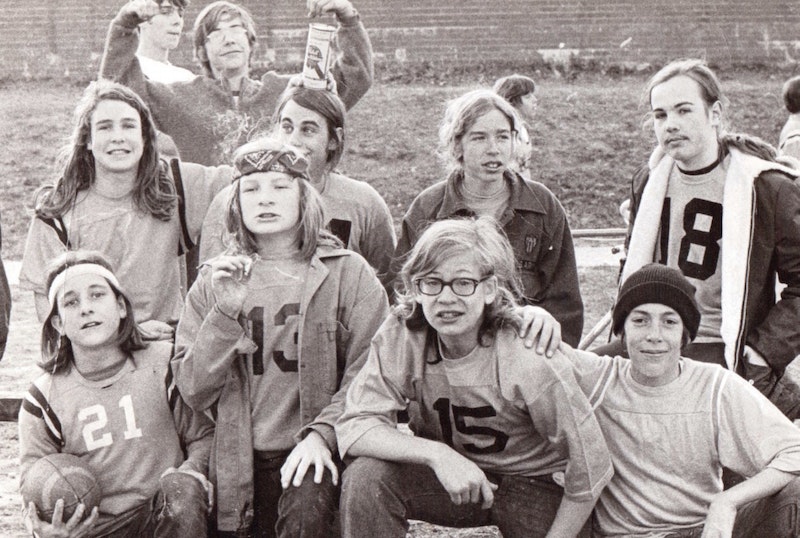 Looking back from where we are now—the era of legal weed and an apparent consensus that the war on drugs and mass incarceration were decades-long moral disasters (that is, political strategies)—it might be hard for today's youngsters to understand what things were like in the drug culture of the1970s. In this case, I think, “culture” is the right term: it was an entire resistant ethos, with rituals and texts (by Abbie Hoffman,Timothy Leary and Carlos Castaneda, for example). It was an underground world, featuring perhaps a third of the American population.

"Drugs," particularly pot and psychedelics, had a cultural meaning; they weren’t just a disease or a problem or even a relief; they were, for us, symbols of the fact that we were a different generation and sort of people than our parents and principals. Drugs were aesthetic: they affected our music and design arts and our heads fundamentally, and they were political, signaling open-mindedness and anti-authoritarianism. That's a bit too much symbolic weight to place on substance abuse, I admit. But the power of the drug culture was in large measure derived from the sheer fact of illegality. Each of us was a criminal, and we were all criminals together. That what we were doing was illegal made it seem like a form of resistance.

I grew up in DC, just off Connecticut Ave. in upper northwest, where my circle of friends and I started smoking pot when we were 13 or so, circa 1971. We accounted ourselves as young hippies, junior members of the counterculture, baby revolutionaries. But as the 1970s and our teen years went on, hippiedom lost momentum, disco replaced psychedelia, cocaine infiltrated the brains of potheads, and the peace and civil rights movements faded. And so being in the counterculture started to lose its meaning; it signified little but that we did drugs, of a certain kind on certain occasions (or perhaps all occasions). Our parents poured cocktails at 5:00; we smoked dope all day. The drugs were partly an expression of 1960s idealism, but also had their role in its end; middle-class potheads, to say nothing of serious cokeheads, are unlikely to be effective revolutionaries.

My brothers Bobby and Adam were pot dealers: Adam better than Bobby, because B did all the drugs before he could sell them. They were small-scale, relatively, but the person they usually bought from was also just a kid who lived down on Nevada Ave, with obscure but useful connections, able to wall off the Chevy Chase region with bricks of terrible Mexican weed. Early on, we'd gather in Bob's room in the attic, cast black light over a Hendrix poster, and pass the joints around, taking ourselves to be having experiences. When the emphasis shifted to acid and mescaline, the experiences seemed to grow more profound: we saw through the whole pathetic conventionalized reality of our parents and Richard Nixon. That last sentence is, I admit, unfair to my mother, now 95, who had plenty of progressive tendencies, but I'm talking about the cultural symbol-system in which “parents” were “the establishment,” “the man” in our very own houses.

Drug culture was characterized above all by its secrecy. Or rather, it created two worlds, the surface world of conventional appearances, and the covert criminal underworld, in every neighborhood in the city. We delighted in a situation in which parents, school administrators, and so on, had little idea of what was going on under their noses (though sometimes they picked up a little scent). By the time I was 16, I was embedded in an alternative economy. People had jobs in it, were figuring out how to invest (or even bury) their money. It had its own laws, institutions, values, the first commandment of which was "Thou shalt not snitch." It's true that we more or less thought that someone who'd go to the authorities did not deserve to live, though at our low level we never physically harmed anyone, just issued dire threats.

I got kicked out of the DC public school system at 16, not for drugs, but for political activities, ranging up to threats of violence against the school. By that time, I was living in a whole anti-authoritarian youth culture. We were all criminals, and that drove us toward anarchism, a dedication to evading and undermining authority that went well beyond the drugs. We were bourgeois white kids, and we were criminals, and we were proud of that. In the extremely racially polarized DC of my youth, two of the few things that crossed racial lines were drugs and the Redskins. Black and white druggies and dealers visited each others' neighborhoods, unusual at the time. Alice Deal Junior High was in a bit of a race war. Dealers and potheads reached across the line.

Post-expulsion, I ended up at a "free school" known as BonzoRagamuffin Prep: around 20 kids in a storefront in the Adams-Morgan neighborhood. We were kids who couldn't make it in the public schools for a variety of reasons, including drugs, mental illness, being a runaway, or, in several cases, being a straight acid or PCP burnout case. We ended up with transcripts claiming that we'd taken classes, but the only ongoing programs were group therapy and drug use. The staff were potheads too.

My “senior year” we took a class trip for three days to Chincoteague. We may have been kind of noisy. One night at 3:00, 12 state troopers stampeded in through front door. They made a pile of drugs in the middle of the living room (though they also included things like soap powder, asserting it was coke), and demanded that people say which was whose. We agreed among ourselves that we would do so, so that they wouldn't drag everyone off to jail simultaneously. I had managed to drop my vial of hash oil through a hole in the floor, so none of it was mine. But they did arrest the whole staff and a bunch of the kids including my girlfriend and her sister (who was my brother Bob's girlfriend). They charged the teachers with contributing to the delinquency of a minor (they found the headmaster in bed with one of the students, for example). That was the end of my school. I took it merely as another sign of idiotic evil of the powers-that-be, which was pretty much my conclusion from any data set in that period.

I moved out of the parents' house at 18, and started college, unlike most my friends. I lived in a group house out near NIH (not quite a commune; it was a year too late for that) whose wild sit-com cast included a person, initials JT, who must’ve been one of the biggest coke dealers in Bethesda. There was a constant stream of all sorts of people through that house: bikers and strippers, black and white dealers, hilarious party people and desperate coke addicts. We were worried about the bust moment by moment, of course, but JT seemed to have some sort of arrangement.

That he was living in a bedroom in a house with five guys and working as a car mechanic was part of the strategy: JT had a spot in the woods near his uncle's house where he stashed his own cars and his boat. He had hundreds of thousands of dollars buried there too, or so he claimed. I believed him completely, because I saw the commerce and extremely modest lifestyle. It was a very slick approach, really, and almost no major dealers have that kind of self-discipline.

So we never did get busted, but that's not to say that there weren't problems. My drug culture went terribly, terribly wrong. Living in that house in Bethesda, particularly after the freebasing started, was something of a nightmare: it seems that once you freebase you can never think about anything else again. My brother Jim, a heroin addict, did five years in the state pen in Hagerstown for armed robbery. He eventually got sober after a subsequent run as a crackhead, but died in his early-50s of the long-term effects of a number of addictions: with hepatitis, diabetes, lung and heart problems; I'm not even sure what killed him, really. My brother Bob died in a shooting that had something to do with a PCP deal. My younger brother Adam died of an overdose before he made it to 30.

One thing that hurt my head about all that death and destruction was that it more or less confirmed Nixon's picture of drug abuse, used as a justification for the "war" on young people, black people, and so on. Nevertheless, I'd be lying if I said that the whole thing was really fun and great; it definitely didn't end that way, not for Jimi and not for us. The whole disaster was collaborative: the police and the dealers accomplished it in tandem. The authorities' many achievements in this regard included thinking that prisons made reasonable treatment facilities, or just not giving a shit about what happened to the wrong sort of people. That made it doubly clear to us, the wrong sort of people, that we should try to do whatever those assholes were telling us not to do.

Now I've got my medical card, and I can be a pothead without being a criminal. I'm grateful for that in many ways; drugs and the war on drugs killed my brothers and many of my friends. I’m grateful that the war has eased, and that people are thinking about these things differently. It took those idiots long enough.

But I also feel remarkably staid and boring. After that youth, I got sucked into the establishment. What I'm doing now isn't even as bold as cocktails at five: it's a doctor's prescription; it's healthcare. Nothing like my youthful sub-culture can happen except in the context of demented authoritarianism of the sort that led to mass incarceration. American authorities circa 1972 declared war on their own people, and made us all into practical anarchists. Even if we ended up doing the wrong drugs, we ended up believing the right politics. I guess we have the police to thank for that.

I'm still basically opposed to snitching, and to all hierarchies of power, and to prisons. I surprise myself, even now, by having an almost preternatural sensitivity to the proximity of police (“that's an unmarked car”), even though it's been years now since I really committed a felony. I've tried, hard, to maintain the basic antiauthoritarian turn of mind—or really, of viscera—that the drug culture and the war on drugs gifted to me. I feel that prescription Adderall, anti-depressants, and medical hash oil don't have the same sort of meaning. The sub-cultures of now are on Instagram, not hidden away in black-lit attics or coke houses. I think we're better at producing snitches than resisters these days.

So for obvious reasons, I wouldn't want to go right back to the 1970s drug culture, but I think kids never lack good reasons to mistrust or despise authority, and I'm sure the little rebels are cooking along somewhere. I hope they're cooking up something less self-destructive, though.