Exploring before the streets begin to swell with noise and putrefaction. 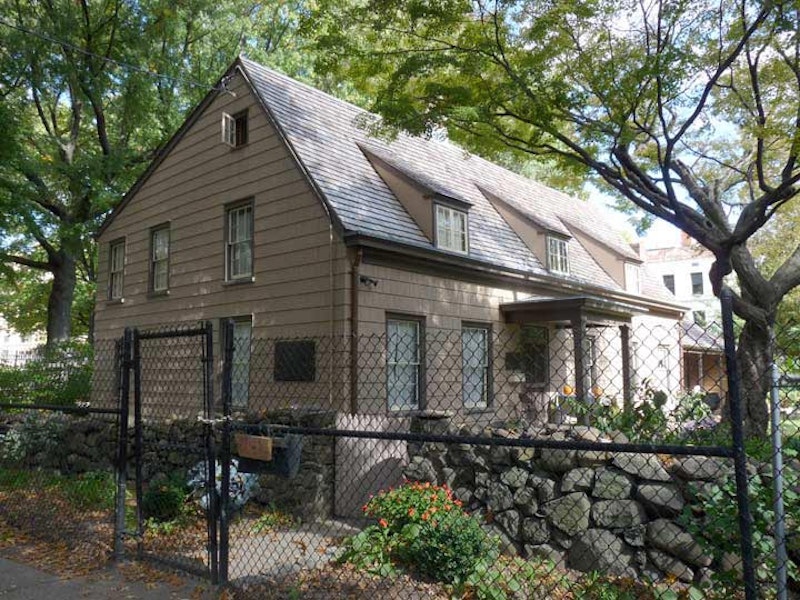 Downtown Flushing is noisy, overcrowded, and smells horrible during the warm months. That’s why I usually explore it between October and April. I visit some of Flushing’s labyrinthine jumble of streets—the neighborhood was first settled in the 1630s and many of the roads were built for horses and wagons, not automobiles—to see if there are any surprises there.

There are a few, but one of the things you discover when you revisit a neighborhood with a keener eye, are patterns and “designs” you may have missed, and details that escaped you years ago stand out, and you’ve no idea why you didn’t see them in the first place.

I was introduced to Flushing in 1969; I became a baseball fan that spring, at 11, and my team was the New York Mets, since Ron Swoboda had made an appearance at St. Anselm’s parish in Bay Ridge that preceding winter and I’d snagged his signature. It was quite a year to become a baseball fan, since in 1969 the Mets shocked the Cubs, Braves, Orioles and won the World Series. I thought they’d do that every year, but it’s happened just once since then. I made frequent appearances at Shea Stadium that year, taking a long ride from Bay Ridge on the RR train (trains had two letters then) and the 7. Now and then I’d look out over the center field fence at the Serval Zipper clock tower and Flushing beyond. The zipper tower, originally a furniture showroom building (see below) has outdated the zipper company and become a Flushing fixture.

The Dutch, led by New Netherland Governor William Kieft, took the region by force from the Indians and warred with them until the English arrived in 1645, on invitation from Kieft, who granted the English a 16,000-acre tract that included what’s now Flushing. The name is an English transliteration of the Dutch town of Vlissingen. Flushing, for most of its history, was Dutch-dominated only because Peter Stuyvesant, Kieft’s successor, was its governor during its early history. The Brits named the town in honor of Vlissingen because the town harbored English refugees before they sailed for America.

The Bowne House is here at Bowne St. and 37th Ave. as it has been since 1661 when built by British settler John Bowne. Stuyvesant, imposing a reign of terror against religious dissenters, had Bowne, a Quaker, arrested in 1662. Before the construction of the Friends Meetinghouse in 1699, at Northern Blvd. and Linden Pl., Bowne’s house was the primary site for Quaker services. Sentenced to pay a hefty fine, Bowne refused and was jailed; he was subsequently exiled to Holland.

While he was there, Stuyvesant’s bosses at the Dutch West India Company reversed Stuyvesant’s non-tolerant policy, claiming that the colony needed immigrants to ensure economic expansion, no matter what faith they were. Bowne returned home to Flushing in 1664; the British sailed into New Netherland five months later, and Stuyvesant surrendered without a shot fired. 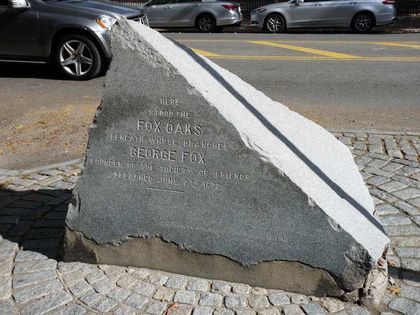 A roughly triangular monument, commemorating what were the Fox Oaks, stands at the curb in front of the Cambridge Court apartment building. A stone marker across Bowne St. from John’s house, worn into a rough pyramid by time, reads: “Here stood the Fox Oaks, beneath whose branches George Fox, founder of the Society of Friends, preached June 7, 1672.” Bowne St. is still crowned by oaks.

A meeting for Quakers and their supporters at John Bowne’s place attracted so many people that Fox decided to hold the meeting outdoors at a pair of oaks at what was going to be Bowne St. in a couple of centuries. The oaks remained in place until 1863 when they were knocked down by lightning. The Flushing Historical Society placed the marker in 1907; a much larger Quaker Meetinghouse, still standing on Northern Blvd., was opened in 1699. 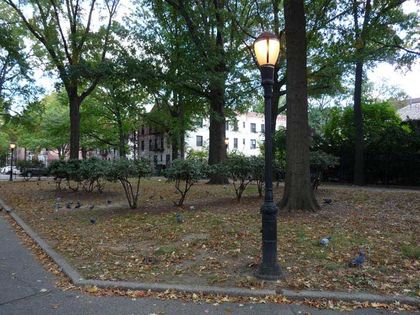 The first Flushing Freedom Trail, marked by a red line in the sidewalk and occasional small, red signs, was first proposed by Flushing High teacher and President of the Bowne House Historical Society Margaret Carman (1890-1976), a relative of Revolutionary War Captain “Lighthorse Harry” Lee and his son, Confederate General Robert E. Lee. Captain Lee described George Washington in an address to the Continental Congress in 1793: “First in war, first in peace and first in the hearts of his countrymen.”

Carman Green stands on historic territory. It borders both the Bowne House (the north side can be seen from the park) and also Kingsland Homestead, home to the Queens Historical Society but also a historic building in its own right, completed in Flushing in 1785. The green also stands on the site of Samuel Parsons’ plant nursery—Flushing’s history with the commercial plant industry began when William Prince established a commercial plant farm, or nursery, in western Flushing in 1737 along Flushing Bay. He first limited his business to apple, plum, pear and other fruit and flowering trees, and later expanded to shade and ornamental trees.

Other plant nurseries appeared in Flushing during the 1800s; one of the more successful was Samuel Parsons’, whose family gave Parsons Blvd. its name. Parsons brought the popular pink-flowered dogwood from Europe, as well as planted a weeping beech tree in 1847 on what’s now 37th Ave. that survived 150 years. Its descendants, grown from cuttings, are still there. 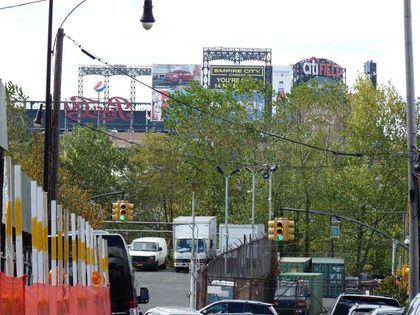 The Mets, who first played in 1962, winning just 40 games, have always been referred to as playing in Flushing, but Citi Field (and Shea) were west of the Flushing River, hence technically in Corona. Both parks were and are at the northern end of Flushing Meadows-Corona Park, but originally the Flushing Meadows spread out on either side of Flushing Creek, until it was industrialized and turned into a “river”—technically it’s a creek. 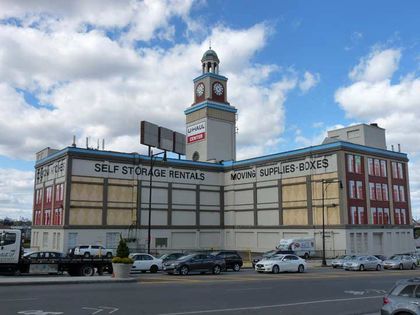 Generations of Queens residents recall the huge clock tower that could be seen over the left field fence at the old Shea Stadium, either sitting in the stands or from the behind-the-catcher camera angle that used to be seen much more frequently on game telecasts. During Shea’s time, this was the Serval Zipper Factory. In the early days at Shea, fans could see a neon sign on the building saying SERVAL ZIPPERS blink on and off.

The large building was constructed on what was then Lawrence St. (now College Point Blvd.) in the mid-1920s as offices and factory for the W. & J. Sloane Furniture Company, founded in 1843 by Scottish immigrants William and John Sloane, originally as rug and carpet importers. By the late-19th century, the company had begun producing original furniture and gained a reputation as producing some of the finest examples of Colonial Revival furniture in the country. In 1891, Sloane opened a flagship store on Ladies’ Mile in Manhattan, later moving to 5th Ave. and 38th St. Sloane was where the elite went for furnishings.

In the early- to mid-20th century, the firm branched into upscale interior decoration; the White House and Rhode Island mansion The Breakers were clients. Sloane furnished the interiors of World War II-era “liberty ships,” or massive cargo vessels. Unfortunately, as Sloane expanded into hundreds of retail outlets around the country, the quality of workmanship declined, the firm went out of fashion and went bankrupt in 1985. Long before that, however, Sloane moved from its Flushing factory and the space was filled by Serval Zipper for several decades. It’s presently a huge U-Haul distributorship. The clock tower has been retained, but the clock works apparently haven’t been maintained. 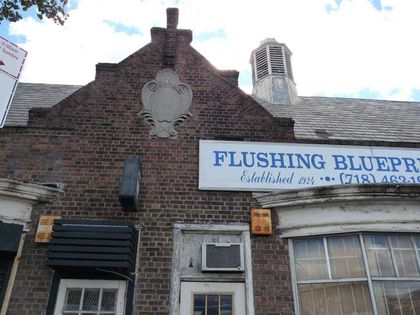 I’ve always been curious about this lengthy, rectangular-shaped building that takes up about the entire block between Northern Blvd., King Rd., Prince St. and 36th Ave., it’s made of brick and has Dutch-style stepped gables and a central bell tower (the bell is still in place).

The building, which is home to a bait and tackle shop and a church among other things, says “Peter Haff Huis” on the central entrance, “huis” being Dutch for home. I’d say this had been a restaurant or roadhouse along Northern Blvd. that would greet travelers after they had crossed the Flushing River Bridge, which has gone through much smaller iterations before the monster bridge of today. It was designed by Edward Shepherd Hewitt and is home to a row of mom and pop businesses. Peter Haff was an early Dutch settler who built his home in Flushing around 1643 to 1645.