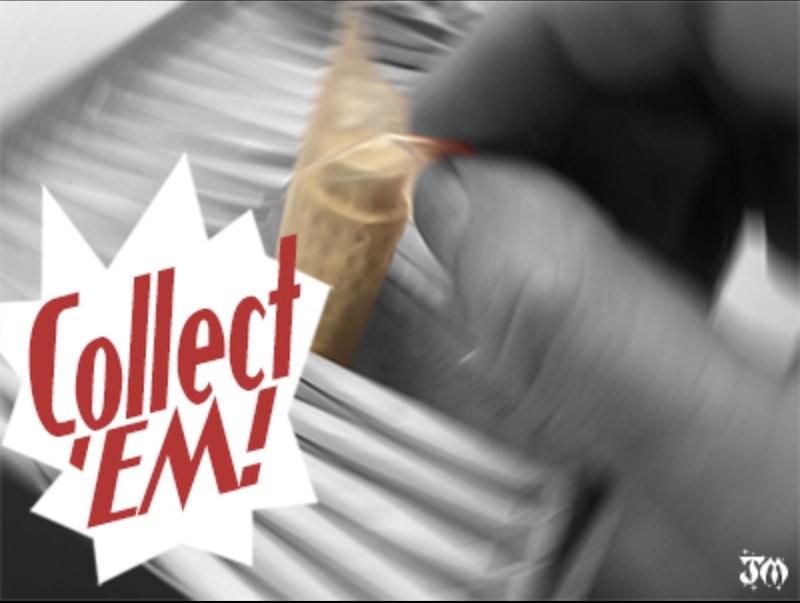 Doesn’t get more bestial than pawing some gewgaw from a specially-marked package of something else.

When cars grew 1950s fins and treasure was buried in boxes of cereal and soap flakes, I doubled-dipped. Unlike Jack Horner, I stuck in my whole mitt and good God, what plum prizes didn’t I pull out? Frogmen and nuclear submarines powered by baking powder. Decorator dishware. Plastic Triceratopses. Highball tumblers. Miniature Morse code clicker telegraph keys. Steak knives. Decoder rings. Facecloths, dishtowels and tiny ugly generic styrene automobiles. I had no sense that cereal premiums considerably predated my Boomer obsession, so it seemed part of a piece that our apartment building’s laundry room domestically mirrored our breakfast nook during that golden age of Free Inside.

Like a chump, I couldn’t believe my mom graciously granted permission to have at boxes of Duz detergent like a Forty-Niner at a Klondike sluice. After the first box, Klondike sluice might be too romantic a metaphor. Not clean dirty like honest Alaskan alluvial silt, or tactilely so-so like Sugar Corn Pops, no, this was up to my elbow in scented chemical grit. Yet doggedly I persisted, while my mom had better things to do, like read The New Yorker or smoke a Kool.

Looking back, I wonder what I was thinking. After some consideration, I’d posit most of us possess a cynical free lunch-denying secret Republican we choose to ignore for life. And most oddly of all, the core appeal isn’t the lunch, but the strange attractor of Free Inside.

Let’s be clear. I’m not talking promotional gimcracks simply handed-over at point of purchase. This is something often deeply-imbedded, sometimes cellophane-wrapped yet classically swimming in packaged product, a product pregnant with prize if you will. The mystery of it all! I wonder what prize sprung from what product first?

Cracker Jacks first sprung to mind. Wikipedia sez the popcorn candy brand introduced a “toy inside” in 1912. While premiums in the box have been discontinued, a legacy of inexplicable behavior remains. How many generations bottom-fished that sticky box thinking “This time will be different”?

After that I thought of English “Christmas crackers,” noise-making holiday novelties concealing trinkets, originally candy, introduced by Tom Smith & Company in 1847, also Wiki-sourced. Have you yanked apart a Christmas cracker lately? Against all possibility, their ephemeral contents are more insipid than Cracker Jacks toys, likely as that might sound as a temperature below absolute zero.

Something vestigial is in play. Between you, me and Jane Goodall, I suspect plenty was Free Inside plenty more well before cereal, detergent and candied snacks, well before Hector was a pup, I’d wager. The Turducken Imperative must go back to monkeys jabbing sticks into termite mounds for edible toys because, well, one need not be Albert Einstein to intuit that nothing’s cooler than a shot at a twofer… except perhaps a shit luck hat trick!

Turducken Imperative? I refer to stunt-stuffing a duck with a chicken and then stuffing that in a turkey. I enjoy all three but for years declined this trinity that left me stumped, until recently thinking about the abstraction of Free Inside.

Yes, all three parts are domestic fowl, not exactly different, but not identical cousins either. Yes, nothing about turducken is free, except for a dinner guest. But then, what Melmac dish, what decoder ring wasn’t factored into the cost of Blue Cheer or Spoon Size Shredded Wheat? Come on. Nobody’s kidding anybody about the “Free.” And the element of surprise is all but non-existent to boot. Whoever was shocked, shocked they told you, by the sheer nothingness of a Cracker Jacks toy?

What’s pivotal here is the Inside. By way of Turducken Imperative, something good isn’t only new and improved with something different inside, but better still if triple-stuffed with something else again. You might argue what’s inside what is key, but I smell paleolithic knee-jerk novelty response to anything inside anything else. It’s beguiling to the crocodile brain, Ideally the prize is unseen, but ships in tiny bottles and gnats in amber will do in a storm. Hair in lockets, now we’re talking. And that brings us to Wade porcelain figurines in Red Rose tea.

Not saying I curate a lot of these. I throw them out when I change my address. For that, they gradually re-accumulate on windowsills and desktops. Big deal, I drink Red Rose tea, once-famous for its Dixieland chimp band TV ads, okay? Red Rose is cheap enough and if the packages are specially-marked, and if I happen to find a miniature ceramic buffalo, Liberty Bell or choo-choo tucked between the tea bags, what’s a hominid to do?