Hurricane Preparedness: Why I Suck

There might be two or three flashlights in my house but I couldn’t tell you where they are. 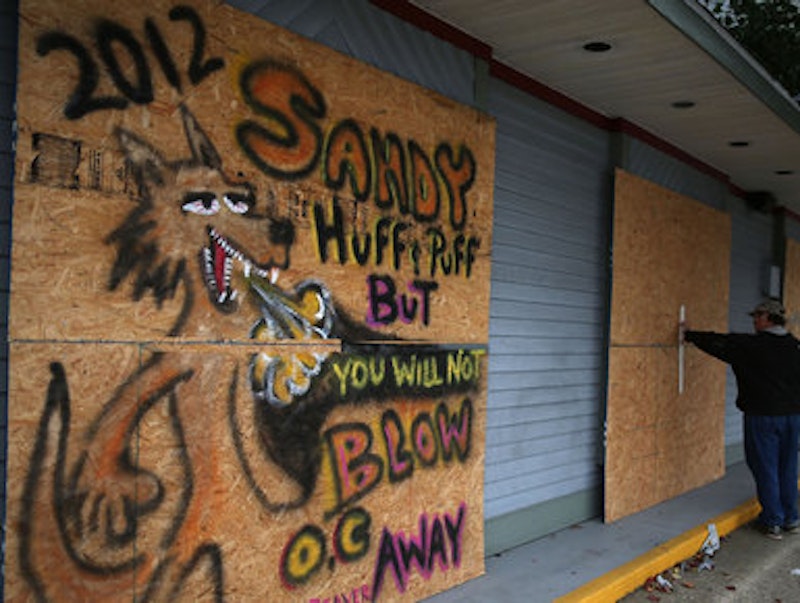 All week long I’ve listened to people talk about Hurricane Sandy with increasing alarm, near panic. I live in a waterfront Chesapeake Bay town and my writing cottage is 100 yards from the Chesapeake Bay on a small island. So I should be freaking out, but I’m not.

For the last three days, I have avoided Facebook and Twitter like the social plagues they are because my entire feeds are jam-packed with advice, warnings, radar pictures and even annoying hurricane party photos.

And the zom poc people? The people generally referred to as “preppers,” who have entire storage rooms full of stuff because either a.) they are extreme couponers and/or b.) they honestly believe that any second now some serious ass epic world-ending shit is going to go down (thus my nickname for them, the zom poc or zombie apocalypse people) and, when it does, they are going to have enough paper towels to clean up the half-eaten brains of the continental United States.

The zom poc prepper types are eating this hurricane hysteria up. They’re all smug and I told you so and we have enough military MREs for our entire subdivision to exist on for two years, bitches! So I don’t want to see Facebook and Twitter pictures of their neatly stocked basement Wal-Mart shelves. No social media for me until everyone calms down.

So, I suck at preparing for a hurricane because:

1.) I don’t believe there is anything we can do about a hurricane. God or Flying Spaghetti Monsters or fate whatever you believe in or don’t believe in is going to decide how this one goes down (my money is on Mother Nature), and if shit is going to get torn up, it is going to get torn up. No stopping it. I have encouraged my kids to avoid the room in the house that will be destroyed if the 130-year-old cherry tree comes down onto our Victorian house’s 130-year-old slate roof.

2.) I don’t stock anything. I’ve never had pantry shelving space and am the kind of person who is okay stopping at the grocery store to pick up a missing ingredient, or simply a rotisserie chicken and sides for dinner. I don’t cook, so I guess I don’t store food. I do have a camping stove, so if we lose power, I go into camping mode and we eat beans and franks.

3.) There might be two or three flashlights in my house but I couldn’t tell you where they are and they probably don’t have working batteries. On the bright side, I have tons of candles. Not because of hurricanes or pending doom, but because I like candles. I could light my entire house for days with candlelight. So that might come in handy.

4.) The last three times at the grocery store, I’ve been more worried about picking up full size candy bars for the trick or treaters than about milk or toilet paper. This is because an old (really mean, nasty woman) boss of mine once sneeringly called me a picnic blanket person. One day, she saw a blanket in the back of my car. She said “Oh, that’s good you keep a blanket in case of emergencies for if someone is in shock.” I stared at her, and then I said, “No, I keep a blanket because you never know when you’re going to want to have a picnic.” She sneered at me, rolled her eyes, and said “Oh, God, you are some kind of picnic blanket person.” She said this as if being a picnic blanket person was akin to being a kitten serial murderer. I thought to myself that I would rather be a picnic blanket person than a car accident victim person. My point is, I always give out full size candy bars to the trick or treaters and I want to be sure to have enough, so I’ve been more concerned about stocking up on candy than on milk that will go bad anyway when the power to the fridge shuts down.

If Halloween is canceled because the hurricane ended the world? At least I will have a zom poc level horde of Reese’s Peanut Butter cups I can eat by candlelight.