The Weird Boyfriend and the Girl Who Didn't Speak Up

I would have said it was rape, but what do I know? 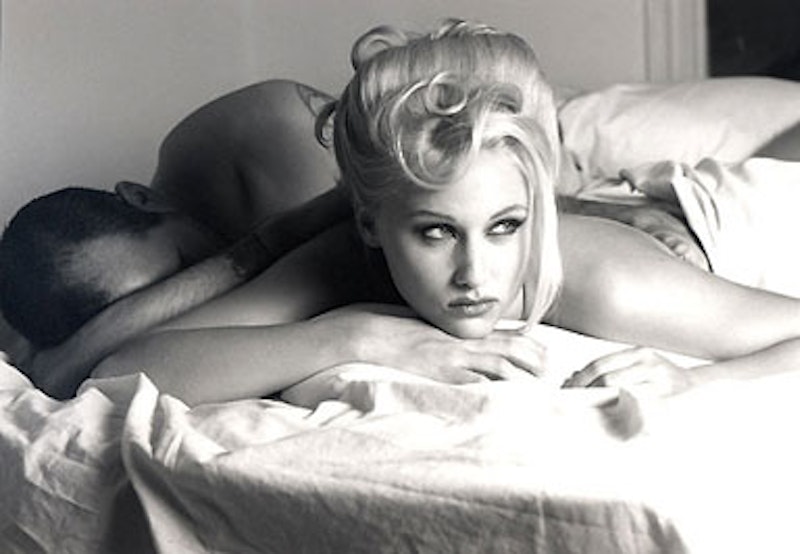 Years ago I knew a difficult woman. Childish, stubborn, whiney, manipulative. All right, she was my girlfriend. We lasted four months, and mainly it was a bad time.

When it was over I didn't know what hit me.

She had an ex-fiancée of five years or so. They had just broken up. Before him there had been a husband; the marriage lasted a year, maybe 10 months. She had loud fights on the phone with her mother. She also had an ex-boyfriend, a very recent one. We never met, but he sounded awful in his way.

The boyfriend was large and burly, with a gym body and heavy glasses, and he had just got a doctorate in something impenetrable, let's say astrophysics. Tracy-Anne, as I'll call her, said that one weekend he sat her down on the sofa and wanted to go through his whole dissertation with her, page by page. Her background was, let's say, geology and she had no idea what he was talking about, but she was stuck there. Finally she broke free, which she did by making a scene. “I looked at him and I said”—and so on.

“He was just weird,” she said bitterly. One time, after they broke up, he was back in town and called her apartment. The roommate answered and took a message, one that caused the roommate and Tracy-Anne to do some eye rolling. It was this: “Hi, yeah, I went out with Tracy-Anne. I don't know if she remembers me.” The roommate reported that he followed this with a nervous little laugh. Poor bastard.

Also, he had a small penis. He used to say “They make these things so big” when fumbling with a condom.

But what she held against him was the weirdness. She meant that he had to put up a facade and that he was never sure he was doing it right. Anyway, that's how I read her comments after due reflection. It was like he was never really there because he didn't trust her. Looking back, of course, I can't say I blame him. But that was the situation.

Tracy-Anne considered herself the opposite of her failed boyfriend: outspoken, what you see is what you get. She pointed to a passage in a novel she was trying to read. The hero kept making enemies because he couldn't help shooting down liberal pieties; Tracy-Anne figured she was like that. Not conservative, because she wasn't; she missed her progressive little college in the Midwest, a sheltered spot where nobody said a bigoted word. But like the man in the novel, she was going to speak her mind. For him this meant voicing wintry observations about left-wing fatuity and the West's decline. (The book was The Dean's December, and Tracy-Anne never finished it.) For Tracy-Anne it meant saying she was offended. She did this happily and with a sense of occasion: “I'm offended.”

She was conventional, and the conventions she accepted all came from the standard-issue college left. She was a woman (or girl, since she wasn't 30 yet and her emotional development was low), so she was a feminist, a very conventional one. The only time I have ever heard anyone actually say the words “the personal is political,” it was Tracy-Anne. The only time I have heard someone describe checking out her vagina in a mirror, so as to learn and grow, it was Tracy-Anne.  She'd read about the practice in Our Bodies, Ourselves, and for her it was a milestone.

Here's something bizarre. Tracy-Anne’s complaints about the ex-boyfriend included this: One time she told him she had a fantasy of a man just grabbing her, throwing her on the bed and fucking her without a word. So he did this. Every time they came to her apartment or his, and no roommates were around, he would do the wordless grabbing, throwing and fucking. It really got on her nerves. She didn't enjoy it. He wasn't much in bed, and at any rate who wants to go through repeated grabbing and throwing just because she said she had a fantasy? When they finally broke up, these episodes were among the things that she missed least.

Soon enough Tracy-Anne and I broke up too, for reasons indicated in the first paragraph. A long time has passed, and I've thought about her now and then. For example, I've wondered why this feminist and avowed loudmouth didn't say anything when a man was hustling her off to bed against her will. It's not like she was afraid of him; he heard plenty from her on other subjects. And he wasn't driven crazy by lust; he was just trying his best to live up to what he thought she wanted. Maybe she liked the sex better than she said, but she wouldn't have pretended for my sake. I heard an appraisal of her ex-fiancé’s performance that was a good deal more favorable.

Unwelcome sex being forced upon her. A number of people would say that was rape. She might have said that herself if she had heard the story about someone else. But Tracy-Anne put up with it. All that noise, and then she didn't speak up when being tossed into bed. Not only that, but she didn't seem to think that speaking up was in order. It beats the hell out of me.

A fellow, out of sheer willingness to please, commits a series of pseudo-rapes that (I think) possibly amount to actual rapes because of the girl's unwillingness. The girl, who spends much of her time making noise about her feistiness and feminist beliefs, puts up with it rather than ask him to lay off. I still haven't figured it out. My only explanation is that people are full of shit and that being full of shit can put you in ridiculous circumstances.