When the Ants Come Marching In

These ants were going to feel some pain. 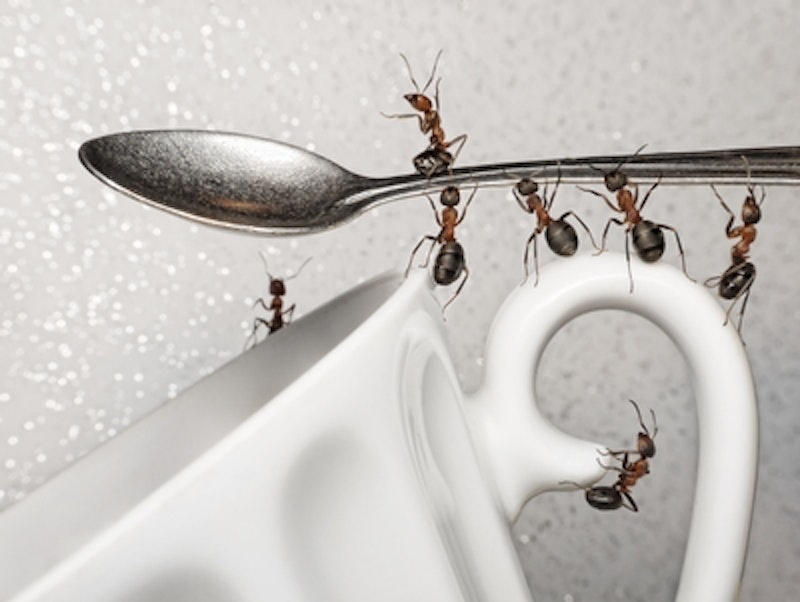 There’s an ant problem in my kitchen. I have two three-year-old boys and most of my day is spent trying to prevent them, with varying levels of success, from ripping the house down to the studs. As such, I don’t clean the place as much as I should. The result of this minor lack of cleanliness was pointed out two days ago when my wife said, “We have ants in our kitchen.” And sure enough, there they were. Not many at first glance, but a closer inspection revealed lines of them heading from the corner boards along the floor to the back door and back again, probably high-fiving each other as they went. My sons even found some on their toddler-sized table nearby.

Because I’m not the bug murderer my wife is, I tried picking them up between thumb and forefinger and tossing them out the back door into the grass. This went on for several days and as you might suspect it worked. Problem solved. At least temporarily. It was like the ants would see me pick up one of their friends, and just accept it as the cost of doing business. “They got Harold!” they’d yell as they keep moving along in lines, their high-fiving not slowing down a bit. Some ant with a clipboard would cross Harold off the list and everything would continue on as before.

Eventually it dawned on me that my plan wasn’t working. During the 10 seconds it would take me to grab an ant and toss its butt out the door, nine more would walk through, all thanking me for holding the door for them.

With some prodding from my wife I went straight to Ant Annihilation, Phase 1: Ant Traps. Trudging to the Rite Aid, I tried to justify the impending murder. The ants had pushed me into it. I’d tried to reason with them. I’d tried to pick their tiny bodies up and place them gently back in their grassy home where they belong. After getting home, I pulled the box of ant traps out of the bag. I had deliberately selected the less lethal looking traps at the store. No need to go nuclear on these little bastards, I thought. Just do this and get it over with. Now, looking at the box, apparently I had miscalculated. These ants were going to feel some pain. The brilliance of these ant traps was that not only would these ants die, but after becoming infected they would carry the poison back to their little ant friends and infect them too.

I put the ant traps out on the floor by the back door and waited. And waited. Nothing. The ants came and went from the traps, experiencing no symptoms whatsoever. I think one of them broke a sweat, but was immediately toweled off by another ant. So the ant traps are a failure. Instead of poisoning the ants, I’ve given them a better reason to stay in my kitchen than had previously existed. It’s like I wanted the squatters out of my rundown house so I could knock it down and redevelop the property, so to remove them, I hooked up electricity, wired up the cable, and ordered pizza to be delivered every single night.

I was watching the presidential debate the other night and it hit me: my new plan is so simple I don’t know how I missed it, but I did. When you have a population of unwanted aliens living in your country or your house or whatever, how do you get rid of them? You can’t hunt them down. There are too many of them and the other people already in the house will likely be angry with you for being a dick. You can’t pass laws to evict them because they already don’t follow the laws. Also you can’t kill them with ant traps. That doesn’t work.

The solution is easy: self-deportation! I’ll just make things in the house undesirable for the ants while at the same time making the back yard into Ant Heaven. I imagined a steady stream of ants headed out the door. I went to the hardware store and bought a whole bunch of sand and six ultra expensive high-output outdoor heaters. Then I went to the grocery store and bought about $200 worth of cheap unfrozen popsicles. I dumped the sand all over the back yard, emptied what must have been 1000 popsicles out on the sand, hooked up all the heaters, and pointed them at the sand/popsicle mix. And wouldn’t you know it, within hours there must have been a billion ants out there!