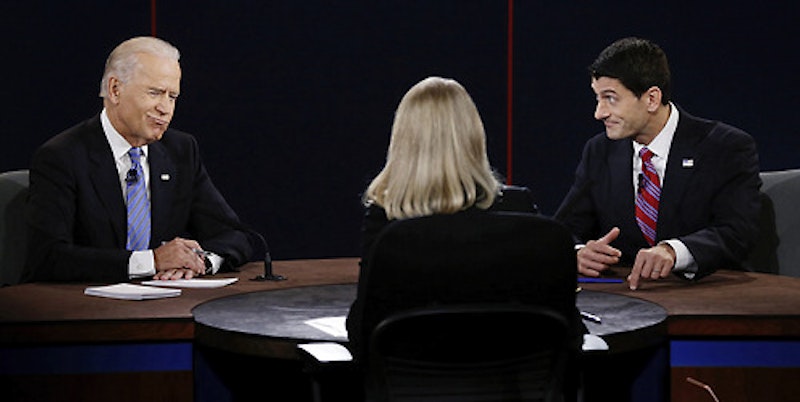 If you want to see the scope of the disconnect between our literary intellectuals and the wider reading public, look no further than the Nov. 8 issue of The New York Review of Books. The cover advertises a "Special Election Issue," with a solemn John Springs caricature of Barack Obama—solid blue suit, face made with red and black cross-hatching, eyes shut tight as if in pain or perhaps in prayer.

Inside, readers find a symposium in four parts that add up to a baker's dozen election essays from the usual suspects. Most of the entries, from such intellectually diverse voices as Michael Tomasky, Russell Baker and Elizabeth Drew, are interchangeable. Members of the NYRB set want us to know they hate Mitt Romney and the Tea Party; and love Barack Obama; and wish he would really take it to the Republicans much harder.

It's all very depressing. We've come to expect low watt, high carb prose like this from Frank Rich:

Romney is so distrusted and disdained by the mainstream of his radical right-wing party that in the event he inters the White House, he will serve as a pliant errand boy for the elements in the base he tried and failed to placate throughout the campaign.

And, sure, we should expect warnings that we'll return to the Dark Ages under Republican rule, overlooking the many expansions and abuses of executive power that have occurred under this Democratic president. David Cole duly warns us:

A Romney administration would risk a return to the immoral, illegal and counterproductive policies of George W. Bush.

And Ronald Dworkin predictably joins in with the Armageddon alarums:

The election of Mitt Romney and a Republican Congress could well be a catastrophe for both economic stability and social justice.

Also, it is apparently necessary for proper moral hygiene for NYRBers to go on a bit about the Tea Party. Cue Russell Baker:

Having purged their ranks of liberals, moderates and many ancient and honorable conservatives whose service antedated the Reagan era, Republicans have whittled themselves down to a reactionary party angry at the modern age, fearful of the future and terrorized by the radical Tea Party.

And what symposium would be complete without Garry Wills heaping coals on the fires of race hatred? He concocts a literary Mystery Box for Romney and explains:

Under all the other hidden things, the Mystery Box is hiding a lethal level of radioactive racism.

All of this is more or less expected from The New York Review of Books. But I found David Bromwich summed up the most disappointing thought in a single sentence. "Romney deserves to lose," Bromwich writes, "because his personality has revealed so unreliable a surface that no exertion of normal ingenuity can guess what lies underneath."

That excuse is deadly to the critical imagination. Indeed, incuriosity seems has settled like fairy dust over all of the contributors to this symposium. Not one NYRBer makes the token effort to understand Romney, much less defend him. Instead, they denounce Romney for his many grievous Republican faults and occupy themselves with defending Obama and explaining away his minor sins. Elizabeth Drew allows that Obama "at times, his rookiness showed," but enthuses:

A reelection—a confirmation by the country and a continuing economic recovery—would provide him with a changed landscape, and opportunities to extend his reach.

There are many serious readers who do not want Obama to extend his reach. Some of them are even voting for Mitt Romney. With this symposium, The New York Review of Books is saying, "Your point of view is not welcome here, even at a 12-to-1 advantage." That's bad for business, and worse for literature.