The story of a handful of cops taking on the NYPD. 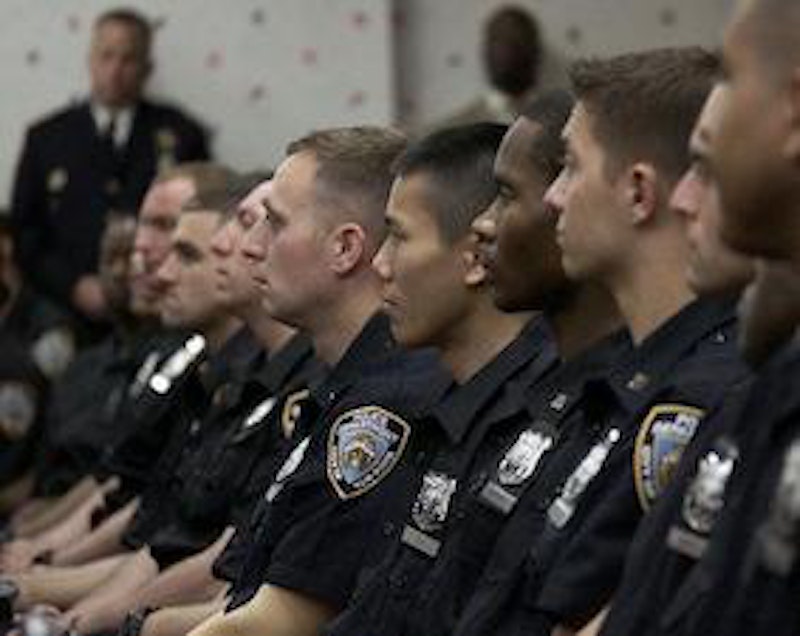 Crime + Punishment opens with a 2014 telephone conversation between New York City cop Sandy Gonzalez, a 12-year NYPD veteran, and filmmaker Stephen Maing, with the camera lingering over a shot of the lower Manhattan skyline. Gonzalez is telling Maing how his commanding officer’s telling him he has to bring his arrest numbers and summonses way up, and he wants to investigate who made that decision. Gonzalez is well aware of the bad things that can happen when the end of the month’s nearing and a cop needs an arrest—any arrest—to please his bosses.

Then Maing cuts to the NYPD graduation ceremony, where police commissioner Bill Bratton’s addressing freshly-minted cops, bragging about reclaiming the streets, after the devastation of the 1980s and 90s, with his “broken windows” policy that focused on petty crimes in minority neighborhoods. He tells his audience their job will be to “save the children.” Confetti rains down from the roof. The hope is palpable, but keep watching and you quickly see that, below the surface, things aren’t looking great at the NYPD.

Crime + Punishment tells the story of the “NYPD 12,” a renegade group of whistleblowing minority cops who didn’t join the police force so they could then be used to prey on their own in their old neighborhoods just because the higher-ups told them they needed to hit some number every month, and that they should do this by focusing on black males between the ages of 14 and 21. New York State banned all police quotas in 2010, but every NYPD 12 member recorded their supervisor telling them, in so many words, that quotas were still in effect. Bratton’s shown on camera saying it’s “bullshit” when a reporter asks about the existence of quotas, but this film provides plenty of hard evidence to the contrary.

Maing’s camera takes us all over the city with his aerial views, and then brings it down to the streets to reveal the details. Over a snowy street scene in the South Bronx, the filmmaker plays a hidden recording of a lieutenant telling Gonzalez that his “activity” is too low and that he must catch up with the others. “How can you not see something?” asks the lieutenant. “As soon as you get in your car and drive away, before you get to the corner, there's at least one person who did one thing in front of you.”

On the streets in other neighborhoods, young men speak on camera about the times they’ve been falsely arrested, only to have the cases thrown out for lack of evidence. A private investigator who works to fight police quotas explains on camera that the point of this harassment is to eventually get a judge to look at all the arrests, even though they were tossed, and finally decide that the ninth or 10th must be legit. One of these young men is a teenager who was held at Rikers Island prison—the so-called “Bronx gulag”—where he refused to plead guilty to something he didn’t do. In one of the film’s most powerful moments, he’s shown in court learning that the charges will be thrown out.

NYPD officers refusing to meet their de facto quotas routinely faced retaliation. They were taken out of their cars and put on the street. They lost overtime and received low evaluations. Maing shows police officers pulling up on Sandy Gonzalez at a quiet street corner where he’s been told to stand all day. They write him up on a winter day for wearing his police-issued hat when it’s not below 32 degrees, per NYPD regulations. Then, after the NYPD 12 filed a class action suit against the NYPD and did a TV interview to air their complaints, the retaliation got ramped up even more.

Maing dresses his film up with some cinematic touches that distinguish it from an average just-the-facts documentary. When the NYPD 12 are walking to the NBC studios for their interview, he films them in slow motion as they swagger and smile confidently at each other. It’s like the truth posse’s just arrived in town and it’s heading to take down the corrupt establishment. The filmmaker closes out his work with a stylish, noirish touch, using a jazz score while slowly panning an aerial camera over nighttime New York scenes of police cars flashing their lights and sirens blaring.

Crime +Punishment’s a well-crafted exposé of a powerful institution subject to little oversight that employs 34,000 police officers. You’ll often hear from conservatives that systemic racism’s been eradicated, but you can’t believe that after watching this film. The lawsuit’s still tied up by the NYPD, but Police Commissioner James O'Neill has announced that every uniformed member of the department is now expected to undergo anti-quota training. That’s mostly to the credit of the NYPD 12, who put their careers on the line to do the right thing.