How to Speak to a Scientologist

If you really have to. 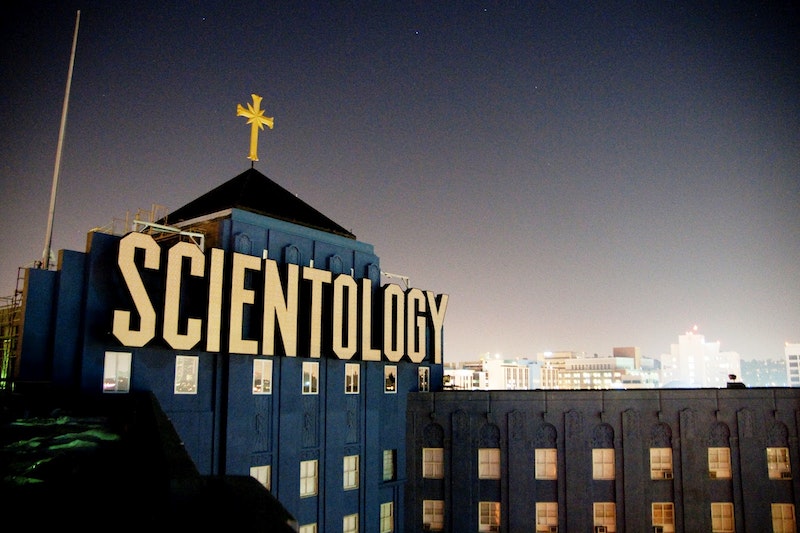 I mean, why would you want to? But if you do, if you have to… Say you find yourself doing one of those Stress Tests or Personality Tests or a Free Career Analysis or whatever the hell they now call them these days. Don’t under any circumstances give them your real address, phone number or email. You’ll get stuff from them for years. They’ll never take you off their mailing list.

There’s a policy written by Hubbard about the gross income being in direct ratio to the output of promotional material and keeping their stats up is very important. So lie about your personal contact info. Trust me on this. Another thing: if you’re approached by a Scientologist and want to avoid a conversation, here’s a tip. Don't get caught flat-footed. Make eye contact, start moving, don't blink or apologize. Tell them that you can’t talk right now, and say you’re working hard to pay for your next level. Tell them that you’re on lines at CC or ASHO. If asked what your last level was, tell them Grade 3 or Zero or The Way to Happiness or your last action was the Purification Rundown. Just don’t break your stride. And keep your damned TR's in.

Remember, you’re working hard to earn some money to pay for your next level and can’t dawdle. Emphasize that. If they persist, say you’re moving up the BRIDGE and this is DEV-T! (Developed unnecessary traffic). And for god's sake, keep your TR’s in! (Training regimens). And give them a firm ACK! Not some in invitation to continue, okay?

Not that you want a firm end of conversation ACK.

Just don’t do it. Don’t bother.

But, if you must… say, for instance, you’re working with one. Say a good friend or family member winds up being one or you find yourself in some work scenario and interactions can’t be avoided. If talking to a Scientologist can't be avoided, here’s a tip. They have a name for it too, good roads and fair weather. That’s what they call the type of communication that can be had with a WOG, that's you, if they want to keep the lines of communication open and avoid any sticky areas. These conversations are generally safe, and non-antagonistic.

How about them Dodgers? You get good mileage on that Prius? Warm enough for you?

This is the stuff of good roads and fair weather. So, now you can do the same thing right back at ‘em to allow the time to pass safely and not ruffle feathers. If you were to say something like, “How about Tom Cruise going nuts on that YouTube thing?” or “Is it true about Hubbard saying, 'If you want to make a million dollars, just start your own religion'?” or “Explain to me while keeping a straight face the Xenu story.”

This would not be good roads and fair weather chit-chat. This is the stuff that might be taken as antagonistic and threatening and could lead to you being labeled an SP, a suppressive person, and disconnection would follow.

I ran into an old Scientologist friend that I hadn’t seen in years and we were both happy to see each other, until I made it obvious where I now stood by saying something like, “I’m not into the cult any longer.” And in mid-sentence, my old pal spun around on her heels and quickly walked away. So, if you want to participate in the life of a friend or family member who are in the cult, if you want to enjoy the business you share with them, if you like where you’re living and don’t want to move, keep it light. Otherwise there’s a distinct possibility that in their world you won’t exist. You’ll be dead to them and neither of you want that.

On the path of good roads and fair weather, you just don’t talk about it. You get it?