Looking for the Sacred

Photographing the Temple of Debod and Almudena Cathedral. 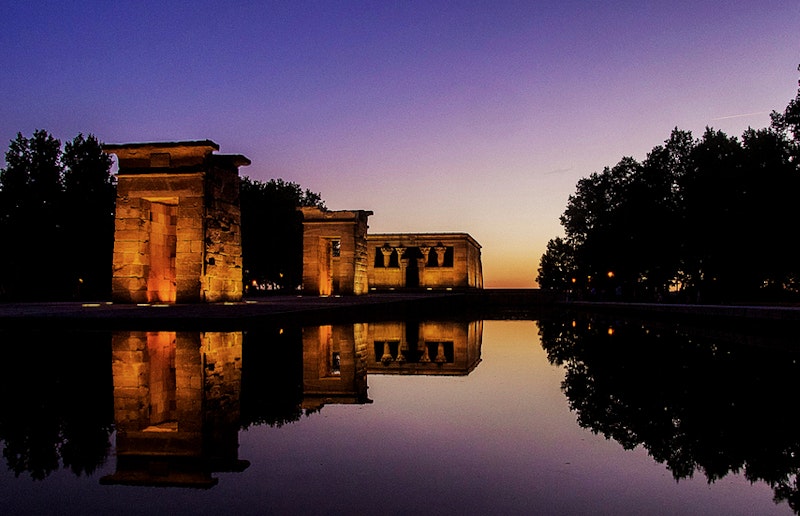 The public parks in Madrid all resemble La Grande Jatte but with more unemployment. Men strum guitars in circles, women crane their necks at impossibly elegant angles. The noon sunlight strikes beer bottles which become the glints in glassy eyes. Those eyes have never known what time it is or will be. I've never been good with parks or recreation or anything that falls under the leisure umbrella. My place is in solitude. I had heard about an unusual landmark in town called the Temple of Debod. I don't consider myself an archaeologist, rather a lover of spectacles. It is a practical spectacle conveniently near a cathedral that I must photograph. By association it is divinely inspired, thus all the more unavoidable. I say goodbye to no one at the park and start walking for miles to the west side of town.

It's sixty degrees out and since I am never without a jacket below seventy I sweat. A tertiary effect of the sun, other than being a source of heatstroke and necessary D vitamins, is that it often jogs the memory. In my vision I remember a purple down jacket on a child. That child existed twenty years ago in a different country, yet sweaty under the same sun. The child is no longer myself because someone else has taken his place. That someone else had glimpsed the future in a suburb while they waited for the snow to melt and the bus to arrive. In my present reality I arrive at most places on foot, as I do, drenched in sweat—I'm at the Temple of Debod. It's a public space of concrete and water brimming with tourists in languid poses. Camera breaks are breaks for obscene kisses.

Because it is a gift from the Egyptian government, men with guns guard it. There is constant surveillance from the far end of an artificial moat. This seems to have no observable effect on the public behavior of the space. All who step before the temple gates are too steeped in amor to harbor the impotent rate that leads to vandalism and crime. The only curiosity I saw was the police element itself, protecting an incongruous immigrant object. I photographed the monument through the water so that I can remember it backwards.

There is still the matter of getting what I came for. I am not a pious man, though I believe in the visual power of Jesus on the cross. It invokes the right admixture of fear and spectacle that has damned as many people as it has saved. I did not come to Almudena Cathedral to capture this image. It is superfluous to the rich history of photography. The majesty for me lays in the stained glasswork and painstakingly carved support columns that form the windows and bars of his eternal prison. The light at 3pm is almost ideal so I must wait. I have never kneeled before a bench to worship an idea, but I have kneeled many times with a tripod in anticipation of a unique moment of light. The anticipation that day lasts for 30 minutes until the right moment arrives in which all traces of white shoes and semi-flared pants are absent from the composition. This photo I immediately christen “Dutch Tourist Invades Perfectly Composed Frame.” This may very well have been the only moment I distilled from the grounds were it not for a late observation. Packing away my equipment from floor level I glimpsed a television screen in a corner visible from the altar. A Mobius band emerged from which the dead icon viewed the replay of his Passion.