Home is Where the Hearth Is

The relevancy of Frank Lloyd Wright in the COVID era. 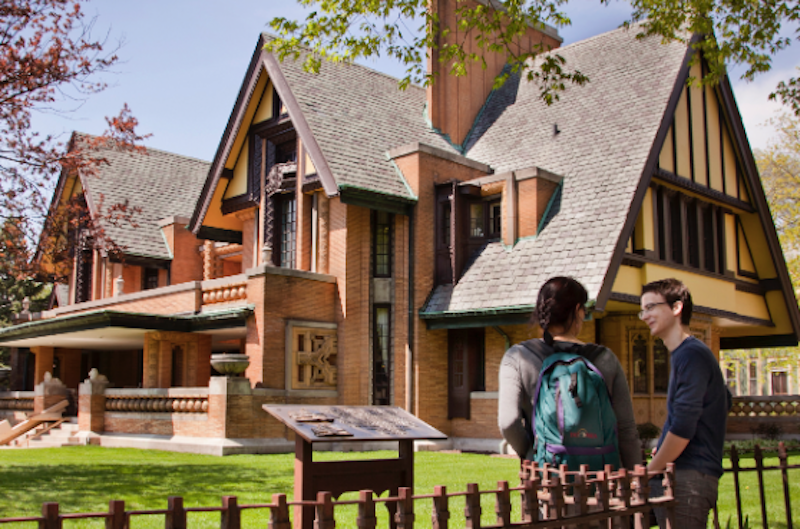 Strolling down the streets of Oak Park, extravagant Frank Lloyd Wright homes decorate the village where America’s most iconic architect lived and worked for two decades. Each home’s inimitable disposition reflects the architect’s belief that a home should mirror the lifestyle of its owner.

"There should be as many kinds of houses as there are kinds of people and as many differentiations as there are different individuals. A man who has individuality (and what man lacks it?) has a right to its expression in his own environment."

Wright introduced the Prairie-style home, a revolutionary step away from the traditional colonial revivalist-style buildings: open internal spaces, expansive ground floors, organic structures symbiotic with its natural surroundings, windows he called “light screens” located typically several feet off the ground, and compact, protective walls that serve as barriers to the outside world.

Americans prioritize these features—safety, nature, open spaces, natural light, beauty—in their homes. In today’s coronavirus era, Americans prioritize these aspects of home living in their daily lives as well. Americans want to feel safe. They are traveling to national parks. They are working from home and they are moving to the suburbs. While they may be going to national parks, spending more time outside and with their families, they are seeking homes that reflect these activities, and to Wright, a home should mirror a person’s daily life.

"Any house is a far too complicated, clumsy, fussy, mechanical counterfeit of the human body. Electric wiring for nervous system, plumbing for bowels, heating system and fireplaces for arteries and heart, and windows for eyes, nose, and lungs generally."

Wright loathed cities. After graduating from the University of Wisconsin with a degree in civil engineering, he built his houses after Chicagoans fled the city for the suburbs after the Great Chicago Fire—a parallel to today’s urban flight to the suburbs. According to Robert Frick, corporate economist at Navy Federal Credit Union in Vienna, Virginia, home building is making a comeback in coronavirus times. Home building increased 17.3 percent in June, with the South and West accounting for 75 percent builds. Builders reported demand for single-family homes in low-density markets, including rural markets and large metropolitan suburbs. “The housing market continues to be a bright spot for the economy, supported by increased buyer interest in the suburbs, exurbs and small towns,” said National Association of Home Builders’ Chief Economist Robert Dietz.

Critics called Wright political. He advocated for democracy—evident in his architecture (flat roofs, open spaces, horizontal lines)—and was criticized for using Japanese elements during World War II. He visited the Soviet Union with his third wife, Olgivanna, who owned Marx’s Capital. Although Wright said “Karl Marx never appealed to me” and wrote “Democracy is far stronger than Fascism or Communism or any other ism if allowed to work, ”Sen. Joseph McCarthy called him a Communist."

He feared democracy would turn into a mobocracy. “To say the house planted by myself on the good earth of the Chicago prairie as early as 1900, or earlier, was the first truly democratic expression of our democracy in Architecture would start a controversy with professional addicts who believe Architecture has no political (therefore no social) significance. So, let’s say that the spirit of democracy—freedom of the individual as an individual—took hold of the house as it then was, took off the attic and the porch, pulled out the basement, and made single spacious, harmonious unity of living room, dining room and kitchen, with appropriate entry convenience.”

He read Buddha, which influenced his idea of organic homes. He incorporated elements of Melville’s literature—specifically “I and My Chimney”—which prioritized domestic life. Wright valued functionality, aesthetics and communal living spaces—revolutionary ideas at the time compared to the stuffy colonial revivalist homes.

He believed the houses we live in shape who we become. His Oak Park studio and home has space to reflect before opening the door (a Japanese influence taken from Shintoism); no doors separating the foyer from the living room where a hearth is in the center to gather; and clever ways to make more space. Above the hearth is a mirror that looks like a window, and the back of the baby grand piano upstairs hangs above the stairwell (its keys on the other side of the wall). The dining room table chairs tilt forward to emphasize conversation, important in an age of isolation and relevant to the millions of young adults aged 18 to 29 who moved in with their parents (and the highest demographic to move). The coronavirus outbreak has pushed millions of Americans to relocate from their college dorms, unsafe communitiesor housing they could no longer afford to less densely populated areas. About one-in-five American adults moved residences or know someone who did, according to a Pew Research Center study. About 61 percent of those adults said they relocated to a family member’s home.

Wright viewed nature, natural light and beauty essential to human living. He incorporated these elements in his homes. To Wright, a home should reflect how a person lives and what he or she prioritizes in life. While each home differed, these tenets remained a consistent theme in the thousands of homes he built (with the highest concentration in Oak Park). He said that the greatest architects can predict how home living will change in 10 years, but he predicted how the world would change one century later, making him America’s most iconic architect.