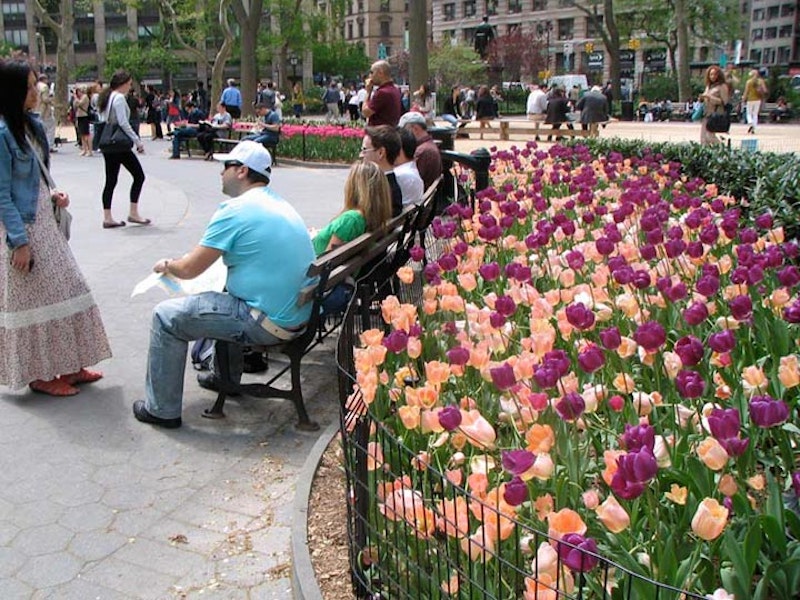 Since I’m the biggest square in town, I thought it’d be appropriate to write about the five major squares in Manhattan south of Central Park: Madison, Union, Stuyvesant, Tompkins, and Washington. Zigzagging around town likes this provides plenty of exercise, and tangibly adds steps and miles traveled on my iPhone pedometer app, which has become the scoreboard by which I measure fitness.

Like Washington Square, Madison Square was once a potter’s field and a military march drilling field on the edge of town. In the early-1800s, there were roadhouses and armories in the general region where Bloomingdale Rd. continued a northwest run on Manhattan Island at 5th Ave., which reached this far north in the 1820s, and the vanished Eastern Post Rd. ran northeast. The post road was closed in 1844 and the new Madison Square opened as a public park three years later.

Madison Square developed quickly as a prime residential era, and the Fifth Avenue Hotel and the original Madison Square Garden (originally an 1870s railroad passenger depot leased to PT Barnum that first gained its name in 1879; the second on the site was built by famed architect Stanford White, who was shot dead on the Garden’s rooftop by jealous husband Harry Thaw) surrounding it. The arm and torch of the Statue of Liberty were exhibited in the park (1876-1882) prior to its 1886 installation on Bedloe’s Island, and the first electric street lighting in NYC was illuminated here (1880). A graveyard of one, the repose of Mexican-American General William Jenkins Worth, is located in the triangle formed by Broadway, 5th Ave. and W. 25th St., flanking the park.

Madison Square was also the site of the city’s first experimentation with lawn chairs (1901; a failure); the site of the first public Christmas tree (1912), a tradition under fire by cultural exclusionists in recent years. In the 20th century tall office towers began ringing the park, most notably the Metropolitan Life Insurance Building and Fuller (Flatiron) Building, and in 2009, the 60-story One Madison Park residential tower (by Rem Koolhaas). 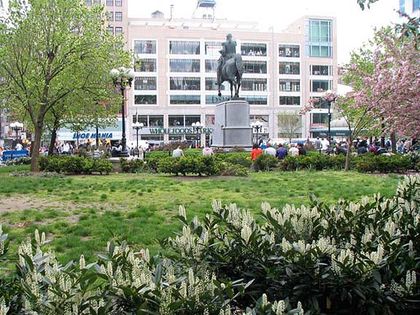 Union Square was named (actually as Union Place) in 1815 at the near-junction of the Bloomingdale Rd., or Post Rd. to Albany, and the northern part of the Bowery Rd., the Post Rd. to Boston. In the original Commissioners’ Plan drawn up 1807-1811 by surveyor John Randel, Broadway was originally going to run “north” above 10th St. and end at a 239-acre military training ground called The Parade spanning between 3rd to 7th Aves. and from 23rd to 34th Sts. By 1814, however, the idea for The Parade had been scrapped as the new 3rd Ave. diminished the Post Rd.’s importance, and emphasis was then placed on Broadway as a main north-south route up Manhattan Island. To do that, it took a northwest angle.

Union Place, the meeting of the Bloomingdale and Bowery Rds., was so named by 1815, but served time as a potter’s field and a place for squatters until the park’s present configuration west of 4th Ave. (Union Square East), Union Square West (Broadway), E. 14th St. and E. 17th was finally laid out and landscaped as the modern street grid had reached that far uptown by then. After a short stint as Union Park, the name Union Square was settled on by the 1870s. The square is named for the junction of roads, not the Union (USA, vs. the Confederacy) or later gatherings by trade unions that took place there.

As with Madison Square, Bryant Park and many other of NYC’s large public squares, law enforcement and local community boards had given up trying to control crime and drug dealing beginning in the 1960s. A renewed quality-of-life push by Mayor Rudolph Giuliani and NYPD Commissioner William Bratton reclaimed parks as public spaces beginning in 1994, and recently, they’ve been NYC’s safest areas, at least until the COVID crisis began. 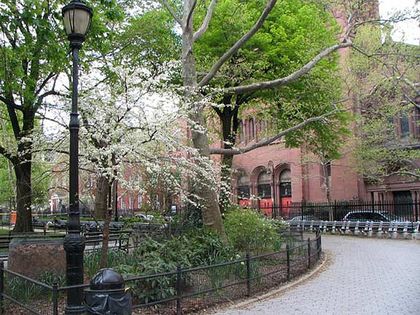 Stuyvesant Square is bisected by 2nd Ave (though Robert Moses was thwarted on his plan to connect 5th Ave. and W. Broadway through Washington Square in the 1950s). It’s on both sides of the avenue between E. 15th and 17th Sts.

It’s most New Yorkers’ assumption that Stuyvesant Square was named for the imperious 17th-Century Director General of New Netherland, Peter Stuyvesant, especially since Gertrude Vanderbilt Whitney’s 1941 bronze of Peg Leg Pete is the centerpiece of the park’s western section. However, in 1836, a descendant, Peter Gerard Stuyvesant, the co-founder of the New York Historical Society, and his wife, Ann Rutherford, decided to “donate” the space, selling it to NYC for $5. The square wasn’t to open to the public until 1850—in fact, it took a lawsuit by P.G. Stuyvesant to get the city to stop dragging its feet on development. Stuyvesant Square underwent two large-scale renovations in the 1930s, as part of the Depression-era Works Progress Administration, and again in the 1980s, after decades of the usual neglect. 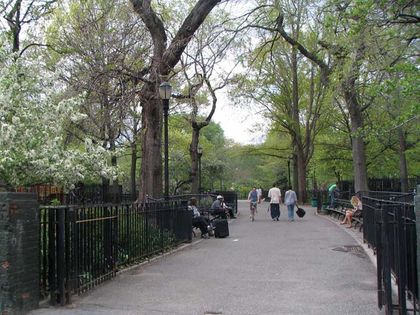 Like many other NYC public squares, Tompkins Square Park was originally used as a place where military commanders could review troops marching in formation, in this case the 7th Regiment, and you need a wide, flat space for that. Between 1836 and 1850 what had been a swampy and unstable area was gradually graded and landscaped, with some sycamore trees planted (most were chopped down when the Regiment arrived in the 1860s but some, on the outer edge of the park, survive). The park didn’t become a public area until 1878; like many other NYC locales and streets, it was named for NYS Governor, then Vice President Daniel D. Tompkins, who was from Staten Island; he is buried in St. Mark’s churchyard, a couple of blocks away.

In the 1950s and 1960s there was a gradual deterioration in NYC’s public spaces, as funds dried up and there was a general attitude on the part of our elected officials for deferred maintenance. Everything came to a head in the summer of 1988, when the Koch Administration decided to forcibly oust the drug dealers and homeless that had largely “occupied” the park, and a riot ensued. The necessity of the force used by the NYPD is debated to this day, but the cleanup was the first shot in the battle between the longtime residents of the East Village and gentrifiers, who’ve gained the upper hand in the near 25 years since the Tompkins Square Riots. 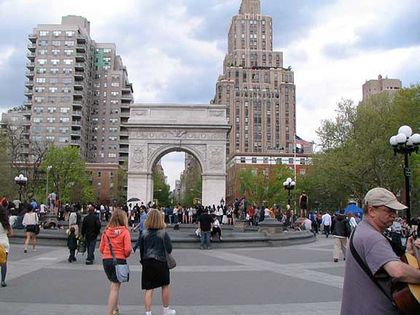 The history of Washington Square is long and varied; it was first a marshy area surrounding Minetta Brook, which ran from Midtown southwest to the Hudson River), then a cemetery (1797; a tombstone dated 1799 was actually found during the excavation process during renovations in 2011) a parade ground for military marching drills (1826); and finally, a public park (1827).

If roads czar Robert Moses had got his wish, the circle around the fountain, which was once used to turn 5th Ave. buses and was open to motor traffic when the Queen of Avenues was one-way, and the fountain would be moved to make way for a connector road between 5th Ave. and LaGuardia Pl. Locals fought Moses (as they did against his proposed Lower Manhattan Expressway on Broome St.) and after a lot of vitriol, the Master Builder backed down. However, the fountain was moved between 2007-2011.

Two memorials to historic figures stand in WSP, one to Giuseppe Garibaldi, a founder of the united Italy, and the lesser-known 1889 Alexander Lyman Holley Memorial, featuring a bust honoring the industrialist and steel pioneer by John Quincy Adams Ward.