Homage and Empathy in Rome

A week in the ancient capital of the world. 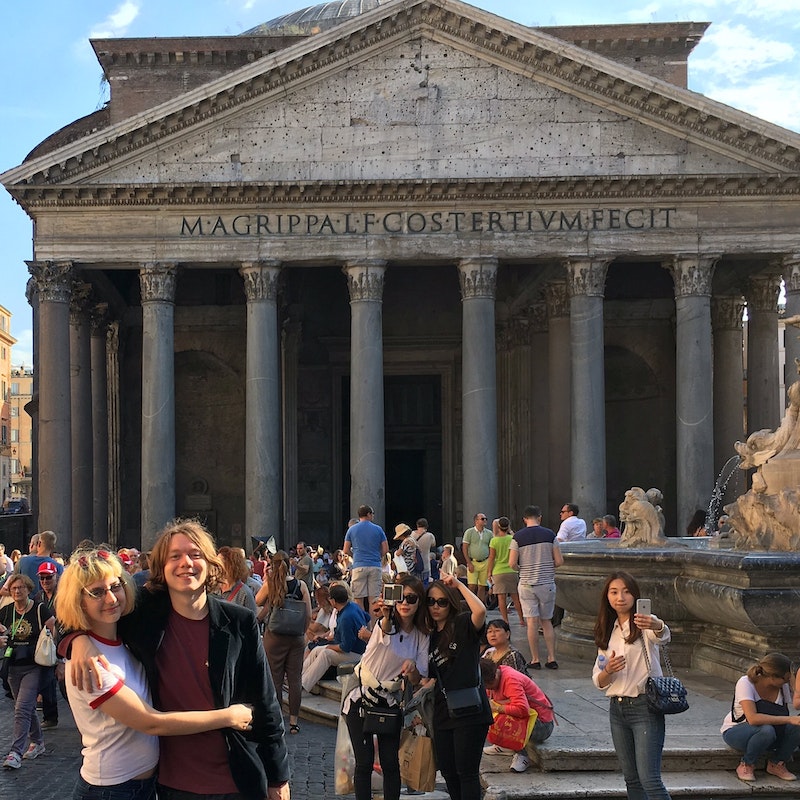 Why travel? Ever since 9/11, and especially since the increase in ISIS attacks on soft targets all over Europe and in the U.S. this past year, I haven’t had the urge to fly overseas like so many of my peers, who eagerly applied for study abroad programs in perilous countries like Turkey, Singapore, and China, where they arrest you for littering and execute you summarily for drug possession. What’s the point? It’s all the same anyway—I always sink into cynicism after arriving somewhere new, whether it’s in America or abroad, recognizing the homogenous effects of globalism driving in from the airport: McDonald’s, movie billboards, highways and intersections that might as well be somewhere in New York City. Of course this evaporates as soon as you get out and walk around, totally disoriented, surrounded by people speaking a language you don’t know. My brother Booker is off in Europe right now taking a six-week trek across the continent as a celebratory cap to graduating college a year early, and when I was offered the chance to join him in Paris earlier this year, I balked, still frazzled by ISIS’s semi-frequent strikes in France. But I didn’t want to send him off on his own, so when the choice was shifted to Rome, I sat on it for a bit, considered the lack of Islamic terrorism in Italy as of yet, and agreed to join him there for a week on the inaugural stop of his trip. Before you break out the violins, I realize this is a very precious position and mood to be in, and the chance to see the ancient city I’d spent so many years studying in grade school overrode my heightened and somewhat irrational fear of getting taken out by a bomb blast or a gang of black-masked thugs wielding AK-47s.

The rush of adrenaline I was expecting upon landing was eradicated by a crippling pressure headache that left me clutching my skull and drooling in agony, fearing an aneurysm and a steady drip of blood from my nose at any minute. I didn’t beat the jet lag—too wrecked by my migraine, I went right to bed when Booker, my girlfriend, and I got to Rome, where it was only eight in the morning. My brother managed to snag a sweet spot on AirBnB, much nicer and cheaper than any hotel on offer. When I woke up around seven that night, I went out for a smoke and started walking, confident my internal compass would guide me back once I wandered out a bit too far. But my sense of direction was baffled, and before I realized that the street names were all chiseled in stone high up on building corners, I wandered too far for comfort, coming across a Lupin III-themed cigarette machine and a gaggle of teenagers clogging an intersection, all eating gelato and taking selfies and standing in front of speeding cars. Eventually I made it back for a barrage of ribbing from Booker and Leigh Ann, saying I’d lost my touch. Well, I never did well in Spanish class, and I still know absolutely no Italian, so it could’ve been worse.

That misadventure was also the only time a stranger on the street asked me for a cigarette. I briskly brushed him off, too frazzled to do anything but keep moving. I quickly discovered that pretty much everyone in Rome smokes, and while it’s still banned inside just like most everywhere else, every restaurant with outdoor seating had an ashtray on every table, and employees taking smoke breaks barely leaned outside to indulge. It was a nice comfort in a country where everyone insists you must drink the wine, you must drink the wine, please—drink the wine for me! Too bad I’m allergic to alcohol, a genetic blessing, considering my Irish heritage. No doubt I’d be a raging alcoholic if that weren’t the case. Booker and Leigh Ann enjoy a glass of wine or a gin and tonic here and there, but they’re not big drinkers either, so our late night activities were pretty subdued: dinner, and a bit of jawing and joking back at the apartment. One of them suggested we go out at least one night, but the thought of clubbing or even checking out a bar seemed insane to me, especially since we all hate it in America—imagine how much more stressful and unpleasant it would be in a country where we don’t speak the language.

Any discrimination against “the ugly American” appears to have evaporated after eight years of Obama, likely still in a holding pattern while everyone watches and waits with clenched teeth and fists hoping that Donald Trump’s unlikely ascent comes to an end on November 8th. There were no smug waiters or pedestrians eager to spit and scoff at us as we struggled to communicate and navigate the city, already full of tourists from around the world. We spent our week in Rome visiting all the prerequisite sites: the Colosseum, the Pantheon, Spanish Steps, Trevi Fountain, and a handful of churches and museums with works by Caravaggio, Leigh Ann’s favorite painter. For me, the Colosseum was by far the most awe-inspiring, an overwhelming and intoxicating sight. After a bit of confused wandering through choked crowds, we made it inside with a tour guide, who led us around and gave us a brief overview of highlights and history through her portable PA. Peering over the edge looking onto the oval arena, she showed us the labyrinth of tunnels and cages formerly covered by wood and sand, “used to absorb the blood, as you can imagine.” It was remarkable how much the place resembled a modern baseball stadium, and chilling to think about how much pain, suffering, and death went on there, before sell out audiences of 80,000 enthusiastic Romans. Now there’s a gift shop, where you can buy jewelry, fridge magnets, and abridged copies of Edward Gibbon’s The History of the Decline and Fall of the Roman Empire. Colin Kaepernick shows us that there is still much progress to be made in major league sports and our country, but it’s important to acknowledge how far civilization has come in 2,000 years in our primal desire for violence. Irreversible brain damage and CTE is no joke, but at least our thirst for blood sport has moved beyond lions and bears eating slaves and gladiators before hysterical crowds out for a casual afternoon spectacle. Man is the bastard, but depending how much longer we can last under an increasingly fraught climate, perhaps we can redeem ourselves and build the world John Lennon dreamed about in “Imagine.”

Nauseated yet? I was nervous walking around tourist-choked areas of Rome and eating outside, always expecting the worst, whether an earthquake or a bomb blast. I still jump up bug-eyed whenever a truck backfires or a swarm of sirens approach, but my trip to Rome was without incident: no pickpocket children or sleazy hustlers that our parents warned us about. I was grateful to soak up the history of Rome, where so many souls passed through, suffering through famine, disease, megalomaniacal emperors, and natural disasters. The monuments remain, and the song and spirit in all of us resonated in those churches of worship and death, spectacular sculptures, architecture, and paintings that remain all these years later. The noise of bipartisanship and the struggles of daily duties evaporate before wonders like the Colosseum and the Ecstasy of Saint Teresa, standing in the place of people just like us who lived contemplating and coping with a world that offers nothing but indifference in the face of prayer and questioning. It puts you in your place, slow and square enough to realize for a moment who you are and where you came from. I’m thankful for the chance to be more than another ugly American, gripping a fanny pack and seeking out the closest McDonald’s.