Hitler vowed to make the art world pay for their insolence. 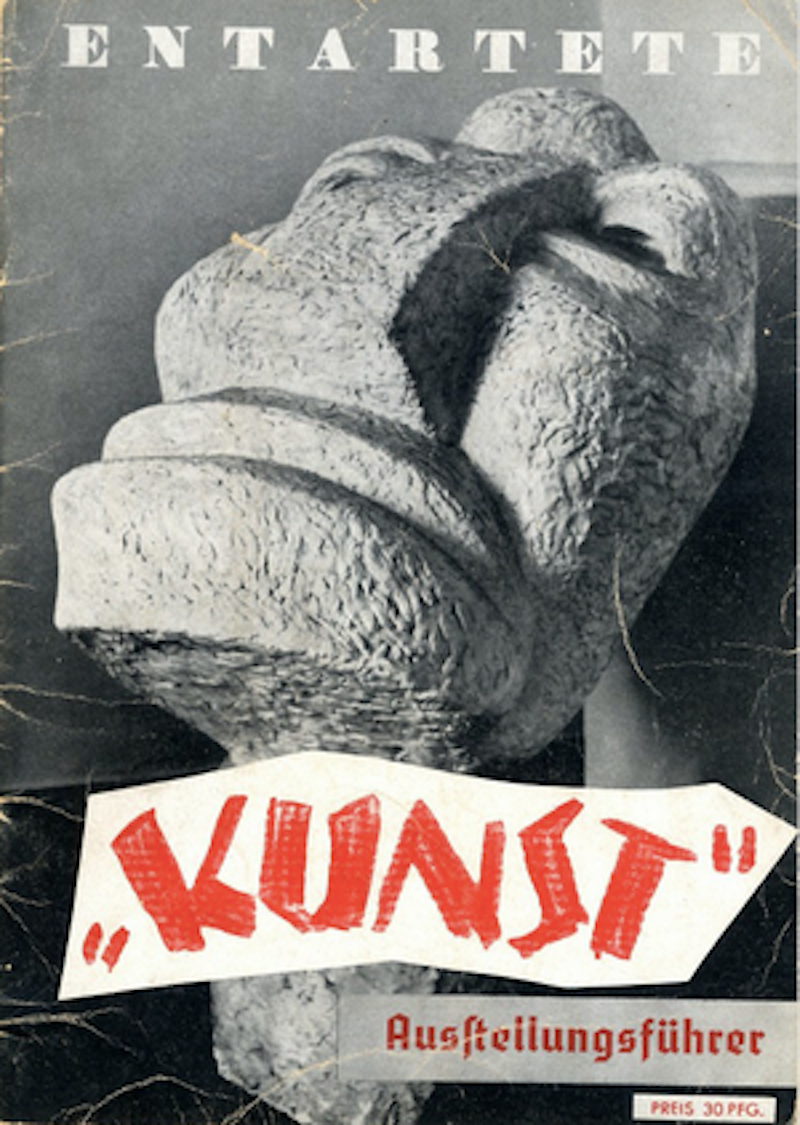 Adolf Hitler hated modern art. He believed the only true art was that which imitated the natural world. As a young artist he painted sentimental renderings of mountains, landscapes and Viennese buildings. He claimed to be inspired by Greco-Roman Classicism but his paintings were more like elaborate postcards. He twice submitted his portfolio to the Vienna Academy of Visual Arts, and they rejected him both times deeming his drawing skills “unsatisfactory.” Hitler vowed to make the art world pay for their insolence.

When Hitler came to power in 1933, he considered art one of the most important tools to purify the nation. The purpose of art was to shape public attitudes by promoting the virtues of German life: “Kinder, Küche, Kirche” (family, home and church).In a 1935 Party Day speech Hitler said, “We shall discover and encourage artists who are able to impress upon the German people the cultural stamp of the German race.”

Modern art had no place in Hitler’s Germany.

By 1937, Nazi policy incorporated the concept of degeneracy. Any artwork deemed degenerate or subversive by Hitler or the National Socialist Party was classified under the label Entartete Kunst meaning Degenerate Art. Propaganda Minister Joseph Goebbels established the Reich Chamber of Visual Art. This committee confiscated artworks from museums and private collections throughout the country. They seized more than 16,000 works including paintings by Van Gogh, Picasso, Matisse, Chagall and Dali. Hundreds of artists were suddenly branded enemies of the state and a threat to German culture.

Just across the park the Nazis sponsored a second show called Die Ausstellung Entartete Kunst (the Degenerate Art Show). This exhibition showcased art considered culturally “dangerous.” Artists featured included Max Beckmann, Ernst Ludwig Kirchner, Marc Chagall and Georg Grosz. In his opening day speech he said, “These are works of art that cannot be understood in themselves but need some pretentious instruction book to justify their existence and will never again find their way to the German people.”

Confiscated paintings were hung on poorly-lit walls, askew and upside down. Slogans like “nature as seen through sick minds” were scrawled beside the pieces. Art was divided into different rooms by category: art by Jews or Communists, blasphemous art, art critical of soldiers and art offensive to German women. A room displaying abstract art was called “the insanity room.”

The goal of the exhibit was to mock modern art and convince citizens that these artists were part of an evil plot against the German people. Curators hired actors to mingle with the crowd insulting the art “as primitive and lacking artistic skill.” An entry in the exhibition handbook read, “In the paintings and drawings of this chamber of horrors there is no telling what is in the sick brains of those who wield the brush or the pencil.”

Hitler felt a particular disdain toward the Expressionist artists such as Ernst Ludwig Kirchner and Karl-Schmidt Rotluff. He preferred art that copied “real life.” The Expressionists reflected the murky psychological landscapes beneath the surface. Expressionist art utilized violent colors, distorted figures and images of pain and suffering.

The Degenerate Art Exhibit toured Germany and Austria for four years. More than three million people attended the show, three times more than those who visited theGreat German Art Exhibition. At the show’s completion, Joseph Goebbels wrote in his diary, “Paintings from the degenerate art action will now be offered on the international art market. In so doing we hope at least to make some money from this garbage.”

Many of the pieces were sold at auction in Switzerland. This included The Sick Child by Edvard Munch (now in the Tate collection). In 1939 and 1942, the Nazis staged massive bonfires burning thousands of “degenerate artworks.” Destroyed works included paintings by Picasso, Klee, Dali, Miró, Max Ernst and Fernand Leger. Nazi officials like Herman Göringgrabbed artworks for themselves. (Göringtook a Van Gogh and a Cézanne.)

In their obsession to purify German culture, the Nazis succeeded in selling off or destroying their cultural heritage. Artists were left to fend for themselves. Those who remained in Germany were subject to Gestapo raids and weren’t permitted to purchase art supplies or teach at universities. Others like Max Beckmann, Paul Klee and Max Ernst fled the country. Ernst Ludwig Kirchner committed suicide. Otto Dix retreated to the countryside where he painted inoffensive landscapes that wouldn’t anger authorities.

By the end of the war, it became clear why Hitler was so threatened by modern art. The Expressionists discerned the real-world intentions of the Nazis. Their paintings were prophetic expressing a haunting vision of the Nazis’ true intentions. Like all totalitarians, Hitler was guilty of projection.