The BMT Chambers St. serving J and Z trains is by far the most decrepit, degenerate station in the NYC subway system. 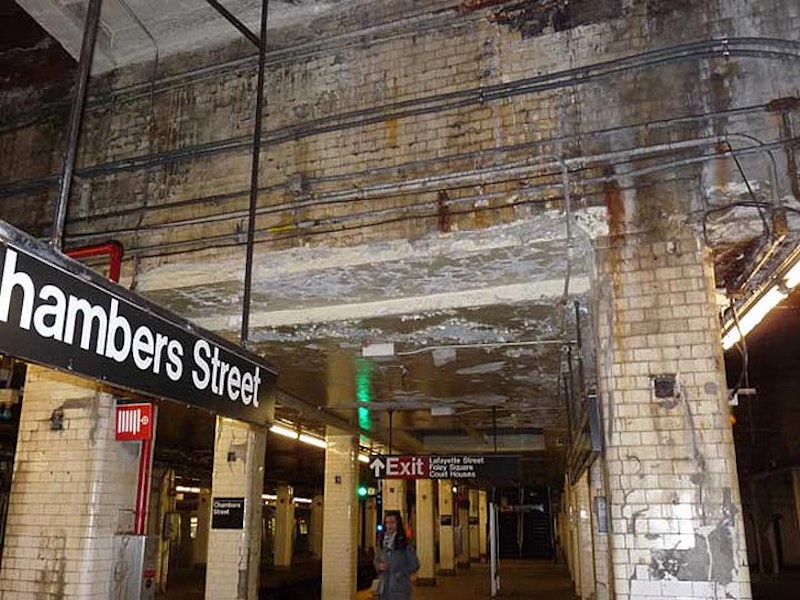 The MTA, for decades, resisted cleaning up the BMT Chambers St. station serving J and Z trains, by far the most decrepit, degenerate station in the system. That changed in 2019, when a limited cleanup was announced; but the station’s Stygian de-evolution won’t be easily expunged, and its shambling appearance has attracted me to snap its portrait on several occasions. It’s a dungeon-like space, with destroyed walls, disgusting mold, and wonderful mosaics and terra cotta plaques that were once beautiful, but have slipped into ruin.

On weekends, this is a line terminal, and sits directly under the NYC Municipal Building—one of the seats of NYC government and services. The building was the home of the WNYC radio studios, where I appeared on the Brian Lehrer show in 2006 upon the release of my first book, Forgotten New York. 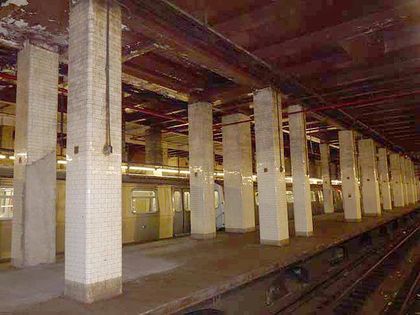 Note the tiled columns. The BMT Chambers station sits directly beneath the Municipal Building, and in such an occurrence throughout the system, the iron station columns are generally buttressed with extra concrete that is covered with tilework. 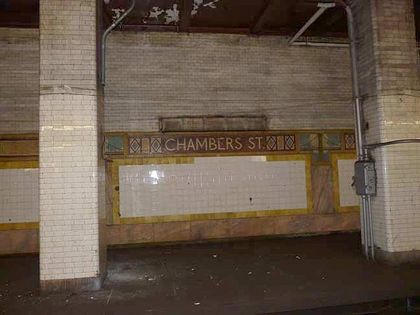 Now to the abandoned eastern platform. When the Chambers St. station opened in March 1913, the side platforms were used for exiting the station only, and the station served as the southern terminal. In 1915, the station also began to serve as the terminal for trains coming off the southern tracks on the Manhattan Bridge. In 1931, two extra stations were added south of Chambers: Fulton and Broad; and the tunnel was extended to connect with the BMT Montague Tunnel, currently serving R trains. After the M train was routed off the Nassau St. BMT and up 6th Ave. in 2010, that connection hasn’t been used in revenue service. The Broad St. station, as well as the 8th Ave. station on the L train Canarsie Line, was built according to standards then in use on the IND stations, with uni-colored wall signs and sanserif type.

From 1913 to 1917, the station also served as the southern terminal for some Long Island Rail Road trains. The LIRR would use BMT tracks on the Williamsburg Bridge, the Brooklyn Broadway el on Broadway and Fulton St., and use a flyover at Chestnut St. (now the site of the west end of Conduit Blvd.) to LIRR tracks on Atlantic Ave., long before they were placed in a tunnel under the avenue in 1940. The LIRR would then use the Rockaway line, still under its control, and cross Jamaica Bay to the Rockaway peninsula. 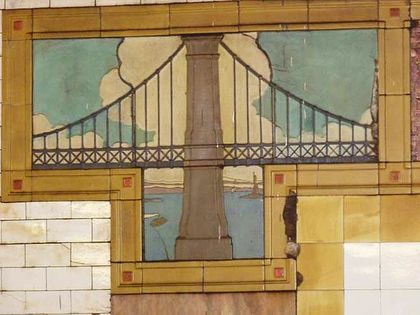 Because the line was originally going to connect to tracks on the Brooklyn Bridge, large T-shaped terra cotta plaques depicting the bridge were installed on the two exit platforms. The plaques depict the East River looking south, with a steamship on the left and Statue of Liberty on the right. The Brooklyn Bridge’s crosswise cables weren’t part of the design, whether for a lack of money or because of difficulty depicting them.

Large plaques such as this were done by original subway station designers Heins and LaFarge, but by this time Squire Vickers had assumed the mantle. He executed large terra cotta plaques here, but they were more simplified than the ones done by H&F. On Vickers’ later BMT and IRT stations, he designed smaller mosaic plaques as station identifiers, and with the Machine Age IND, dispensed with them entirely. 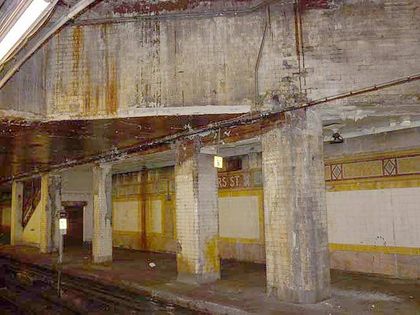 The side exit platform at Chambers hasn’t been used since 1931, when the line was extended south, and it appears there’s been no maintenance other than the bare minimum since that time. So, you would almost be able to give the Transit Authority, later the MTA, a pass for not maintaining the side platform at all, since no one uses it (a similar situation exists at Hoyt-Schermerhorn in Brooklyn, where a platform servicing trains that used to arrive from the Court Street Shuttle has been closed down; and a center platform at the IND Columbus Circle station has been converted into a walkway—train doors don’t open onto it. 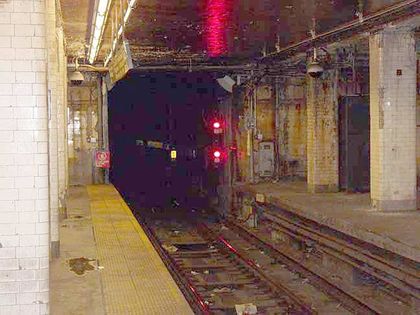 This tunnel dead-ends north of the Bowery. Tracks here formerly connected to the Manhattan Bridge. Revenue trains on this side can switch over to tracks using the Williamsburg. The depths of the tunnel remain undocumented.