“You’re wearing tights? LOL you must be a girl.” 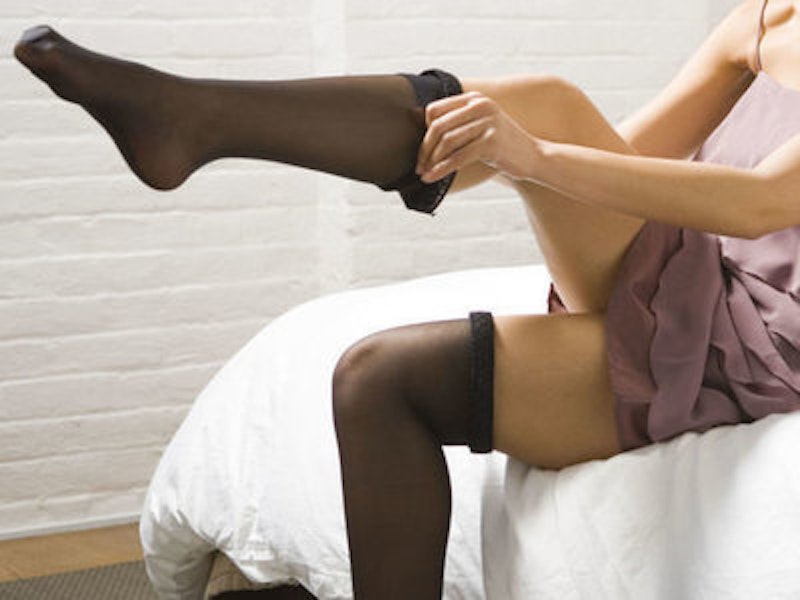 That’s my friend Anna’s brain talking. We were chatting the other day about clothes because that’s the sort of thing trans girls do all the time. This time, though, there was a deeper purpose to it. I’d been musing on how much happier and content I feel just from the simple act of putting on a skirt.

Presentation wasn’t something I considered important when convinced I was male. Clothes held little interest for me; I rarely ever changed so much as a t-shirt in the morning. Whatever I yanked out of my closet was good enough. I rationalized this with my belief that I didn’t really look good in anything, but that wasn’t the whole truth. Sure, I didn’t like the way I looked in “boy clothes,” but that was because I found “boy clothes” infinitely less interesting in general than skirts, dresses, and tights. I just wasn’t ready to admit it.

Even after I did, however, I still had hurdles to overcome. Tatiana Maslany, star of Orphan Black and Queen of Everything, said something apt about appearances once: “Clothing and makeup and hair and all of that... indicates the kind of person you are inside and the person you are presenting on the outside. Sometimes they are in conflict, and sometimes they are the same. That psychology of the exterior informing the interior is just so interesting.” After quietly fessing up to my freakish need to put on a skirt, I went for it, but ran into one of my first recognizably dysphoric experiences: my bushy boy-legs stuck out and ruined the effect. Tights didn’t help; the hair still wormed through. Despite my best efforts (at the time) to wrangle my exterior into cooperation with my interior, the kind of femininity I desired was still out of reach.

Anna (which isn’t her real name, but is adorably apropos) had a similar experience. The first time she went dress shopping alone, she balked at seeing her unshorn legs in the mirror and had to leave immediately. It wasn’t until she shaved and put on a pair of tights under her pants that clothes shopping became bearable, but when she did, it was a revelation. “When I started trying things on,” she gushed, “I literally felt cute in my own body for the first time ever.” I felt the same way last summer after shaving my legs and putting on the first skirt I’d ever owned. It’s a feeling of freedom and fulfillment I’m often at a loss to describe.

Of course, these emotions we felt—and still feel—are brought on in large part by social conditioning. (A less charitable writer might say “brainwashing.”) “They’re not women’s clothes, they’re my clothes,” Eddie Izzard once said to an interviewer who asked about his famous fondness for cross-dressing. Clothes have no genders but those we give them, and there shouldn’t be any restrictions on who can wear what.

But in all honesty, breaking down those barriers isn’t always something I want to do. I don’t want to hold back the feminist movement, but I also don’t want to let go of my love for traditionally “feminine” modes of presentation. If skirts are associated with girls, then putting one on brings me closer to what I want to be—and what my dysphoria so frequently insists I’m not. I choose to embrace certain gendered stereotypes because they actually make me feel better. When I’m having a bad day, I can take off my pants (a liberating act in itself), throw on a skirt, and feel my mood instantly brighten as if by some curious act of transy magic.

So if you see a couple of trans girls wandering the streets of New York in the snow wearing skirts and sheer tights, grinning through their chattering teeth, you needn’t worry about us. Anna and I know what we’re doing, and nothing—not even an act of God—can stop us from finally wearing exactly what we want.