Hippie Goddesses of the 1970s

They had a swagger onstage, while also projecting various devastating flavors of femininity. 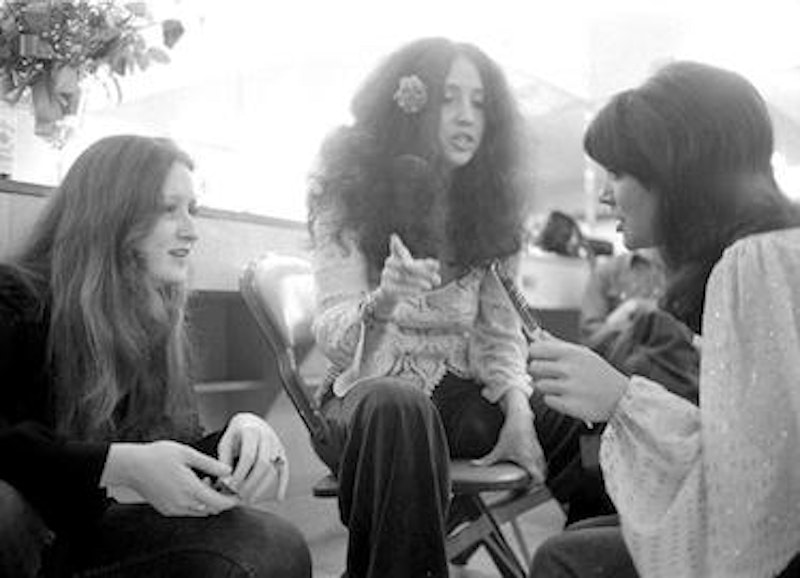 I almost went with “hippie chicks” in the headline, since the term was current circa 1972 even among the young deities in question. “Hippie women” just seems wrong—maybe because we were all so young and “women” were our mothers, whereas “female hippies,” “hippettes,” etc. are just non-idiomatic. If vestigial or new-minted hippie chicks want to re-inform me on the proper jargon, I'm all ears. And before I begin, I just want to express my gratitude to a number of hippie chicks and goddesses for many elements of my development, and for making some great records too.

I might’ve included a number of people connected to those below or who made music in a similar vein, or we might assay a comprehensive history, beginning with Joan Baez and Joni Mitchell, proceeding through paradigm hippie looker Michelle Phillips, through folks like Nicolette Larson and Rita Coolidge, and on to the Roches and the McGarrigles, right up to the terrifying moment when the whole hippie-chick thing was definitively guillotined by Debbie Harry and Chrissie Hynde. But instead I'll tell or remind you of four of my favorite artists: Bonnie Raitt, Linda Ronstadt, Tracy Nelson, and Maria Muldaur.

They had a swagger onstage, while also projecting various devastating flavors of femininity. They were particularly excellent musicians and bandleaders, completely in charge of their own personae. Musically, they emerged in various ways from the folk scene, but they weren't folkies. Rather, they were part of a post-folk roots revival—encompassing blues, gospel, swing, soul, and country—which emanated from both coasts at once, as much from Boston as San Francisco. They were feminist pioneers in boy-dominated rock, and they were role models, crushes, and soundtracks at Bonzo Ragamuffin Prep, the hippie high school I "attended" in DC. The girls wanted to be them. I just wanted to love them, which I did and do.

Bonnie Raitt—daughter of a practicing Quaker who was also a Broadway star—finally got fully commercially recognized in the late-1980s, but we little hippies recognized her hard in the early-70s, when she was touring with great blues musicians and selling out McKeldin Hall in Georgetown every few weeks. Those early records—Bonnie Raitt, Takin' My Time, Give it Up, and Streetlights—sparkled, as her repertoire accumulated from excellent versions of the traditional ass-kicking sexy blues of people like Sippie Wallace to an original rock 'n’ roll featuring her slide guitar work, and her personality developed into an autonomous, feminist artist: sexy and smart as hell, fresh-sounding and traditional, with a great band and great songs.

We Bonzos saw Bonnie many times, including a couple of shows with Buddy Guy and Junior Wells: among the best I've ever attended. I was pretty obsessed with what she was doing musically (I wanted to be her harmonica player), but for my girlfriend, and in particular for her sister—who was also my brother's girlfriend and with whom I was secretly in love—she was the pioneer of a new way of being female. Bonnie herself has matured into it beautifully, with that devastating gray streak in her red hair and her series of Grammys.

Among these four, Linda Ronstadt was the most immediately commercially successful. Emerging from the naive band of hippies known as the Stone Poneys ("Different Drum"), she was soon associated with the southern-California country rock that we connect with the Eagles and Jackson Browne. She sounded great singing almost anything: that voice is amazingly tuneful and accessible with an underlying power, and she's tried many different styles over the decades. The 1970s singles were great, undeniable pop-rock hits, as well-made as anything on the radio in that period: "It's So Easy" or "You're No Good," for example. Underneath, however, they were also rootsy, and Linda studded her classic early records with traditional country songs and collaborations with people like Emmylou Harris. She has retired now, which makes me a bit wistful.

Tracy Nelson came out of the overlap of folk and blues in Chicago, and recorded an early album with the harmonica player Charlie Musselwhite. She soon moved on to San Francisco, where her band Mother Earth overlapped with the Airplane, the Dead, and so on. But Mother Earth kept it much tighter to the roots, and it seems to me like the basic influences on Nelson as a singer are gospel shouters like Mavis Staples and Dorothy Love Coates, with just a touch of Janis. She was definitely listening to the soul singers of her era as well.

Of all these singers, Tracy delivers the most straightforward vocal power, and her style is portable through some pretty hardcore country ("After the Fire is Gone" with Willie Nelson [no relation]) and rock and roll. And in correspondence to the vocals, she obviously projected the most earth-motherly persona of the four, definitely one of the flavors of hippie. One easy way to get a comparison is to check Nelson's version of "Love Has No Pride," a song also recorded by Raitt and Ronstadt. In the 1980s I spent a couple of New Year's Eves at her gigs at the Cellar Door: in the little room, she brought beauty to match the power.

Maria Muldaur has a fine new album—Don't You Feel My Leg: The Naughty, Bawdy Blues of Blue Lu Baker—and listening through it got me listening again to Maria's delightful 1970s catalogue. Starting with Jim Kweskin's Jug Band, she was in that period an eclectic artist, effortlessly rolling through all sorts of American music: show tunes and standards, jazz and swing, blues and country, soul and gospel. She recorded songs by Hoagy Carmichael, and perhaps he was the unlikely model of her approach. Her distinctive, girlish soprano sold the surprise pop hit "Midnight at the Oasis," which had precious little to do with the music on the charts at that time. Pretty soon, she’d made a move directly into gospel, and unlikely as it seems from the hyper-fem singer of "Waitress in a Donut Shop," she's one of the strongest white gospel singers this country has produced.

I never saw Maria live, but I crushed on her mightily, and I wandered with her through American musical history: she was the reason I started to listen to music from the 1920s to that moment. Even at a distance, she was my teacher. Really, hippie chicks and goddesses were important in many ways to my education. Listening again to these great records renews my attitude of gratitude.

These folks interacted in various ways with what I called Stoner Country, and the two playlists might be folded together.

Playlist: Hippie Goddesses of the 1970s:

(5) Bonnie Raitt, "Mighty Tight Woman" (the sexiest recording ever made)

(17) Tracy Nelson, "Temptation Took Control of Me and I Fell"

(24) Maria Muldaur, "As an Eagle Stirreth in Her Nest"