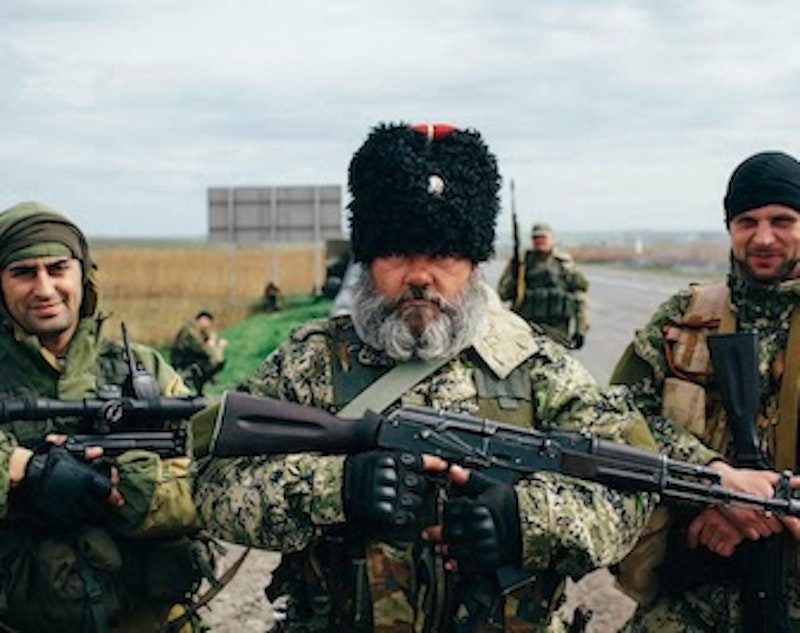 But what I find most disturbing are the anti-Russian voices of certain young American “journalists” (really they’re propagandists) working on the ground and officially credentialled in Kiev—and thus by definition having made their peace with Ukraine’s regime. I wonder in all innocence—what compels a young American journalist, like a Christopher Miller or a Melinda Haring, to move to a fascist capital and take up his or her pen on behalf of the inheritors of the death’s-head banner of the SS?

Is it anti-Russian racism, that epidemic contemporary malady, amped up by Zionist/neo-liberal propaganda until it becomes militant, fanatical, near-exterminationist? Is it a peculiarly Millennial delusion that accounts for this —a moral sickness to which today’s young are, perhaps, particularly susceptible?

To support the German Nazis of the 1930s would have brought, I can imagine, certain superficial benefits to those young Western Hitlerite fellow-travellers willing to expatriate themselves to the Third Reich—well-made stollen, the drama of torchlight parades, anonymous oral copulation with men in the pungent toilets of the Hauptbahnhof. But what does the young expatriate worshipper of the bloody Poroshenko regime get? Kiev is by all accounts a cesspool—charmless, AIDS-ridden, cultureless. (Except, that is, where remnants of its Russian culture tenuously remain, for the moment “uncleansed” by the rampaging Ukrainian brownshirts.)

I suppose it’s true conviction that drives the Millers, the Harings: A near-religious commitment to the fascisto-liberalism that is the true faith of the Western elites, a group with which young journalists identify in the same way that Daniel Larison and other Old American paleocon intellectuals, such as I, identify with the passion of the Russian Old Believers.

I read the disturbing Russian-hating effusions of a Miller, of a Haring, of a Damir Marusic, and ponder these conundrums—and I am sore troubled.

Needless to say, our small Russian Orthodox church community here in Indiana, watching the violent events unfold in the Kerch Strait, is disturbed by this latest impudence of a bloodthirsty Ukrainian imperialism.

There is among us a natural desire to aid the Russian cause materially (not just via prayer, though we have of course been praying passionately for Our Holy Mother Russia). And so a Muscovite immigrant parishioner of ours, Artur Ivanovich, suggests that, to raise money for the Russian military, we devise, create, and sell a special type of advent calendar this year. In this calendar, each little window would open not, as is customary, onto an image of a reassuring holiday scene, but rather onto a graphic photograph of the corpse of a dead Little Russian fascist thug, vanquished in the fighting in the Donbass.

Artur Ivanovich’s idea is that such a display will valorize the martial prowess of the heroic Great Russian Warrior in the Donbass, and thus win Holy Russia the sympathy it deserves among Westerners.

But I remarked that Putin, our “Little Father,” has made clear that no Russians are fighting in the Donbass, and that to say they are represents a capitulation to American propaganda. What’s happening in the Donbass is a civil war, as everyone should know by now, a civil war pitting good pro-Russian Ukrainians against wicked pro-Ukrainian Ukrainians.

I added that such an advent calendar could well prove counterproductive in our contemporary victim culture, perversely raising sympathy not for Great Russians, but for the dead Little Russians themselves.

Father Nicodemus, for his part, was concerned that certain pro-Russians in the paleocon pundit community, not to mention a good part of the several thousand people who make up the American Conservative subscriber pool, might be tempted to use such an advent calendar as “a small self-pleasure book.”

So Artur Ivanovich was forced to withdraw his idea.

And yet our parish continues to search for meaningful ways to aid the Great Russian resistance.

Meanwhile, we Orthodox Moscow Patriarchate must be prepared for a Christmas season the light of which is dimmed by the shadow of the persecution that our Russian co-religionists are suffering.

I myself will steel myself not only through prayer and devotion to our Lord, but also, to be frank, with the thought of the good things that the fast-ending Christmas feast will bring: roast goose in black currant sauce, pig’s feet in aspic, beet-and-potato salad in vinaigrette, three different types of meat pie bound by suet. As Christians, we are tasked by God to find hope in the depths of darkness—the candle a-flicker in the night.