Christmas Epicureanism and the Threat of Goose-Fucking 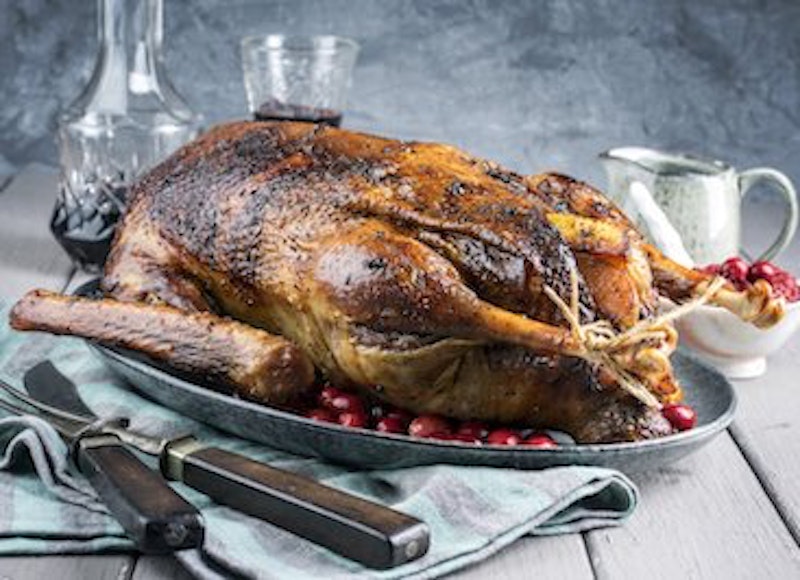 Toothsome delights of the Christmas season!

But that was a lifetime ago. Now Christmas is, while a splendid winter festival, second in my heart to Easter, the venerable Pascha, the true holy day on the Russian religious calendar—the Resurrection of Christ being a much more theologically meaningful event than his Birth, as glorious as that was.

But back to Christmas culinary delights, which I hope we can all discuss in a spirit of ecumenicism. Christmas Eve in the Russian tradition, as in others, is a vegetarian affair, as befitting the day that marks the end of the long Advent fast. I look forward to a frugal table of humble sochevnik, as the Russians call their wheat-berry porridge, and meatless beet soup, among other homely dishes. Christmas Eve (January 6, to be explicit) is a last belt-tightening before the next day’s culinary extravaganza.

And what an extravaganza it will be. The menu I’ve planned, and that Mother will execute, includes a roast goose served with fig and apple compote; confit of parsnips drizzled with currant sauce; potatoes mashed with dollops of our homestead butter; green beans amandine; pig trotters in aspic; gravy from chanterelles that Brother Gavin and I collected ourselves in the woods; mashed yams finished in the manner of a casserole, that is, in the oven after being drizzled with brown sugar and starred with sugar pecans; pound cake; a pumpkin bread pudding; roasted pears glazed in dessert wine; huckleberry ice cream; and Russian-style poppy-seed cake.

To drink, there will be a non-Jewish type of slivovitz that a fellow parishioner of ours brought back here to Indiana from Pskov; and near-beer for our non-tippling farmstead wives, who will be up into the night scrubbing the pots and pans from this feast, and thus will have to avoid the soporific effects of alcohol.

O sweetmeats to mark the birth of Our Savior!

Meanwhile, Brother Gavin’s behavior has become a little alarming. Or what would you call it if, tramping back from the pigsty on your property one recent blustery night, you found your Benedict Option partner in the situation that I did?

There Gavin stood, peering into the goose pen, dressed in only the long-johns, sandals, thermal t-shirt, fleece vest, and baggie shorts he wears years round (no coat), his skullcap askew as he muttered there in the frigid air.

I confess I was alarmed to see him; he seemed confused. He peered into the goose pen, where our Christmas goose is fattening before she undergoes the final earthly trial that Mother’s cleaver will bring.

His weak chin trembled under his sparse gray beard. I’m not sure whether he was answering me or just mumbling abstractedly into the air.

“I th- th- think we should enjoy that goose,” he said.

“We will, Gavin,” I said. “We’ll do just that during the Feast of the Birth of Our Lord.”

“No, no. It’s… It’s different than that. I think we should enjoy that goose.”

“Like I said, Gavin, we’ll do exactly that. Christ will be born! We’ll raise a glass to—”

“No,” he interrupted me. “We should enjoy that goose. Sister Marie doesn’t… see… she isn’t so attentive anymore. She says her hand starts to hurt.”

“I’m not sure I understand you, Gavin.”

But at that point the wind rose and carried away his voice.

Put this incident in the category labelled “inconclusive”—but still, I’m concerned. The Benedict Option community, steeped in piety and Russian Orthodox sacrament, is no foolproof shelter from the dark energies that can disorder the soul.

I need to consult Father Nicodemus for advice about Brother Gavin’s behavior, and I must pray.