They answer to God, not the politeness or respectability of middle-class society or popular culture. 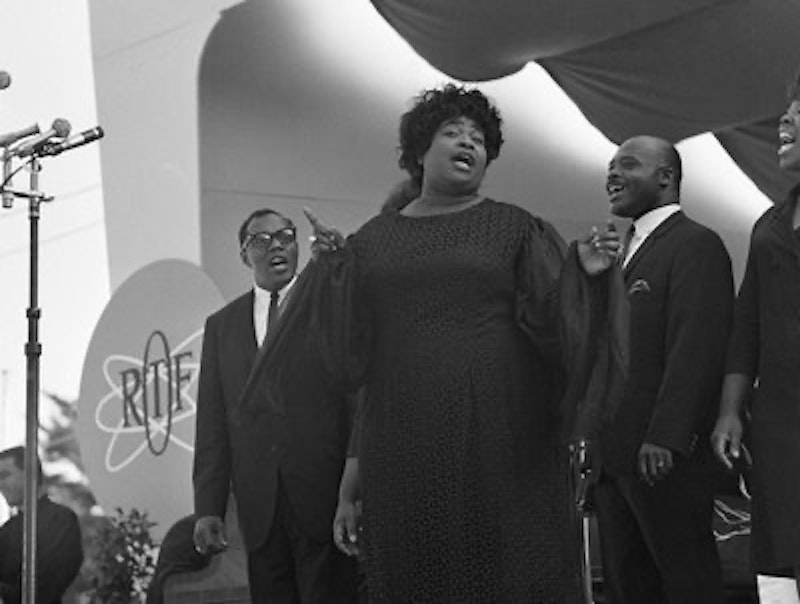 You may not have listened—or may not have listened carefully or recently—to some of the best and most influential singers of popular music of the 20th century. I mean women like Dorothy Love Coates, Marion Williams, Madame Edna Gallmon Cooke, Albertina Walker, Bessie Griffin, the Davis Sisters, and Shirley Caesar. In works of proficiency, variety, and intensity, female gospel singers shepherded their formidable self-expression, self-possession, presence, autonomy, artistry, and ecstasy through a dark age of gender.

It's sometimes forgotten that the 1920s were tolerant of, or enamored by, strong women in the arts. There was, for a moment, considerably less restraint, and more ways to conduct one's embodiment and present it, than there were immediately before or after. One might picture skinny flappers, but Mae West was also possible: deep-voiced, extremely formidable, highly inappropriate, full-bodied. The great blues belters of that era—Ma Rainey, Bessie Smith, Lucille Bogan—weren’t necessarily normatively beautiful or feminine, and they inhabited their bodies fully in their performances, owning their sexuality, as did West, with extreme self-confidence.

By the 1940s, all that was over. The women of the swing era—even the geniuses, such as Billie Holiday or Anita O'Day—were more traditionally feminine, often telling tragic tales of having been wronged or engaging in playful or polite flirtation. And by the 50s, as is notorious, America was subjected to a string of appropriate pseudo-housewives such as Doris Day and Patti Page.

But the sort of power and presence that Bessie Smith embodied took shelter in the church, even as gospel music emerged in figures like Thomas Dorsey from a synthesis of blues with hymns and spirituals into a mature popular style. When, by the late-60s, women like Aretha Franklin and Janis Joplin re-declared their liberation, they found models in the church. Their soul and rock 'n’ roll, their strong personae and fully-embodied performance styles, paid tribute to the improvisational brilliance of gospel’s great women.

If you want to tell the story that gets you from blues to soul music, it's not going to help much to move through swing and bop to free jazz. Benny Goodman, Duke Ellington, and Thelonious Monk aren't going to get you to Al Green. Neither will rhythm 'n’ blues or rock 'n’ roll of the period before black people got extruded. Wynonie Harris and Chuck Berry don't explain Sam Cooke, but the church gets you to Cooke and Al Green both, and African-American gospel grows directly out of the blues, generates an autonomous history, and eventuates directly in soul music, which then flows back into it and out of it through the 1970s and 80s to the present. Seemingly parochial, or of interest primarily to certain sorts of Christians, gospel in fact carries the main line of African-American—and hence American—popular music.

In the 1940s, some of the best acts in gospel were straightforwardly blueswomen. And often they were instrumentalists too, which is not something that women were doing on pop and swing bandstands, for the most part. Someone like Sister Rosetta Tharpe—recently inducted into the Rock 'n’ Roll Hall of Fame—was rocking the guitar as she sang her way gently or ferociously through both God-oriented and secular blues music. But she was emblematic of a cohort whose story is little told, of fiercely distinctive blues-gospel shouters, such as Willie Mae Ford Smith and Sister Cora Martin.

There were more directly beautiful and delicate approaches too, and my favorite recent re-acquaintance Edna Gallmon Cooke took her audience from a blues and jazz orientation in the 1940s to an almost Patsy-Cline-like sophistication by the early-60s, and from South Carolina to Philly, expressing her ecstatic devotion to Jesus the whole way. The great Mavis Staples and the Staple Singers never lost sight of this connection, even as they translated it to electric guitars and Civil Rights. For that matter, I don't think you get to the melismatic style of contemporary r ‘n’ b (Beyoncé, for example) without these singers, who developed elaborate vocabularies of ornament over their churches' stable, powerful substructure of keyboard and choir.

That these women were singing for God's glory is, I think, one element in the astonishing feeling of immediate presence and freedom that’s embodied in their recordings. They answer to God, not the politeness or respectability of middle-class society or popular culture, and God lets them go, lets them believe in and affirm themselves, or demands that they do so. The congregations for which or with which they performed were often predominantly female, and are often audible on the recordings. That too was a factor in the liberation of these voices into the highest realms of spirit and art, and in the supremely confident embodied experience that was the spiritual and artistic foundation of church communities.

And in denominations within which women were often not permitted to be official preachers or deacons, music was a form of ministry, a way of being a religious leader, of claiming authority.

In some sense, as well, gender and sexuality were out of play in gospel music, at least as explicit lyric themes. What mattered was not whether the singer/preacher was male or female, but whether they had the spirit and effectively communicated it to the audience/congregation. This too was potentially liberating; the performances take place well beyond the constricting gender roles so prominent in white culture of the period, and which might be experienced as fences or walls on every day but Sunday.

But though the translation of the vocabulary to the theme of romantic love and its discontents awaited the secularization of gospel performers such as Sam Cooke and Aretha, many different themes and moods are struck in gospel music. It’s a way of grappling with death (Albertina Walker, "If I Perish"), oppression (Davis Sisters, "Sinner Man, Where You Gonna Run To?"), and liberation (Edna Gallmon Cooke, "I've Been Redeemed"). Every mood of the religious is touched, from prophetic visions of the apocalypse (the evil groove of Shirley Caesar's "Millennial Reign"), loneliness and nostalgia for home (Caesar's "Stranger on the Road"), to mystical experiences of apotheosis (Marion Williams, "Jesus is All in All"). What emerges from a body of work such as Williams' or Dorothy Love Coates' is a rounded experience of a whole life, the biography of an individual spoken in her real voice, and of a congregation and a people, made whole and compelling as it emerges from the testimony of a particular body and spirit.

By the 1950s, African-American gospel was an autonomous entertainment industry with its own labels and venues and stars. The style was national, with regional variations in centers everywhere from Demopolis Alabama to Philadelphia, Detroit, and Los Angeles.

I generally end pieces like this with a playlist, but in this case (African-American gospel music by women, 1945-1980) I feel like this one needs to be at least 100 songs long, so I'm giving you a link to an iTunes list, which is still in continuous process as I work through my gospel phase. Tell me what's missing. I have de-emphasized the best-known figures (Mahalia Jackson and Aretha) and relentlessly emphasized Shirley Caesar. Caesar turns 80 this year, and America has produced few or no greater singers and few more inspiring pastors. Don't be afraid.