High in the Sky with Enzo Something

Monica recalls a transatlantic flight from Rome to New York in January, 1996. 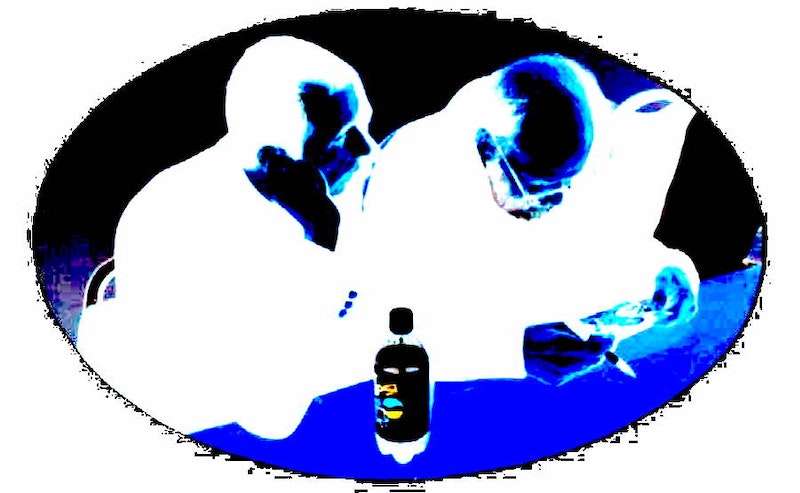 Guantanamo Bay wasn’t the beginning. I started doing private intelligence work long before the 2016 election. It was more like… hmm… well… alright bear with me, I’m trying to figure out a way to say this… I walked in on Hoover in his nighty. Let’s just say that my family has been “taken care of” for the rest of our lives (luckily the United States government still doesn’t recognize our family as inexplicably immortal. Will they ever? I’m not even sure they know we’re alive in the first place). But before the turn of the millennium, I did work as a spy in Italy for a time. I won’t say for what country, but I promise that nothing in this week’s column will be “redacted.”

In early January 1996, I was on a flight from Rome to New York. Although I can’t go into details about why I was there and who I was servicing, it was no Bunga Bunga party. Very routine stuff, very Guarding Tess (which my co-workers and I watched regularly, although they all—Italian, of course—found it very funny but far too slow). But I was still tired, and missed Roo: a month away from home meant a month’s worth of complaints and notes about what kinds of artistic successes and failures he’d had while I was gone. I promised myself I’d take a South African Quaalude and fall asleep—except I was sitting behind Enzo.

I never caught his last name, whether it started with a P or a B, but I know his name was Enzo. He was a filmmaker, a director, and very unhappy. I didn’t recognize him and I’d never heard of any of the films he mentioned directing (we didn’t get dial-up in the barn until 1998). This man was a “journeyman,” a workhorse, who I guess some would call a “misunderstood auteur” today, going by what little I know of very predictable trends in popular art criticism in the United States. But even if he’s beloved by someone today (I still don’t know his full name), he wasn’t respected at home. “They don’t like me, Luciano. They hate me. They call me ragazzina. I will not be a whore for these people. They detest me! They want to rape me in the streets!”

He was starting to get the plane’s attention—after all, First Class used to mean something. After a chiding by the stewardess, Enzo continued his tirade, practically yelling at his manager/producer/consigliere Luciano something, I’m not sure and I won’t ever remember at this point. “Enzo, you don’t understand. America is different. They have video. In Los Angeles, they had Z Channel—” Enzo interrupted, and I thanked God in that moment that I understood Italian, “WE ARE GOING TO NEW YORK, YOU MORON! NO ONE HAS Z CHANNEL IN MANHATTAN!” The flight attendants gave up after that. Luciano calmed him down and explained: “Enzo, your films have been distributed throughout the country on tape. Whether they’re playing on cable or not, any New Yorker can rent close to your complete works. Why do you think you’re the featured guest at Fangoria?”

“Oh!” Enzo threw his Scotch in the air. The stewardesses did nothing. “Stop talking about this fucking Fangoria! It’s a freak show. Who’s going to be there? How many people? Who? Why would they come to see me? Why would they come to see some Italian who is not Argento? Why? They do not even respect Antonioni anymore. Fellini never would’ve received such a beautiful funeral in the United States. I detest this place. I hated working here on so many films. I wish I could have filmed from my home. I wish I didn’t waste my life and stop myself from…”

He drifted off then, and so did I. By the time I woke up, we’d landed, and Enzo and Luciano were gone. I read Enzo’s obituary by chance just a few months later, but I still can’t remember his name, or any of his movies.