Herzog, Hölderlin, and the Chauvet Cave

Our seeking of the past seems to be an unconscious event, and yet it’s always present. We may reject it, but for how long? 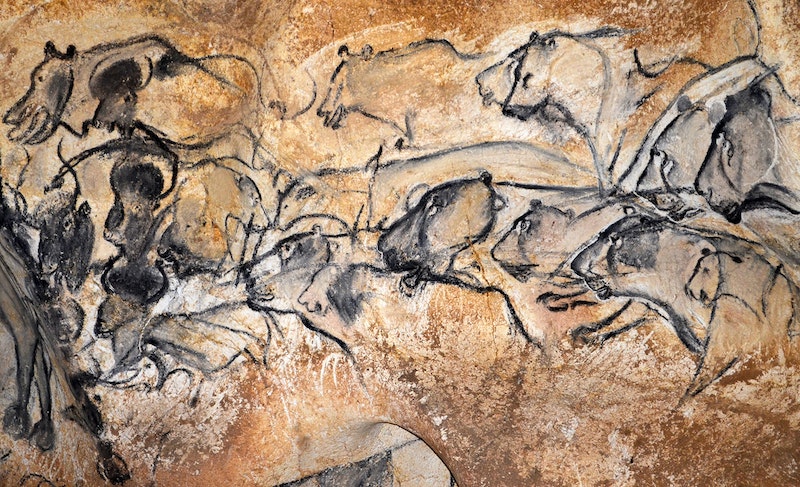 It takes a concerted effort to sit in silence, which may awaken us to the sense of wonder. But do we truly sit in awe of something that elevates humanity? This may be an existential condition that has afflicted humanity as long as man has been puzzled at his state of being. But current society’s insistence that because there is “nothing new under the sun,” we shouldn’t wonder or seek to find answers doesn’t appear to be a creative path toward a fuller life. But unlike the authors of Ecclesiastes, our overly ideological and polarized society is claiming there’s nothing new not because it’s seeking faith or spiritual resolution but because, at the core, it’s cynical, disregarding, and spiritually lazy.

In a 2016 conversation at Stanford University, the German filmmaker Werner Herzog urged new filmmakers not so much to make movies but to “read, read, read.” He expressed his love of books clearly and deems the act of reading much more important than the technical aspects of making a film. For Herzog, to read is to see, and to see is to experience the depth of darkness and light that the world has to offer.

Wonder is inevitably connected to memory. When we stand in awe of something beautiful, we’re acknowledging the past but also securing the continuity of beauty that is yet to be revealed. Herzog has explored this question in most of his films but nowhere is it more apparent than in his documentary, Cave of Forgotten Dreams (2010). In it, Herzog takes the audience into the Chauvet Cave, which contains paintings made more than 30,000 years ago. Images are mostly of animals but what’s most curious is the fact that images are represented in still “motion,” as if the artist was trying to capture the rapid and violent movements of horses, lions, bears, and hyenas. Evidence suggests that human beings didn’t live in the cave but only used it to create the paintings and enact certain rituals, perhaps an indication that there existed a belief in some kind of divine force.

As Herzog enters the cave with the archeologists who’ve discovered it and studied it, he’s urged to be silent and listen to the sound of the cave’s silence so that they may hear their own heartbeats. This is a poignant moment in the documentary. Everyone’s in the presence of something much higher than themselves. In fact, they’re witnessing something sacred. Herzog knows this and recognizes the “Wagnerian” and “operatic” quality of this place.

A cave like this is so removed from us in terms of time, and yet the discovery of human hand prints on some of the parts of the cave is yet another indication of our connection with the past. This embodiment is imperfect because it’s clear from the print that whomever decided to do this had a crooked pinky finger. As we watch this, we’re communicating with this distant nameless person, and yet we are palpably aware of the hand’s imposition but also invitation to see.

We can be in awe of different aspects of our world but ruins (whether man-made or created naturally) connect us to primitive desires that will forever be imprinted on us. These primitive desires need not be violent but actually peaceful, blissful, and child-like that they at once take us into the cave of our minds but also into the stars and the vastness of incomprehensible universe.

Is there something Romantic about this? Herzog thinks that a place like the Chauvet Cave surpasses even the Romantic expression for which he has great fondness. The German poet (and Herzog’s favorite) Friedrich Hölderlin (1770-1843) was taken by the ruins and the natural world so much that he drove himself into madness and physical sickness. In one of the poems titled “Greece,” Hölderlin writes:

"O you voices of fate, you ways of the wanderer!

For amid the blue of the school,

From afar, amid the uproar of heaven

Tempered by the existence of God, the thunder-storm.

Our seeking of the past seems to be an unconscious event, and yet it’s always present, both gently tapping and violently shaking our shoulders. We may reject it but for how long? As Carl Jung writes in Man and His Symbols, “Part of the unconscious consists of a multitude of temporarily obscured thoughts, impressions, and images, that, in spite of being lost, continue to influence our conscious mind.” Is this what happens when we enter the state of wonder? Shouldn’t we be more sensible than to allow the magnitude of nature to take us over and conquer our seemingly grand existence? We can’t escape it, just as we can’t escape nature.

Reflecting on the making of his film, Fitzcarraldo (1982), Herzog observed the brutality of nature around him. He writes: “I looked around, and there was the jungle, manifesting the [same] seething hatred, wrathful and steaming, while the river flowed by in majestic indifference and scornful condescension, ignoring everything: the plight of man, the burden of dreams, and the torments of time.” Nature doesn’t care but we ought to. Let wonder and memory continue to exist: side-by-side, in dialogue, in conflict, in fragmentation, in fullness, in all of the smallness and magnitude of human life.