Where country clubs and golf courses used to bloom, George Washington once marched. 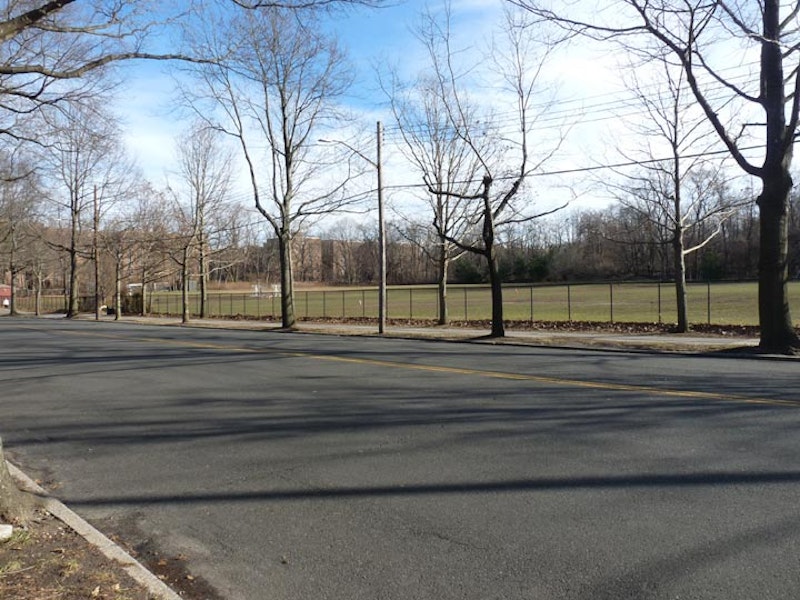 Last weekend, I walked from my home in Little Neck to 71st/Continental Ave. in Forest Hills. It was a rare 67-degree day in January. The route I chose was one of only two available to walkers, because there’s a barrier of parks and expressways separating Douglaston and Little Neck from the rest of Queens. I could’ve used Northern Blvd., which runs through Udalls Cove, over Alley Pond Park and over the Cross Island Parkway, but I’d done that countless times. Instead I swung south, along West Alley Rd., the only survivor of a group of “alley” roads in eastern Queens. The “alley” in question runs through a valley carved out by a trickling waterway running south of Little Neck Bay. Few roads traverse it.

I then traveled generally along 73rd Ave. and Jewel Ave. west through Flushing Meadows to Forest Hills. The low January sun was in my eyes much of the time, but the temperature was pleasant. 73rd, a major east-west route, is a very old route once called Blackstump Rd., as farmers with adjoining properties once marked them with blackened tree stumps. Jewel Ave. issues west from 73rd Ave. at 179th St. and crosses Flushing Meadows. It, too, is a survivor. It’s the only remnant of a group of streets east of Queens Blvd. in Forest Hills named in alphabetical order that turn up on maps from the early-20th Century. The streets in sequence were named Atom, Balfour, Chittenden, DeKoven, Euclid, Fife, Gown, Harvest, Ibis, Jewel, Kelvin, Livingston, Meteor, Nome, Occident, Pilgrim, Quality, Ruskin, Sample, Thurman, Uriu, Verona, Webb, and Zuni; it’s likely the streets were only on the planning boards till they were built mid-century, by which time they carried the numbers (68th Rd., 68th Dr. etc.) they do today.

I mostly walked through Oakland Gardens and Fresh Meadows. Before the mid-20th century, these realms were dominated by golf courses and country clubs, and farms before that. Today, they feature clusters of garden apartments—but the development of the last century couldn’t erase all of these areas’ history, and I’ll concentrate on some of it here. 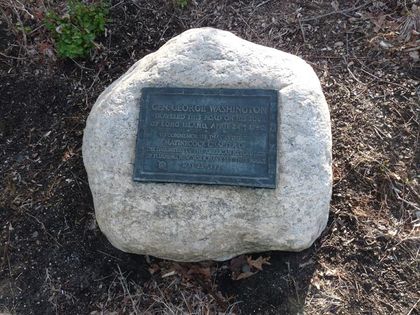 At the corner of West Alley Rd. and 233rd St., you’ll see a small, unobtrusive boulder with a verdigris’ed marker on it. The marker reads:

"George Washington traveled this road on his tour of Long Island, April 24, 1790. Commemorating this event, the Matinecock Chapter, Daughters of the American Revolution, Flushing, New York have set this mark. May 25, l934."

President Washington visited the plant nurseries of Flushing in 1789 and made a return visit to Queens and the rest of Long Island on a five-day swing the following year. Beginning April 20, he made a 165-mile round-robin journey from Brooklyn to Jamaica, Long Island’s South Shore, Patchogue, north to Setauket, Smithtown, Huntington, Oyster Bay, Roslyn, and Flushing, returning home to his Manhattan mansion on April 24. Washington was on his final leg of the tour when passing Alley Rd.

Washington’s principal concern on the trip was the condition of the soil; the USA in the pre-Industrial Revolution era was mostly farmland. The use of fertilizers and techniques like crop rotation were yet untried in Long Island. The President also wanted to personally thank patriots in Long Island who’d risked their lives as spies during the Revolutionary War. 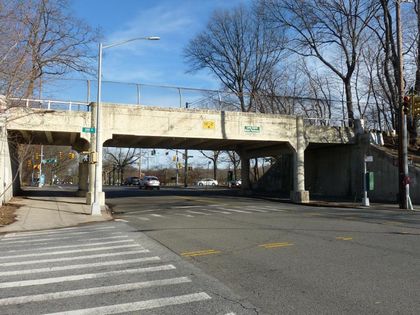 This overpass crosses 73rd Ave. just west of Francis Lewis Blvd., which is named for a Declaration signer from Queens County. It once carried auto traffic and was Long Island’s first superhighway, known as the Long Island Motor Parkway.

In 1904, the auto age had arrived in Long Island and industrialist heir William Kissam Vanderbilt helped ring it in with a road race that became known as the Vanderbilt Cup Race. It was one of the very first auto races and attracted drivers from the world over. The Cup Race was run in Nassau County on Jericho Turnpike, Bethpage Turnpike and Hempstead Turnpike—all now busy highways but in those days they were farm-to-market, unpaved roads.

The race attracted thousands of spectators every year despite dangerous conditions that produced occasional fatalities. In 1906, after several spectators broke through a wire fence in Mineola, a racecar smashed into a crowd, killing a spectator. Vanderbilt then decided that the Cup Race needed a separate course.

After a persuasive public relations campaign, land in the middle part of Long Island from the Queens line to Lake Ronkonkoma was purchased, although enough farmers and landowners held out along the original proposed route to make the new Motor Parkway a twisting, turning route. (The Northern State and Interborough Parkways, which followed in subsequent decades, suffered from a similar malady.)

Construction began in June 1908 and the first phase of the Motor Parkway was completed in 1910. The Parkway pioneered the use of overpasses and bridges to avoid intersections with previously existing roads. After the 1910 tilt, in which four people were killed and 20 injured, the race was never held again on Long Island. Indianapolis became the national capital of auto racing. Vanderbilt, though, was still in good shape because the Motor Parkway was designed as a toll road as well as a racecourse, and contained 12 tollbooths along its 43-mile route.

It cost $2 per tollbooth… a double-digit amount in today’s money. Vanderbilt reduced the toll to $1 by 1917, but that was still prohibitively high. By the 1920s, though, 150,000 vehicles used it annually. It was still the best-quality road in the area then, since the Northern and Southern State Parkways had yet to be built and Jericho and Hempstead Turnpikes were still two-lane farm roads. Vanderbilt continued to expand the Parkway westward, reaching Springfield Blvd. in 1911 and eventually, to Horace Harding Blvd. in what is now Fresh Meadows by 1926. Its final length was 45 miles.

The Depression, combined with Robert Moses‘ aggressive road building, combined to doom the Parkway. Traffic was siphoned off the narrow Motor Parkway by Moses’ superior roads. Vanderbilt turned the Parkway over to New York State in 1938 in exchange for back taxes, without having made a cent of profit. “A white elephant for the past 20 years,” Moses called it. Today, only a short section of the original Parkway in Suffolk County is open to traffic, while its Queens stretch was turned into a bike/walk path that surprises nearly everyone who is unaware of it. 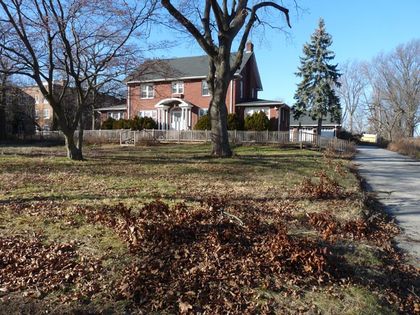 The Klein Farm, 73rd Ave. and 195th St., sold produce for years in a roadside stand until 2003, when the family sold it to a realtor. The farm had been in operation here since 1895. Since the farmhouse and property have never been landmarked, they’re now under the gun from developers and it seems that it’s only a matter of time until one of Queens’ last farms is gone.

The Kleins once owned approximately 200 acres in the area; some of it was sold in the 1940s to NY Life Insurance, which in turn built Fresh Meadows Houses. The late Parks Commissioner Henry Stern recognized the Kleins’ farm legacy by naming the adjacent playground for it in 1999. 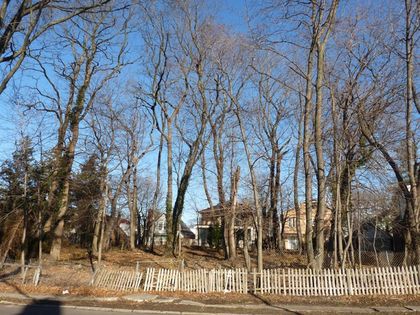 On 182nd St. just north of 73rd Ave. you’ll see what appears to be a weedy, empty lot, with ivy and ancient trees. This, though, is the cemetery of one of the farming families in the area, the Brinckerhoffs; there are 76 plots here dating from between 1736 and 1872. The tombstones have been long ago stolen or are buried underground. In the summer of 2012, the Brinckerhoff Cemetery was designated a landmark, ending a multi-decade tug of war between preservationists and developers hoping to build atop the cemetery.

The Brinckerhoff family arrived in New Netherland in the 1630s and had acquired land in what would be Fresh Meadows by 1730, and the family cemetery was instituted near the farm shortly after. The cemetery was in active use until the late-1800s. Though surrounding properties changed hands often in the early-20th century the cemetery and neighboring Brinckerhoff homestead were always excepted.

The cemetery was subject to frequent vandalism and the homestead was demolished in 1934. The cemetery property was transferred to the city to the DeDomenico family in the 1960s, which sold it to Linda’s CAI Trading in 2010.