A Beginner’s Guide to Rules, Regulations and Restrictions

The Court ought to be eliminated permanently. 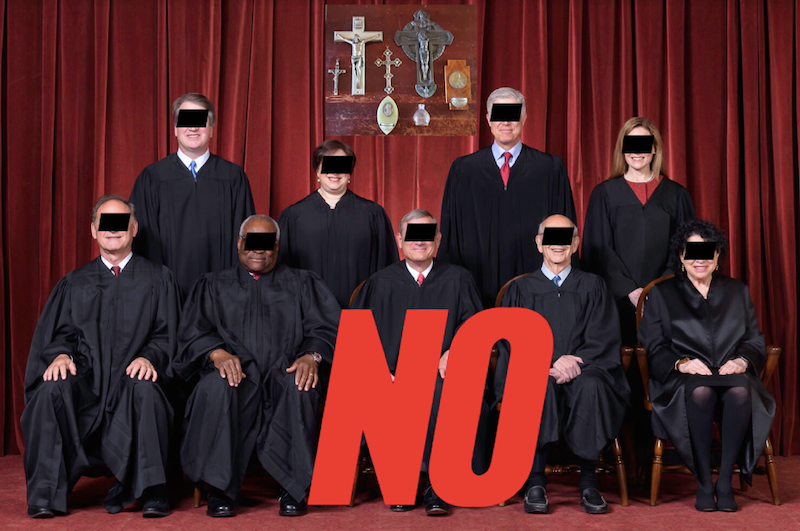 Signs are everywhere. There’s an official-looking notice on the wall that’s says NO. An edict from the church proclaiming NO, a list of commandments that dictates thou shalt not do, be or say. For or against this or that group, person or place. Rusty signs nailed to trees that state NO TRESPASSING. Infinite lists of things you can or can’t do outweigh personal freedoms of all the stuff you can get away with if you don’t get caught doing it. There’s punishment for breaking the rule of law, or the word of god. Listen to your mother. You have a right to remain silent. Read the signs.

There was a Top 40 hit from 1970, “Signs,” by the Five Man Electrical Band. A silly, yet poignant tune about religion, freedom of choice, and the signs of the times. Can’t you read the sign? There was Woody Guthrie’s “This Land Is Your Land,” with the line, “As I was walkin’ I saw a sign there/And that sign said, ‘No Trespassin’/But on the other side, it didn't say nothin’!/Now that side was made for you and me!” Woody wrote that song as a retort to the anthem “God Bless America,” sung by Kate Smith. “This Land Is Your Land” was originally penned “God Bless America, For Me.” A wry parody of condemnation. Guthrie was put off by overblown patriotic fervor, injecting god into the true nature of the nation’s toil and trouble. He hated hearing it played daily all over the radio dial, with Kate’s big-assed bluster, blurting out a prayer-like rendition that drove many to blubber in their beers. A soft-core subtle propaganda of tear-jerking brainwash. People eat that crap up.

I recently saw an official-looking plastic placard posted on a wall in the Philly subway, in bright red letters proclaiming, “Do Not Open—EMERGENCY EXIT ONLY.” Under the lettering was a tiny line of braille, I reckon it stated the same warning message. How ironic, to imagine a blind passenger trying to find that plastic notice in case of some real emergency. Then again, most signs are an absurd attempt to stop, or redirect people, to go, do, say, or act in ways they normally wouldn’t consider. Justice is blind.

Think about the Supreme Court. They’re not invisible, and don’t carry signs, but signal their intent. These buffoons have power given by the government. The buck stops at their seated feet, like omnipotent gods who pass the winds of change unto the people. They might as well be wearing white hoods, carry torches, and burn crosses for fun. There’s never been a more useless group of naysayers in this country’s history. The Court ought to be eliminated permanently. The Justices don’t represent or stand for the majority.

The old cross was driven through the heart of the Constitution. The poison of religious dogma’s infected the government, injecting a virus of narrow-minded personal fantasies into the country and infected the will of the people. If these jackals are allowed to spread their private parts to the public, no one will be safe. If allowed to, these closed-minded people will continue to eat away at our personal freedoms until they’ve consumed every last right of those who don’t conform to their twisted delusions. The separation of church and state, my ass.