A Night at Printworks 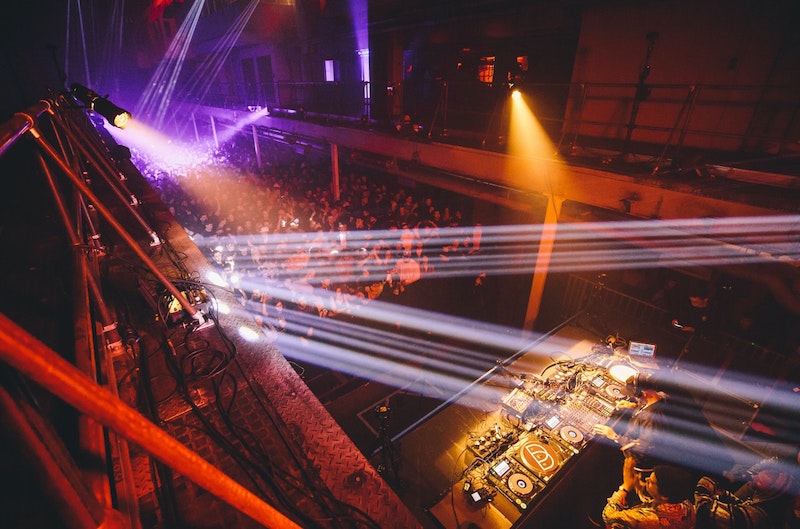 For months I couldn’t wait to check out Printworks, a brand new, “pop up,” 5,000-capacity multi-purpose experimental warehouse nightclub and event space, former home of the Metro and Evening Standard, meant to draw together the worlds of art, music, food, fashion, and design. Over the last few years the London club scene has taken a hit as legendary venues like Dance Tunnel and Plastic People have shuttered, with fabric dramatically and very suddenly closing and reopening, leading many to ring the death knell of nightlife in the capital.

Printworks is spread over 16 acres (119,200 square feet!) of a former printing press that will eventually have a diverse cultural program beyond its club music series and is largely seen as the antidote to the “decline” of nightlife in London. It’s the largest and most impressive venue to open here within the last three years. It’s also soundproof!

Good clubs should feel like a destination, a bit off the beaten path, a place you go out of your way to get to. At only five minutes away from the Canada Water underground station, Printworks is not difficult to get to but it’s also not a club you end up in because it’s next to 50 other shitty clubs or it’s two a.m. and you’re not ready to go home yet. You have to make the choice to go there, not least because, at the moment, you need to book your tickets weeks, if not months, in advance. Tickets sell out almost immediately.

As soon as I walk in I’m amazed by how large and unusual the space feels—the whole vibe is more summer music festival than nightclub. The security guy (cute) checks me and whisks me right in, no hassle, cool. Stairs up to the main rooms (Press Halls and Charge Bay) are marked “up” and “down”—how British—and a guy at the bottom of the stairs gives me a map. I roll upstairs to the Press Halls, catch a b2b session with Alinka and Wax Wings followed by Kim Ann Foxmann and I’m floored by the lighting design. So is everyone else. People are dancing, taking pictures of the lights. This is clearly a space that wants to be photographed, and I’m so glad the team behind the space realized the importance of great light in a nightclub. Light is part of the show.

The vibe in the Charge Bay, a smaller, more intimate dance floor, is sexy and upbeat and as soon as I walk in a guy and his girlfriend start asking me which of them is the better dancer. They both perform for me, and I say that clearly she’s the better dancer. “Aww, come on, man!” the boyfriend says, and I’m like sorry. He says all good and rubs the back of my head.

I love the guy in 1980s workout clothes at the back of the crowd, headband and everything, giving all he’s got, and I look at him and say, “Yes!” An hour later and I’m dancing next to a guy who has neon glow teeth and he’s smiling and really feeling his whole entire fantasy. Security guards in bright neon vests are dancing, too. I love it. I want a drink so I go back downstairs through the outdoor food court where there are lots of people too cool to be inside dancing, as it always is at clubs with outdoor spaces, and I go to the booth to get tokens. I really don’t like tokens in nightclubs. Case in point: later on I want another drink but I only have two tokens left and I need a half a token for a glass of wine and I totally don’t feel like begging someone for like half a token which means I’d have to go all the way back downstairs to buy five more tokens at £10 and I’m over it so I get a shot of vodka with my last two tokens and call it a night.

Printworks is going to be banging this summer, the place to be. It’s also definitely an asset for London, an ambitious project that clearly wants to leave a mark on the club and culture scene for years to come. I can’t wait to see what other cultural programs are in store. It’s also an extremely well-organized, relatively hassle-free machine, with nearly every aspect of the experience streamlined and painless. Printworks is a club for the 21st century; not only a nightclub but an epicenter of culture, home to a range of exciting cultural practices that spans the arts.

But there are definitely things that aren’t as great. The club is way too expensive—£35 entry if you don’t get your tickets right away. That’s €41! $43! Girl, no! What kind of person can afford to pay £35 entry to a club and then spend money on drinks and food, too? Which means that Printworks is not going to be a “go-to” club, a place you pump to regularly, unless you can afford it, but then I’d tell you you’re wasting your money because there are better parties that don’t cost nearly as much.

It’s also a shame that so much effort (and coin!) was spent on the lighting in the Press Halls but other aspects of the club—the hallways, the main entryway—feel like dead space. And that means you never really feel totally transported. A club should leave you hungry for more. I had a fabulous time at Printworks and I think it’s worth checking out at least once. But whether I go back will depend on what’s going on, who’s playing, and whether I can see it cheaper somewhere else in London. I won’t feel like I’m missing out if I don’t go.