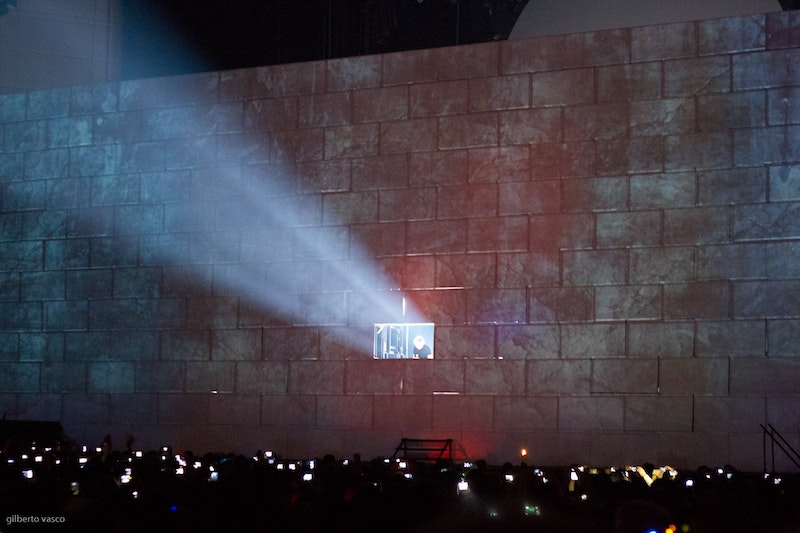 Former Pink Floyd bassist and songwriter Roger Waters is considering performing the band's 1979 album The Wall where President Trump is planning on building his wall. According to Consequence of Sound, Waters says the album is “very relevant now with Mr. Trump and all of this talk of building walls and creating as much enmity as possible between races and religions." Indeed, The Wall isn't just a story about a burned out rock star, but also serves as an artistic warning against the walls we build in our society. However, Trump seems to think Waters' warning is actually good politics.

For those unfamiliar with The Wall, the album tells the story of a burned out rock star named Pink whose unhappy life—his father dying in WWII, his overprotective mother, his abusive schoolmaster, his unfaithful wife—lead him to build a mental wall between him and the outside world. He retreats further into madness until he eventually turns one of his gigs into a fascist rally. The album ends with Pink putting himself on trial and forcing himself to tear down his wall.

The Wall soon took on a life of its own with an elaborate live show, a 1982 movie adaptation, and, most recently, the documentary Roger Waters: The Wall, which chronicles Waters’ The Wall Live tour from 2010-2013. For this tour, Waters expanded the legendary live show to address social and political issues. “Mother” became a statement on government surveillance and propaganda with images of surveillance cameras and the words, “Mother knows what’s best” projected onscreen. “Goodbye Blue Sky” featured an animation of bomber planes dropping symbols for Christianity, Judaism*, Islam, Communism, and Shell Oil onto cities below. [*Many people misinterpret Waters’ outspoken criticism of the Israeli Occupation as anti-Semitism, but as he often explains, he’s against Israeli’s policies, not Jews.] During “Another Brick in the Wall (Part 2),” a group of children came onstage wearing t-shirts that read, “Fear Builds Walls.”

Throughout his campaign, Trump promised to “build a wall” along the US/Mexico border, claiming that Mexico is sending drugs, crime, and rapists to the United States. He continued to amplify fears of The Other coming in by promising to ban Muslim refugees, which he implemented shortly after his inauguration. Even his campaign slogan “Make America Great Again” sounds eerily similar to the lyric “Would you like to see Britannia rule again?” from “Waiting for the Worms.” The result is an administration that looks more like a dictatorship than a presidency.

As Waters explained during a 1979 radio interview, when Pink turns into a fascist in The Wall, it’s “the end result of that much isolation and decay.” And what we’re seeing with the Trump administration is a reflection of that: when you have a wall building mentality, you lose your humanity in the process. By preying upon America’s fears of The Other coming to get us, Trump weaseled his way into the White House and made us see refugees and migrant workers—hell, brown people in general—as the enemy. On Election Day 2016, America did what Waters told us not to do.

But there’s still hope. Waters said before bringing The Wall to the US/Mexico border, “there will first need to be an awakening against these far-right policies.” Given the many nationwide protests that occurred within just the first month of Trump’s presidency, I think that’s a good sign. Unfortunately, a few protests only do so much. Like the protagonist of The Wall, America needs to put itself on trial and confront the walls it has built throughout the centuries. Hopefully, soon America will chant in unison, “Tear down the wall!”