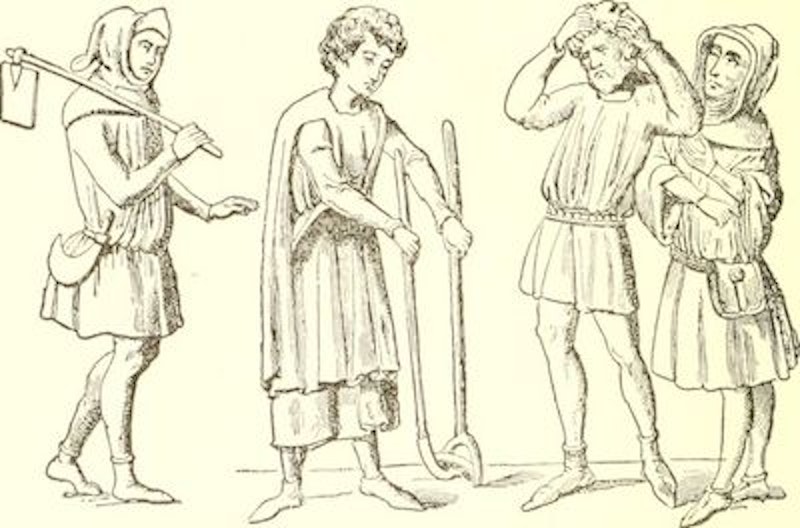 Tulkas Vangrimm the Younger stirred from his bed. He had sable-colored eyes that recalled those of his great-great-great grandfather, Vulkas Vangrimm the Middle One. In the early days of the 16th Summer Rising, Vulkas’s eyes had blazed with fury as he suppressed the Frendons and the New Tigorrs. A Tiggor, it should be noted, was a tiger-man hybrid created by the wizardly magicks of the Lovar Order (1503 Age of the Pink Cord—1321 Era of the Fresh Almonds). The Lovar, a school for wizards with INT scores in excess of 18, was the cause of untold mischief in the Land of Breeb. Breeb, our readers may remember, warred lo these many ages ago against Vandlesnap—to its eventual wrack and ruin, alas.

“Hast thou gone mad, wench?” Tulkas Vangrimm the Younger asked of the voluptuous wench adjacent to his seven-foot frame. “I only recently thrust my manhood upon thee.”

“But milord,” protested the wench, who was actually a Kernish Maid. She had fiery-red egg-shaped pupils and wore a kerchief fashioned from pure milsdown.

“I cannot expect you to understand this burden I bear,” continued Tulkas Vangrimm the Younger. He had traveled far, beginning his journey along the Royal Road, proceeding through the Shifting Banks and finally terminating here in the Vale of Rufftin.

“Milord,” beseeched the wench, her dilated topaz pupils flashing with dark thoughts of the Last Revolution.

“Nay, wench, wouldst thou wish that I force my manhood upon thee but again, and yea?” came Tulkas’ deep-voiced and brawny rejoinder, for he was of that mettle.

“Oh milord,” pleaded the wench, her narrow vermillion pupils fixing themselves into a rhomboid shape.

Now let us pause for a moment and consider the room, which was well-appointed enough for a Rufftinish dwelling. The wood boards on the floor were Bearscrap, the walls some kind of southern Giantstone or Flintboulder, and the fireplace crackling with magically-stoked Burnwater.

“Do you really want to keep working on this bullshit?” I asked my writing partner, who was slumped over a chair.

My writing partner, who looked neither more nor less like Donal Logue than he did yesterday, ignored me and continued flipping through his dog-eared March 1989 Spy (cover story: “Isn’t it Ironic?”).

“Seriously, why are we writing this?”

“Dude, Verner Morris died and we got awarded the contract to finish this up,” he finally responded. “It’s just a job.”

“I can’t even follow this continuity. There are like 20 different dating conventions in this realm, most of the male characters have the same name, and the obligatory sex scenes should come with a barf bag.”

He motioned toward the huge stack of handwritten notes near the word processor. “Look, just do whatever Verner’s instructions say.”

“But I can’t! I don’t know what they say! Nobody does. There’s no ending to this—it’s just a chronology combined with a bunch of statistics for a world that’s basically a mash-up of Plantagenet England and those unreadable Chris Tolkien compilations.”

“If we don’t finish this, the fans are gonna be heartbroken.”

I shook my head. “Nobody can possibly be a fan of this. There’s no reason to read these stories. Go read, like, a real history book or something. Do you know what happened in real history? Everything! Everything happened! All the things. And there are all kinds of people in real history, too: people of different races, sexual orientations, genders, you name it. It’s not just Nordic men with Ulkas names and huge penises who constantly force themselves upon wenches who always turn out to be evil. Seriously, why is every villain in this book a witch or a wench?”

“Not Vivish the Dragon,” my partner said.

“Vivish is a female dragon, and he has sex with her, too,” I replied.

“In a dream! He has sex with the dragon in a dream!”

“Yeah, but because it’s a dragon, it enters dreams for real—so they really have sex. Remember, because the dragon gets pregnant?”

“After carrying the baby for the previous 10 books!”

“She committed genocide. She killed everyone in the City of Gnome-Usurers!”

“No, no. We cut that section. When I was working with Verner, just before he died... he really started getting into that anti-Semitic stuff. So we cut the massacre of the Gnome-Usurers, because he was obviously just reenacting the Holocaust.”

“Nah. It’s hinted at in the text-based MS-DOS video game from the early 1980s, but nobody bought that.”

“Only 30 more books. Some of it seems fun. Isn’t the next Ulkas guy, the one who finally takes up the Everswing Sword, going to become the Lord High Archon of the Tiggorr Seraglio? That’ll be fun to write, yeah?”

“Lots of words. And look at the fan mail—people can’t wait for the next twist ending!” he said, grabbing a pile of unopened letters.

He riffled through some of the mail we had opened. “Oh yeah, this is awful. But it passes the time, right? Who knows what they’d be doing otherwise.”

He was correct, I suppose. It was getting late, we did have kids, and we had only 30 more of these tomes to write.