Growing Up on a Volcano

Life on the slopes of Kilauea. 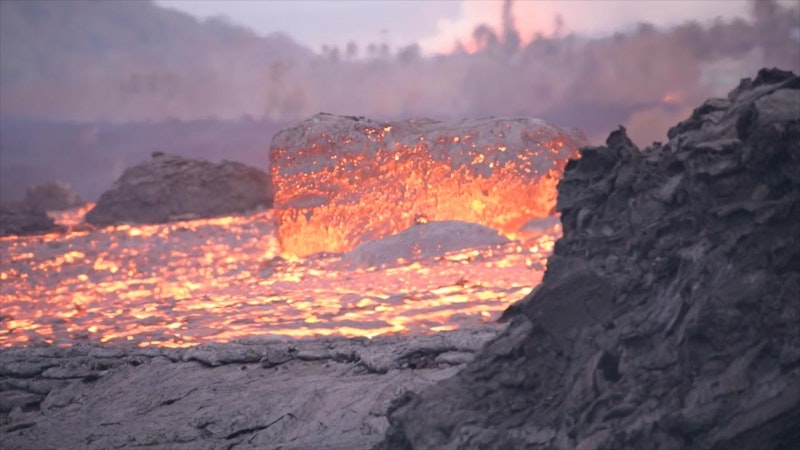 Before moving to the mainland, what people in Hawaii call the rest of the country, I’d lived most of my life on the slopes of Kilauea, which I was told in school is the world’s most active volcano. Still, I never thought much about the destructive power of lava, because I’d managed, by accident of birth, not to see it. I wasn’t quite a year old the last time a neighborhood was destroyed by an eruption, and even though I’d visited roads buried by that lava, seen pictures of houses and beaches and bathing pools that exist only in the memories of people who, like my parents, were old enough to really understand the power slumbering fitfully beneath our feet, I’d never lost anything to the volcano I lived on. Until the most recent eruption in the district of Puna and all the national attention, I never gave the volcano much serious thought. I’ve been living on the mainland for years now, so most of the places threatened by the eruption exist, for me, as childhood memories.

When I was young, my family would sometimes spend weekends at my aunt’s mother’s home in Kapoho. Among my most cherished memories are those of swimming in the saltwater inlet beside the house, swinging from ropes tied to the trees that hung over the water, and bunking, exhausted, sunburned and still full of a manic energy, with my cousins in the loft of the house. I recall the smell of that house, salty and musty, and can picture the stone steps down to the water, the rocky bottom only far enough down for diving when the tide had risen to cover all but the highest step. I remember my mother making sandwiches on the covered patio, my uncles grilling on the grass or standing on the shore, fishing. That’s where I learned to dive, cannonball, and sleep despite a cousins’ snoring.

That house, like the rest of Kapoho, is gone. The little, sheltered inlet with its rope-tied trees are somewhere below tons of half-solidified stone, erased more thoroughly than any other natural process could’ve managed. From the most recent images I’ve found, the entire bay at Kapoho is gone, the new coastline pushing further out into the sea.

I’m lucky. I’ve lost only the site of some childhood memories. But I understand, I think, part of the shock those who’ve lost so much more must still be feeling. People whose homes, farms, or vacation rentals are now buried under tons of still-molten lava must have, like me, not really been thinking about the volcano, the past 20 or 30 years. They knew, just as I knew, back when I still lived on the slopes of Kilauea, that under their feet was a destructive power beyond human prediction or control. But who has time to think about such things, when you’re busy making a life? Bills to pay, plans to make, maybe children to raise—these are the worries that people whose homes are now gone were worrying about, before the eruption.

It’s hard to believe that a place as beautiful as Leilani Estates, Kapoho, Kalapana, or any of the other areas impacted or threatened by the recent eruptions could ever have something happen to it, just as people looking up at a clear, cloudless Kansas sky would be hard-pressed to believe that storms could ever reach down from those tranquil heights to destroy their neighborhood, just as people living in Louisiana or Florida look out over the peaceful, still waters of the Gulf and never think that the next hurricane might already be growing, just over the horizon. So too the residents in lava-impacted areas, especially those who weren’t around for the 1983 eruption that swallowed much of Kalapana, would have a hard time looking at the lush greenery and seeing the unfathomable pool of liquid destruction below.

That’s the power of human optimism, the power of hope. And while it can never stop nature’s disasters, it does allow people like me, people who are only slightly impacted, to remember fondly the times that are gone and the places that used to be. I hope that soon those who’ve lost more will be able to remember what they had without feeling its loss.