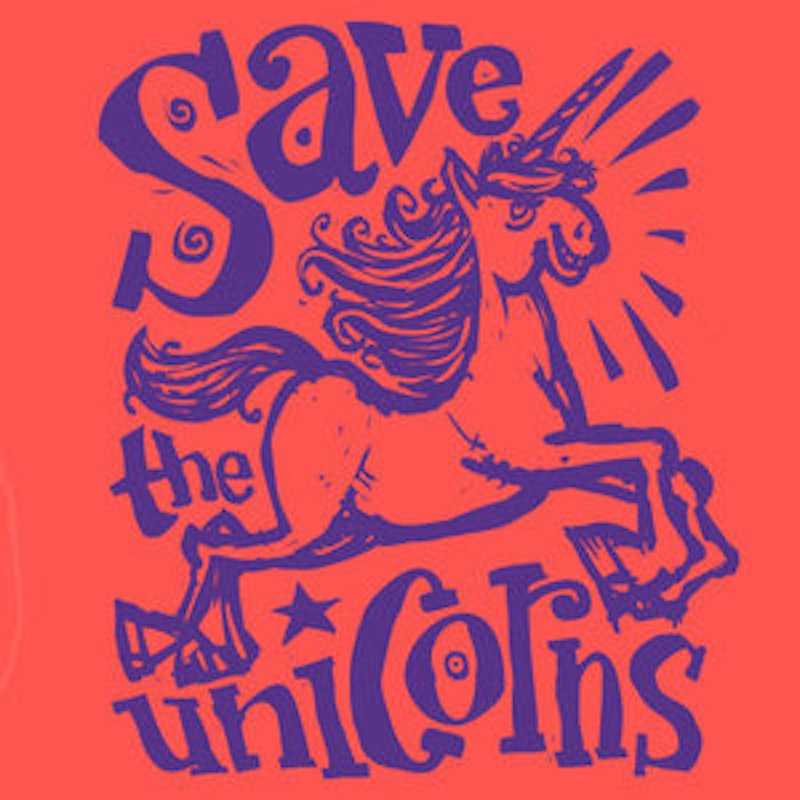 Announcer: If you had five dollars in your hand right now, what could it buy you?

Image: An out-of-focus shot of a forest clearing.

Video: A pair of white hind legs vanishes into a mist.

Announcer: Cigarettes? The Sunday paper? A tip for the hair stylist or the cab driver? A pack of batteries?

Video: Iranian children paint a rainbow-splashed "Save the Unicorns" mural in slow motion.

Announcer: What if your five dollars could serve a purpose greater than your material needs? What if, for five dollars a month, you could save a unicorn's life?

Image: A sepia-toned photograph of model/singer Natalie Imbruglia feeding carrots to a unicorn; both appear to be laughing.

Announcer: I'm Natalie Imbruglia, and my love is as pure as a unicorn is noble. They're lovely creatures, regal and intuitive, sure of foot and true of heart. Once upon a time, unicorns crowded fjords and grazed savannas freely, stoking the imaginations of children and fantasy writers everywhere. You would be riding your bike through London, to primary, and a kindly unicorn would quietly and confidently accompany you to the school gates before disappearing, accepting only wild radishes and a kiss on the nose as recompense. No longer.

Video: A baby unicorn in a Kurt Cobain shirt drinks from a baby's bottle. The unicorn's mane has been dyed a startling fuchsia color.

Announcer: Won't you save this unicorn?

Image: A unicorn skulks in a barbed-wire pen. The unicorn is scarred, and cowers as if in fear of the photographer.

Announcer: Helpless, unloved. Unable to fend for herself in a cruel, uncaring world.

Announcer: Exploited for a material worth three times the black market value of elephant ivory: their horns. Then slaughtered. Or neglected. Or, worse, released back into the wild and ostracized by un-mutilated unicorns.

Image: Corey Feldman poses before a backdrop at a Save the Unicorns charity event.

Announcer: For five dollars a month—five dollars—you can adopt a unicorn. Your five dollars provides wild radishes, medical care, a stall full of hay, and The Black Stallion in a continuous high-res loop to a unicorn to be named by you.

Announcer: In return, you'll receive un-retouched lithographs of your unicorn, friendship bracelets your unicorn weaved just for you, and theoretical justifications for and against the actual existence of unicorns argued by your unicorn, in Latin and Farsi, on scrolls, in triplicate and on the head of a pin.

Video: A chopped and screwed Rick Astley sings "Never Gonna Give You Up."

Announcer: Give. Love. Nurse a miracle. Nurture a mystery. Every call makes a difference.