Young Writers: Sometimes “No” Means “No”

Part of being a writer is getting rejected—a lot. 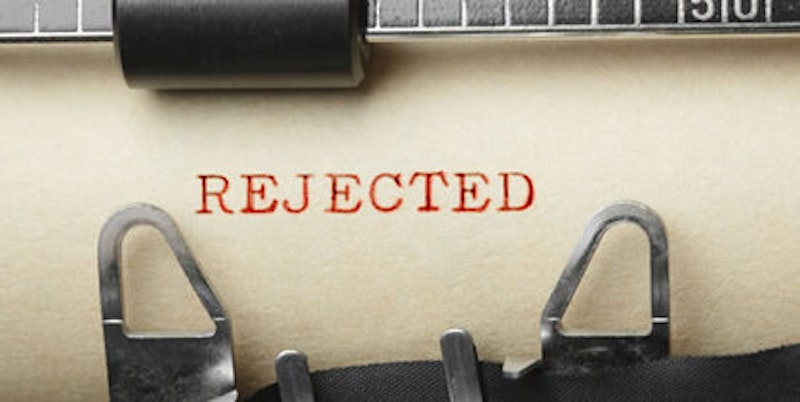 San Francisco novelist Tobias Buckell recently posted some writing advice for his new intern. Most of what he says is familiar, but that doesn't make it less reasonable. Don't expect to be a success; don't take on excessive debt if you're going to make a lot of money; do your art part time if you have to, and don't be embarrassed about that; start working on your art now if you want to work on your art. And so forth.

The last thing he said threw me, though: “I told my intern you will hear no a lot. It doesn’t mean anything other than ‘not right now with this.’ I still hear no all the time.”

Again, this is the sort of thing all older writers write to all younger writers when telling them about writing. Don't listen to rejection; follow your own instincts. And, to some degree, this makes sense. Part of being a writer is getting rejected—a lot. I don't know how many pitches the Chicago Reader rejected from me before I finally placed my first article with them, but it was more than a few.

And then, sometimes, when you get enough rejections from a certain venue, you can figure out that, for you, there is no right now. As an example, I spent around four years trying to be a poet. I wrote poetry every day and sent submissions to magazines every week. I'd generally have poems sitting in the inboxes of 20 magazines on any given day. And after four years of this (maybe more; I tend to repress it) I had two or three poems published in tiny magazines no one had ever heard of and no one cared about. In addition, I had applied to several MFA programs over several years, and they had all, without exception, rejected my sorry ass. My undergrad advisor, who I had asked for a recommendation, provided one, but was clearly skeptical about my work.

I racked up a lot of rejections. I could’ve continued on this course, just ignoring the skeptics and the haters. But eventually, and contra Buckell, you've got to figure that the rejections are telling you something. Maybe my poetry was great; maybe the poetry establishment in the United States is benighted and can't recognize genius when it's dropped upon them from a great height. Or maybe my poetry just sucked. Either way, the fact remained that no one wanted what I had to offer.

So I changed tactics. I tried various other things (writing comics, writing zines— even some drawing) before finally settling on criticism and blogging as my outlet. Which, you know, hasn't won me fame and fortune necessarily, but has garnered me at least the occasional "yes" amidst all the rejections. Sometimes it even pays a few bills.

Rejection, in other words, isn't just something to brush off when you're a writer. It's something to listen to. It's feedback. Writing's a form of communication, after all, which means it's worth paying attention to what, and how, and especially whether you're communicating, and what and how and whether people are communicating back. Not that you need to, or should, give up your dreams if you don't meet with instant success. But I wish there was more advice for young would-be authors which pointed out that there is more than one way to be writer, and that if one of them isn't working, it's okay to try another.