Goodbye to a Zine Legend

Mike McPadden jammed the Xerox machine of life, laughing all the way. 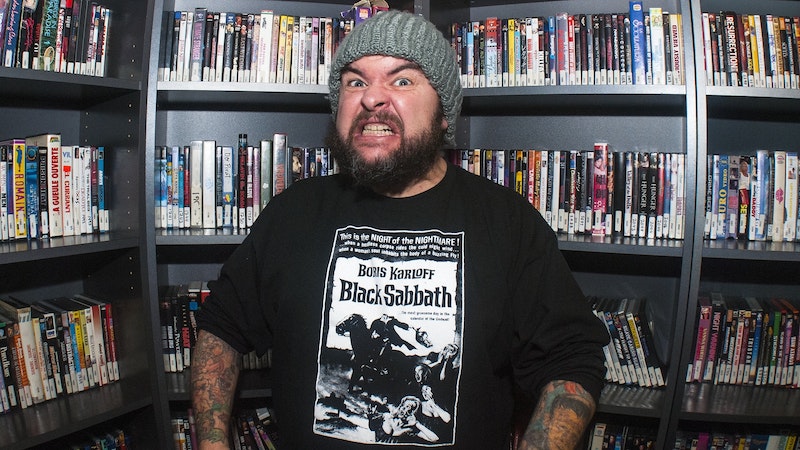 I first met Mike McPadden in Brooklyn, after he put a note under the wiper blade of my beat-up Nissan Sentra parked on First St. between 6th and 7th Aves. in the trendy, politically correct neighborhood of Park Slope. My car had a “Murtaugh” stencil on the rear bumper, advertising my baseball/punk fanzine. It was August of 1992, I think, and the note read something like this: “Dear Murtaugh guy: I see you are parked in front of my building. Please hit buzzer number 8 as I will be watching horror movies all morning and drinking Budweiser.” He’d seen me walking the night before with my girlfriend, a fellow journalist from Pittsburgh who lived around the corner from him. His parenthetical on the windshield note was vintage Selwyn Harris, which was his pen name at the time: “P.S. Who was that PIECE OF ASS you were walking with when I saw you passing Andrea Dworkin on the block? (which is not an easy task given her girth).” I wish I’d saved that note from that morning, as I would indeed ring that buzzer and proceed up the stairs of that building to meet an amazing guy who’d change the course of my “career” in more ways than one.

Word came December 16, 2020 that McPadden had died suddenly, apparently in his Chicago home. It was a Facebook obituary painting post from former NYC gadfly, musician, artist and writer Peter Landau. McPadden was 52. Details were few. Still are. He’s really the first of my contemporaries to pass away, and the way he had cleaned up his act over the past decade or so made his death a bit of a surprise. He’d also been robust on social media promoting his books and podcast appearances. But back to 1992 in his Park Slope apartment.

He was inhaling Bud tallboys at 10:30 a.m. and the movie on his VCR was Seedpeople and apparently he was reviewing it for some publication. He handed me the latest copy of his fanzine Happyland, which I’d seen before at See Hear or various storefront record shops in the East Village. The audacious title was striking (named after a notorious Bronx nightclub fire), and the illustrations were superb via Peter Bagge, Danny Hellman and Tony Millionaire. It was a bigger format than my Murtaugh zine, which was called “digest” size. Happyland was a full 8.5 by 12 “broadsheet” and contained bawdy stories of the editor’s adventures at Show World in Times Square and with various tranny hookers in Gowanus, Brooklyn, and at the double-wide trailer strip clubs of Sunset Park. It was hard to put down, as each page celebrated its own wretchedness with wicked, hilarious aplomb. I loved how he’d work in genuine Biblical references to his sleazy fanzine journalism, like the time he compared himself to the Apostle Thomas when he was doubting the gender of one of the local sex workers. There was also the legal intrigue of his famous feud with Christina Kelly of Sassy magazine in the 1990s and alleged death threats from Answer Me! publisher Jim Goad.

McPadden was a graduate of Xavier High School in Brooklyn and knew his Catholicism well. He had funny stories about Breezy Point, Brooklyn and countless tales from the streets of Bay Ridge. He went to SUNY Purchase, which gave him cred to tear down all the Parker Posey types who also went there. Every year on Oscar night, his mom would make him an Oscar-shaped meat loaf covered in golden American cheese, a tradition I believe his wife Rachel continued to the present years on Hollywood’s Big Night.

Selwyn and I became pals. He hated most other fanzines but was pleasantly perplexed by mine so we’d hang out and drink at places like Mooney’s on Flatbush Ave. or the Doray Tavern on Atlantic Ave. and proceed to hatch lame-brained publicity schemes. One of which was to abduct New York Post columnist Ray Kerrison and make him go drinking with us and acknowledge the “small underground press.” That never happened. But Selwyn insisted our next target was John Strausbaugh, a masthead star at the brash weekly New York Press. We were to barnstorm his office and make him run a pathetic dialogue piece between two Brooklyn-based fanzine editors, one a movie-obsessed sleaze freak and the other a baseball addict and both of which liked the English band GBH.

We did get an audience with Strausbaugh, whom McPadden quickly dubbed “The Marlboro Man” and instead of a dialogue piece he instead granted us access to the “First Person” column in the brilliant chaos that was New York Press in the mid-1990s. I was working as an editor/reporter at various flimsy trade magazines in Times Square at the time, so it was a gas to get in print next to writing legends such as Jessica Willis, J.T. Leroy and William Monahan.

I worked hard to sell the sports angle to owner Russ Smith, who, with the influential editor Sam Sifton, graciously took a meeting with me at Milano’s bar around the corner from the Puck Building offices of New York Press. Soon, my sports columns were dropping into the paper on a regular basis and it was indeed a fine time to be living and working as a writer in the biggest media market in the nation among all these quirky characters. And that’s not to mention all the whacked-out cartoonists and illustrators skulking about the Puck Building at the time.

Selwyn Harris, meanwhile, parlayed some of his exposure into assignments for Screw magazine, work with the Dark Brothers of porno film fame that coincided with his arrival at Larry Flynt’s Hustler magazine on the West Coast. But before he took off for L.A., he magically made appear gorgeous figurines of underground print media savvy such as Helena Harvilicz (all the way from The Comics Journal in Seattle) and Queen Itchie from upstate New York. The party continued, based at the lowbrow punk rock bar Downtown Beirut on 1st Ave. in Manhattan, with former New York Press receptionist Abby Ehmann slinging hooch and good times.

Annie Cotten had arrived from the south and was instigating bad behavior, and writer/illustrator J.D. King was taking it all in from beside the Operation Wolf video game at the rear of the facility. The jukebox was so good it should’ve been outlawed. There was a night when I went to a Peter Max presser and obtained a signed poster for some event he was hired to promote. Much later that night Selwyn and I met at Downtown Beirut and I was already buzzed on plenty of free booze from the hippie junket. We tacked the Peter Max poster to the ceiling of the bar and then proceeded to have Abby the bartender consent to a pubic hair trim with a Swiss Army knife scissor right there on the bartop. It was our version of “The Barbers of the Swill,” he said.

Another night at Mooney’s in Brooklyn, Jägermeister was having some type of promotion and they had a busty girl serving sandwiches from a tray strapped around her shoulders. As we evaporated all beers available in the packed tavern, Selwyn would scream out “Sandwich person!” every five minutes or so to reenergize with another free ham salad triangle. In between jobs, I have hazy memories of Selwyn hooking me up with some pretty good sportswriting action for the skin rag Gallery magazine (about “the girl next door”) and I was able to make rent and keep Murtaugh cranking. These are the antics you remember. To this day, I pronounce the word “costumes” as “cos-tombs” because Selwyn once interviewed Mom from Mom’s Strip Club in Sunset Park and asked her why her place was better than The Sweet Cherry down the street and the geriatric Mom said to him: “My place is better because my girls make their own cos-TOMBS!”

By the time he entered his “McBeardo” era in Chicago, social media had arrived and it was, despite geographical distances, easier to stay in touch. Like most of the few native New Yorkers I met in the city, McPadden taught me a lot about the lifestyle and attitudes of 718 and 212 area code dwellers. I can assume he’s in a very good area code now, with an aisle seat, given how behind his brash and sometimes garish exterior, he was a creative force with a kind heart, and it was truly a pleasure to know him.