Since many pigments were toxic, paint making could be dangerous. 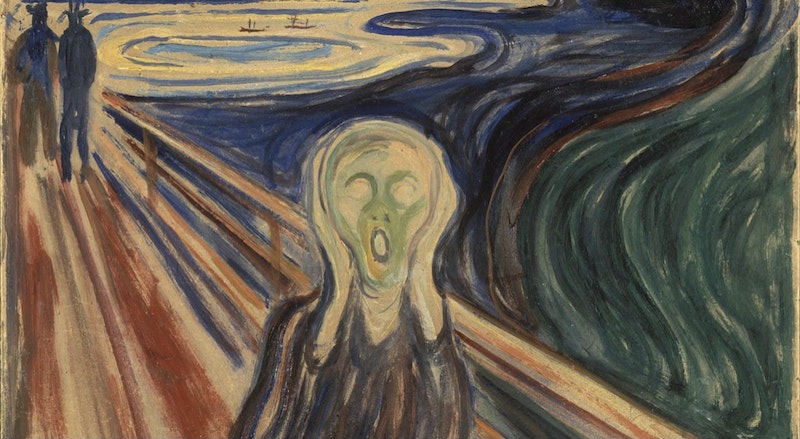 The Scream is fading. Edvard Munch’s 1893 painting depicting a shrieking, agonized face is slowly losing its vibrancy. Yellows are fading to white and tiny pieces of paint are flaking away. It’s also happening with Van Gogh’s Field of Irises Near Arles. The once vivid chrome yellow has faded to a dullish brown. Another Van Gogh piece, The Bedroom, originally featured soft purple walls. The red pigment has broken down and the walls are now blue.

Van Gogh and Munch lived during a time of revolutionary change in the art world. Progress in the chemical industry introduced pre-made paints to the marketplace. Factories tested paints for vibrancy but not longevity. Many paints contained impurities and the pigments were unstable. Exposure to humidity emitted in the breath of museum visitors caused artworks to slowly degrade.

Prior to the 1880s, most artists made their own paints. The process was tedious, time consuming and paint had to be made from scratch each day. Artists sought out rare pigments and fine oils. Many worked for years as apprentices learning how to properly grind pigments. They became experts in particle size, hue, drying time, permanence and light fastness. They kept secret “cookbooks” indicating the ratio of pigment to vehicle and whether a siccative (drying agent) or extender (filler) was needed.

The formula for making paint involves mixing pigment, vehicle (binder) and stabilizer. The vehicle holds the pigment particles together and secures the paint to the surface to which it’s applied. In ancient times, pigment was mixed with spit or fat. Oil paint uses linseed oil or walnut oil as a vehicle. For watercolor, gum arabic, honey or glycerin is used. A stabilizer, such as beeswax, is often added to oil paint to increase drying time or keep the pigment from clumping. Extenders are added to make the paint last longer. These include less expensive white pigments that don’t affect color.

Prior to the Renaissance, egg tempera was the most popular vehicle. Artists ground pigment to a fine powder and mixed it with egg yolk. Because the egg dried fast, artists had to paint quickly. Egg ultimately degraded causing colors to fade over time. In the 15th century, egg was replaced by linseed and walnut oil as a vehicle. Oil paints dry slower and have a greater luminosity than egg tempera. The first use of oil paint is attributed to the Flemish Van Eyck brothers, Jan and Hubert. The oil paint gave them a wider color palette and allowed them to focus on realism and naturalistic subjects.

Pigments derive from many sources. Some come from minerals (rock and dirt), others from organic matter (bones, insects, plants). Ocher colors (light yellow to brownish red) originated in clay or soil. Indian yellow was obtained from cow urine. Sepia (rich brown) came from the sac of a cuttlefish. Ivory black came from carbonized animal bones while peach black came from baked peach seeds. A bright red pigment called “Dragon’s Blood” was made from gum resin found in a south Asian tree. An expensive vermilion pigment (orange-red) came from a mineral ore called cinnabar. The most prized red was called cochineal. It came from the ground shell of a tiny beetle found in South America. Indigo (dark blue) was extracted from tropical plant leaves while the most precious and valuable blue called ultramarine came from lapis lazuli, a rare rock found in Afghanistan.

Pigments that included cobalt or cadmium achieved a stained glass effect when ground to a fine powder. Pigments containing chromium oxide such as viridian became dull if ground too much. Specialized pigments were scarce and expensive. This led artists to specify in their contracts how much ultramarine or cochineal would be used in a painting.

Since many pigments were toxic, paint making could be dangerous. White lead, the favorite color of Vermeer, caused kidney and neurological damage. Scheele’s green, created by a Swiss chemist in the early-1800s, had an arsenic base. A dye containing the pigment was used in the wallpaper in Napoleon’s home. As the paper peeled away, arsenic was released into the air. Historians have speculated that Napoleon may have died of arsenic poisoning, not stomach cancer.

Uranium yellow was used to glaze pottery and glass during the time of Christ. The paint yields a bright, transparent glow due to radioactive particles within the pigment. When artists rolled their brush between their lips to create a fine point, they ingested radioactive uranium. Today, the pigment is derived from depleted uranium oxide.

In 2015, the European Union banned the sale of cadmium paints, a heavy metal that causes cancer and calcium depletion in bones. Blame was placed on artists who washed brushes in the sink polluting the water supply. The ban was lifted a year later when a cadmium-free alternative was found.

Over time, artists learned the pigments that blended well versus those that clashed. Complex techniques arose such as underpainting and glazing to maximize color range and compatibility. Prior to the 19th century, handmade paints were stored in pig bladder tubes fastened by a clout nail to prevent drying and oxidation. In 1841, American painterJohn Goffe Rand invented a collapsible zinc tube making bladder tubes obsolete.

During the period of Louis XIV (1643–1715), the nobility took up painting though they considered it beneath them to make paint. An industry arose called Amateur (“lover of art”) to create and supply paints for nobles. In the early-1700s, a German chemist experimenting with iron oxidation accidentally manufactured the first synthetic pigment, Prussian Blue. In the early-1800s, the isolation of zinc led to a white zinc-oxide paint that replacing the hazardous white lead. Alizarin, a bluish crimson found in the roots of the madder plant, became the most popular new pigment of the 19th century.

As synthetic pigments were introduced, paint costs decreased. The Industrial Revolution led to the creation of bright paints like cadmium red and chrome yellow. In 1890, the creation of the first aniline dye (mauve) led to the European mauve decade.

The availability of factory paints allowed painters of lower economic brackets to become working artists. It also enabled artists to work on larger canvasses and experiment with a wider color palette. Since many of the new paints were tainted by impurities, the longevity of the work suffered. Had Munch mixed his own cadmium sulphide yellow instead of buying a tube of paint that contained chlorides, The Scream would be more vibrant today.

Van Gogh was one of the few artists of his time aware of the pitfalls of synthetic pigments. In an 1888 letter to his brother Theo he wrote, “I’ve just checked and all the colors that impressionism made favorable are unstable… Time will only soften them too much.” Paintings became ephemeral like the natural world they depicted. As Van Gogh wrote in another letter, “The paintings all fade like flowers.”