Ghosts of the 40s

Revisiting the area around the Park Avenue viaduct. 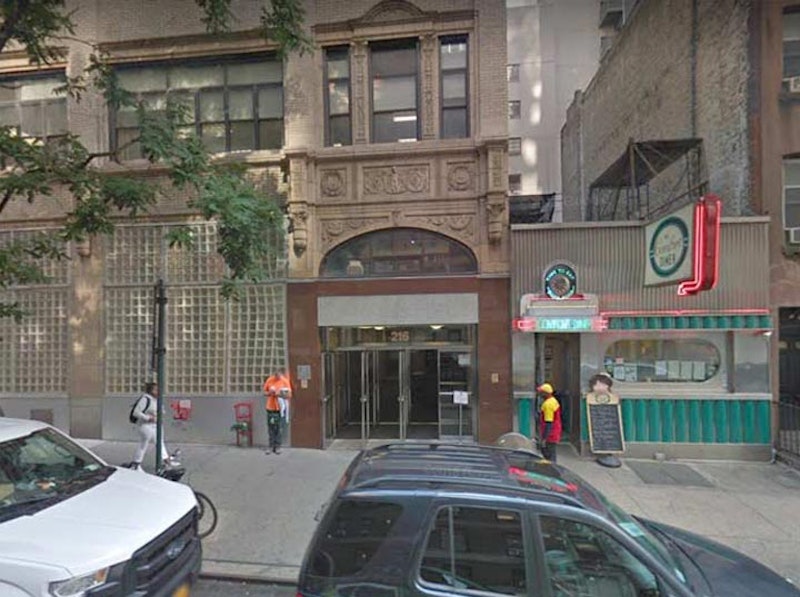 In the spring of 2018, I was working in a building from midnight to eight a.m. I’d last worked there 30 years ago. The company I worked for then, Photo-Lettering, went out of business 25 years ago. The people I worked with then are old or dead. I’m a ghost. The experience has been surreal as I haven’t had so much as an evening shift since early 1992, and at Photo-Lettering I was also on the second shift: my hours varied from five p.m. to three a.m. or seven p.m. to five a.m.—however, there was frequent overtime and sometimes I found myself fighting the morning rush going home.

I enjoyed working for what was the city’s biggest type shop, but the evening hours stunted my social life. I’m not exactly a hermit but because of it, especially Friday nights, I didn’t get out much. Midnight-to eight, however, is a different ballgame: all connections to a “normal” schedule are dropped.

Since beginning Forgotten NY in 1998, I have “heightened awareness” of the streets where I live and work—their peculiarities, their histories. Between 1982 and 1988, while curious about the city, I didn’t have an outlet to express it and wasn’t looking as diligently. In those years I didn’t wander the streets on my “lunch hour” which was between 12 and 2pm. The city was more dangerous in those days. (Is the danger coming back again?) In 2018 I got to work around 11:30 and took more notice of what I saw in the walk from Grand Central Terminal to 216 E. 45th.

#216 was the building where I worked in the 1980s and find myself in again. But in the 1980s, I used the freight entrance, which is out of the picture on the left. Where you see the glass blocks was the picture window display for Photo-Lettering, which had been abandoned by the time I got there.

I never (or rarely) ate at the Comfort Diner—in the 1980s called the Jay Dee Coffee Shop—while working at Photo-Lettering, though at 214, Jay Dee was right next to PL at 216. It had “normal” hours and was closed when I went to lunch. I never thought to try it before work, though, and I can’t remember if it had any of those classic diner trappings back then. These may be add-ons, because Jay Dee doesn’t show up on any of my NYC diner sources. It appears to be a classic diner on the exterior—possibly a Kullman? I finally wandered in for breakfast at eight a.m. one morning after work. The pancakes were good, the service somewhat indifferent. I wasn’t allowed to have my preference, a booth. 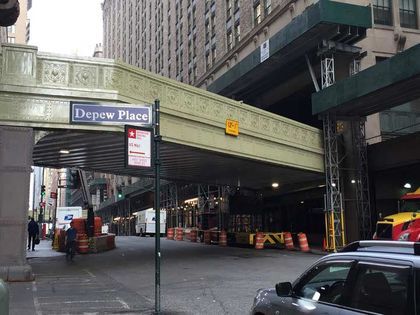 The Park Avenue Viaduct spans E. 45th St. between Vanderbilt and Lexington Aves., snaking around the Helmsley Building until both of its lanes meet at Park Ave. and E. 46th St. Here, Depew Pl., now reduced to a dead end behind the 1909 Grand Central Post Office, runs by the viaduct.

When I attend NYC’s “Summerstreets” program, which opens up Lafayette St., 4th Ave. and Park Ave. up to bicycles and pedestrians for a few Saturdays in August, the highlight is the opportunity to walk the Park Ave. Viaduct, which opened in two pieces from E. 40th to E. 46th Sts. in 1919 and 1928 surrounding Grand Central Terminal and later the Metropolitan Life (formerly Pan Am) Building. It has always been designed expressly for auto traffic and doesn’t have shoulders or sidewalks of any sort—hence its oddities, architecture and statuary are largely mysteries to all but the motorists and cabbies who speed past them every day. 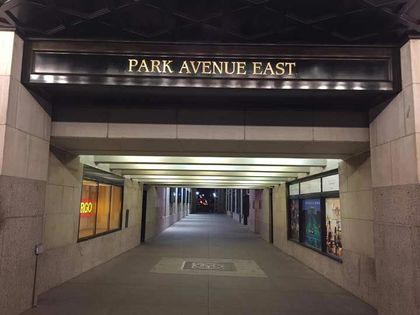 Although there’s no surface Park Ave. between E. 45th and 46th Sts., pedestrian traffic to and from Park Ave. can proceed via two passageways beneath the Helmsley Building, constructed as the New York Central Building [Warren and Wetmore, arch.] in 1929. Just two years later it was the site of a mob hit as Lucky Luciano and Vito Genovese-hired assassins rubbed out “boss of all bosses” Salvatore Maranzano. It acquired the Helmsley name after Helmsley-Spear, owned by Harry Helmsley and his wife “Queen of Mean” Leona, bought the building in the 1980s. 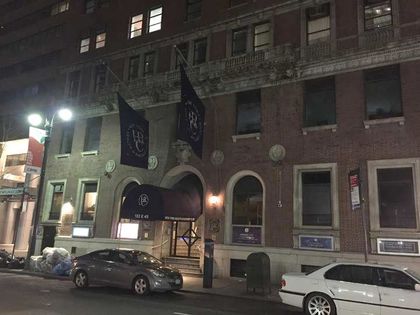 In the 1980s, when heading to work, I noted this large, handsome building on the south side of E. 45th at #132. Then as now, it’s home to the NY Health and Racquet Club (though I never went in; I have not seen the inside of a gym since high school). In 1915 it was built as The Central Club for Nurses and YMCA, and by 1962 it was the Morgan Hall YMCA. The Y sold the building in 1974. 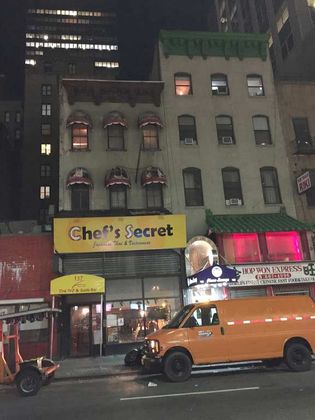 Here’s a pair of holdover brick buildings on the north side of E. 45th, at #137 and #139. Both buildings have Asian restaurants on the ground floor, while #139 has a piano bar, Uncle Charlie’s, on the second floor. But as I passed the building at about midnight I wondered what was going on in those dimly lit rooms on the upper floors, behind those tattered awnings of #137.

#139 was once home to the Press Box Steak House, one of a number of steakhouses in the area that catered to both the news industry and the showbiz crowd; the vanished #151, next door, was another, Danny’s Hideaway. E. 45th came to be known as Steak Row in its heyday beginning in the 1920s. 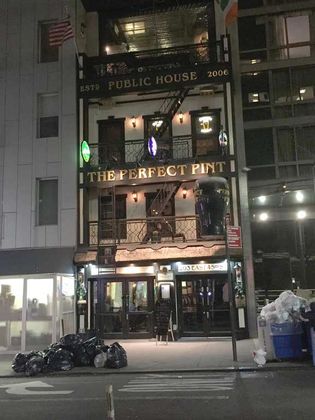 One of the more famed of the restaurants of “Steak Row” was the Pen & Pencil, where Hunsecker/Winchell-esque columnist (though nicer and more journalistic) Earl Wilson once held court. His New York Post columns were punctuated by a daily photo of a busty film or Broadway diva and his tagline, “That’s Earl, brother.”

Proprietor John Bruno’s Pen & Pencil expanded from 203 into 205 next door, the premises of a former soda fountain. Bruno decorated the place with murals by Milton Marx of famous writers, from Lord Byron on down, and included two famed newspaper publishers, Joseph Medill Patterson and William Randolph Hearst.

The Pen & Pencil closed in the 1990s and the premises were home to The Perfect Pint by 2006. Note the typefont the signs were set in. It’s known as Benguiat (pronounced “BENG-gat”) and was invented by Ed Benguiat, a jazz percussionist turned type designer who worked at Photo-Lettering, where I worked. 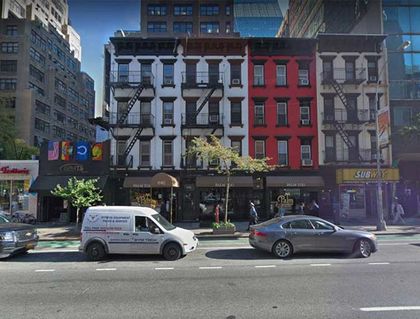 The original Palm Restaurant was a steakhouse featuring Northern Italian cuisine that opened in a former funeral home in 1926 by Italian immigrants Pio Bozzi and John Ganzi, who hailed from La Parma, hence the name. The original location on the west side of 2nd Ave. south of E. 45th closed, but its first offshoot, Palm Too, still holds forth across the street.

With a limited budget, I’ve never been in either Palm. However, I did eat “lunch” here once a week, at around two a.m., in the building on the left. It was the longtime home of an all-night Blimpie’s, which had moved out by 2009. I’d stop in for years now and then after I had left Photo-Lettering.