Get Your Fresh Copies in Astoria

Dragging the streets in Queens where the first photocopy was made in 1938. 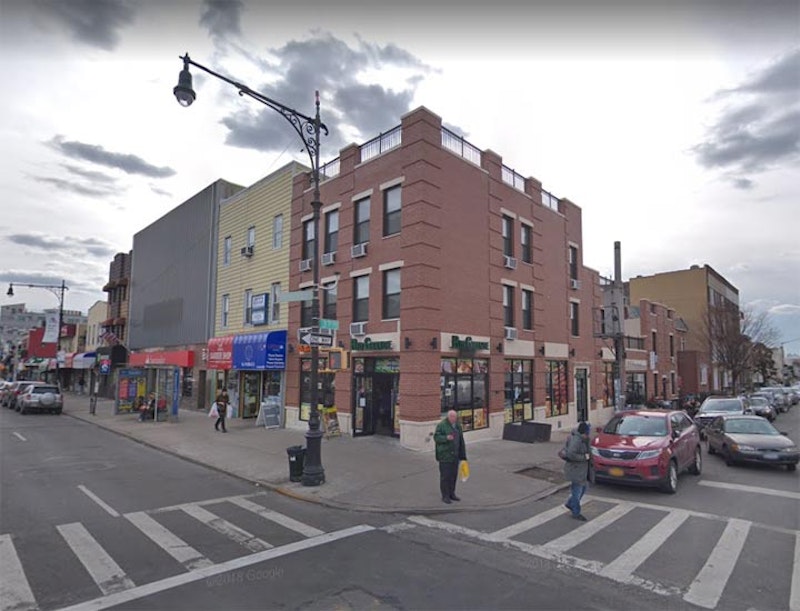 History can be found in the most mundane of settings. Take this three-story walkup on the corner of Broadway and 37th St. in Astoria, Queens, for example.

The building has presented a varied appearance over the years. When constructed, it was brick-faced, but in the mid-20th Century it acquired aluminum siding. Then, in 2016, it received a new set of brick-facing. The lamppost on the corner is a modern-day copy of the long-armed “Corvingtons” that first appeared in the early-20th Century.

The side entrance is marked “32-05 37th Street” and it leads upstairs to the place where xerography, aka photoelectric copying, known today universally as the Xerox machine, was invented. “Xerox” has come to mean all copiers, as “Coke” in some parts means all flavored carbonated beverages, even though both are registered trademarked brands.

Inventor Chester Carlson (1906-1968) was born in Seattle, Washington and his Swedish immigrant family kicked around the West for a few years, even residing in Mexico, before settling in San Bernardino, CA; Carlson attended the California Institute of Technology and received a B.A. in physics in 1930. He accepted a job as a research engineer at Bell Labs in Manhattan, a building on West and Bethune Sts. in Greenwich Village that is today an artists’ colony known as Westbeth. Carlson requested and got a transfer to the company’s patent office because he was interested in the new technology coming into its own, despite the Depression, such as television.

Carlson had been interested in the graphic arts from childhood and always lamented that other than carbon paper, stencil duplicators (or mimeographs) or re-typing, there was no good way to quickly produce multiple legible copies of documents. He realized that the production of such copies would involve the photographic process. Renting an apartment in Jackson Heights, he began to experiment with silver halide, which enables light to initiate chemical changes, and experimented with photoconductivity, the interaction of electricity with light. In October 1938 he enlisted help in the person of German-born Otto Kornei who had fled his homeland during the Nazi regime. The partners rented a back room at 32-05 37th St. and made a breakthrough on October 22nd, 1938, when the first photocopy of a sheet of paper, inscribed “10-22-38 Astoria,” was made.

Carlson obtained a patent in 1940, one of 28 during his life, shopped around models of the photocopier to various companies including IBM, but the USA was at war and new commercial inventions weren’t given priority by most of the places he contacted. Finally he signed with Battelle Development Corporation, a subsidiary formed by Battelle Memorial Institute for the specific purpose of sponsoring new inventions, in October 1944, and was able to receive the support of a major corporation to refine his invention to make it commercially viable. The Haloid Company partnered with Battelle and Carlson, and the first sale of the Xerox copier, as Haloid called it, was made in 1950. The first commercially successful Xerox machine, the Xerox 914, appeared in 1959; Haloid became the Xerox Corporation.

By the 1960s, Carlson was worth over $50 million, making him one of the USA’s wealthiest, and he became a dedicated philanthropist, donating much to the NAACP and various organizations championing Zen Buddhism. He died from a heart attack in 1968.

“To know Chester Carlson was to like him, to love him, and to respect him. He was generally known as the inventor of xerography, and although it was an extraordinary achievement in the technological and scientific field, I respected him more as a man of exceptional moral stature and as a humanist.” So said United Nations Secretary-General U Thant at Carlson’s Xerox Corp. memorial in Rochester, NY. 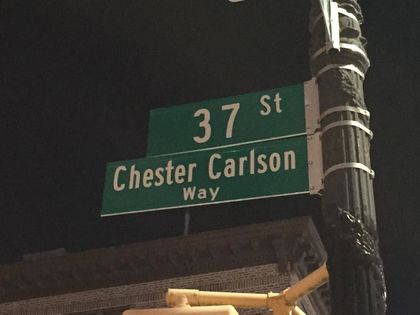 In October 2016, the Department of Transportation paid homage to the Father of Xerography with a street sign on the corner outside the building where he became the Father of Xerography. “The technology revolution started right here in Queens, when Chester Carlson made the first modern photocopy right here in Astoria,” said District 22 Councilmember Costa Constantinides during the co-naming ceremony. “Astoria may have changed in the 81 years since it was Xeroxed into history, but today we paid permanent tribute to the transformation that started right here in western Queens.”