What’s worse: no punchline or a predictable one? 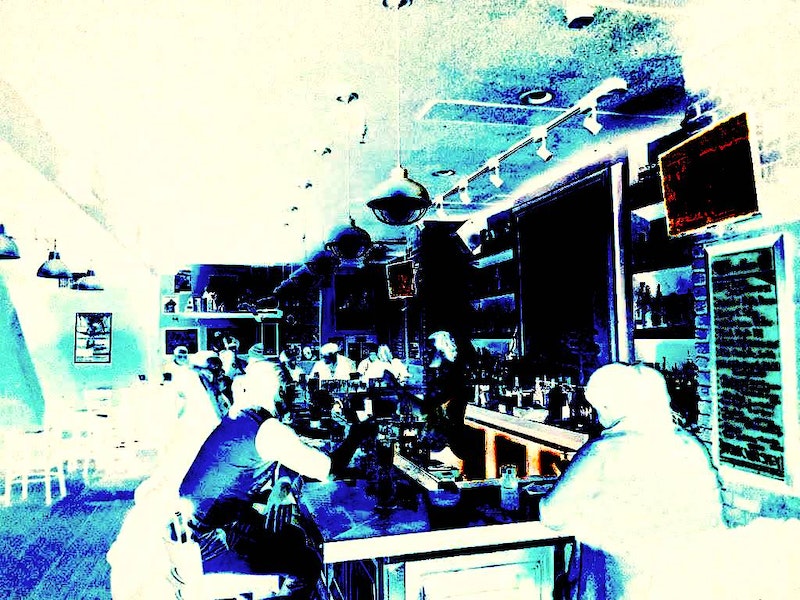 The pavement feels like it’s melting underneath me as I run, the full brunt of the unsheathed sun burning freckles into my pale skin like a sadist with a lit cigarette. The heat’s punishing and my left gastrocnemius is sore, but running is one of two ways I know to get rid of the summertime blues. The other way is anti-depressant medication, which I just started taking again. At the risk of oversharing, I try to be as open as possible about taking anti-depressants, because 1) talking casually about mental health problems helps destigmatize them, and 2) people are nicer to you if they think you might kill yourself.

A few days back on meds gives me enough energy and mental stability to go to an open mic at St. Mary’s, a little Jamaican spot on 25th St.. Khairy Creek has run an upstairs Monday mic there for years called Above the Bar, and I’d say it’s one of the best attended open mics in Baltimore, the prime Monday destination for comedians since the Sidebar closed.

Speaking of the Sidebar, I see Mark Joyner (aka Dark Mark), former host of the Sidebar’s open mic and one of my favorite Baltimore comedians. He asks if I know of any other Monday mics happening, but I’m the wrong person, since I barely perform these days. Mark goes on third and destroys with a bit about the late Nichelle Nichols and her ambiguous relationship with Martin Luther King. She just died, so I assume it’s a new bit, making it all the more impressive.

I go up shortly after. I don’t record it on my phone, saving myself agonizing replays of the jokes that bombed. The crowd, while modest, is nice enough. Some stuff is connecting, some stuff not. I tend to go a little darker in subject matter than most, and it makes sense that there are people who don’t want to laugh about things like suicide, French incest laws (or lack thereof) or even the recent sale of Hitler’s watch, so I appreciate whatever positive reactions I get.

The next night I’m driving out to Timonium. I pass the busted old Pepsi sign on I-83, and it occurs to me that it marks the entrance to the city much the same way the giant Amoco sign on Clayton Rd. announces the western entrance to my hometown of St. Louis, mirror images in a lifetime of crossing the membrane between county and city, each sign a monument to the smoggy osmosis of that divide. The dissonance between city and suburbs is only amplified in the comedy scene, which, like everything else, functions as a proxy for asinine culture wars: woke city snowflakes vs. the suburban Roganites. I wish everyone could just get along, though the antagonism between the two does have a way of enlivening even the most depressing, unfunny open mics. Like Tuesdays at Wit’s End, where comedy goes to die.

I approach any open mic like Robert De Niro in Brazil: fly in quick, do your bit, then fly out just as quickly. But that never works at Wit’s End, whose Tuesday and Thursday mics always have a long list of comics before the doors even open. Wit’s End is connected to Magooby’s Joke House, the main game in town for both up and coming and traveling comics, an office park comedy club with a heavy “Margaritas at the Mall” vibe. Fittingly, the subject matter of the night leans heavily toward suicide, with the consensus that most of the comics in the room should probably get it over with. But the laughs are in short supply. With only a couple of exceptions, each comic bombs their six minutes. I watch fully aware of what’s waiting for me, and still stay for some reason.

Returning from the bathroom, I see the bartender and another comic in the hallway outside the bar, covering their faces in embarrassment. I wonder how bad it must be. It turns out to be a woman, the first female comic of the evening, which is sadly not unusual at open mics. I feel bad for her. She’s a fish out of water, getting absolutely zero laughs. I also feel bad because it seems like she doesn’t understand what jokes are. Her set consists solely of talking about how racist and sexist the other comedians’ jokes are (true), how racist and sexist John Hughes movies are (also true), and how other comedians treat her like she’s not even there (welcome to the club, lady). Say what you want about John Hughes, but he understood that a setup needs a punchline, which is conspicuously missing here. I mostly feel bad for her because it doesn’t seem like she’s having any fun.

I don’t do much better, but have fun. My Hitler’s watch joke sucks so bad that someone guesses the punchline before I even get to it. (What’s worse: no punchline or a predictable one?) I finish my six and go outside. The sun is down and the temperature has dropped. I talk to another comic about how mics at Wits are for fucking around and having fun, which is a nice thing to tell yourself after bombing a set. I mean that sincerely. The upside to doing comedy without professional aspirations is that it’s all basically about fucking around and having fun.

I pass the Pepsi sign again on my way back to Baltimore, and strangely, I’m comforted seeing it tower over me as I dodge potholes. It’s ugly, broken, hollowed out, but still standing, like so many veteran open mikers.