He fell to a knee. 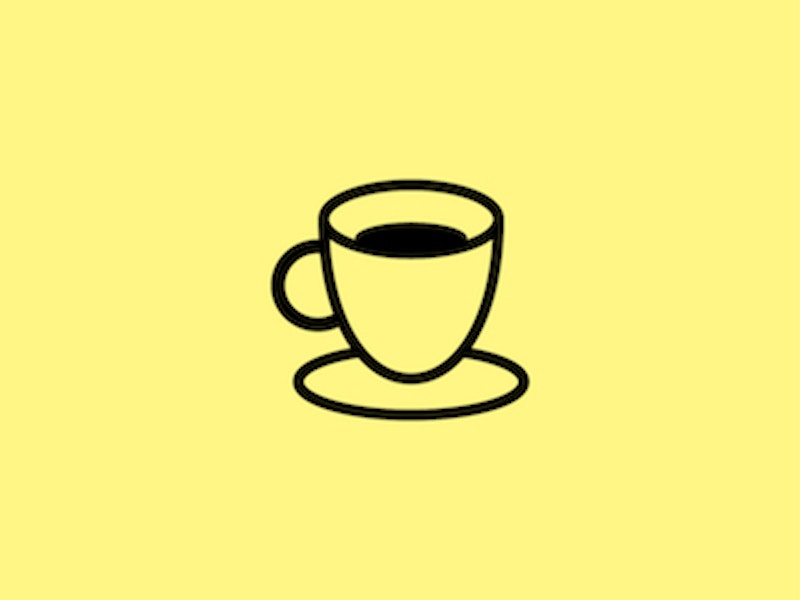 "How do you do! Yes, you may. I'm looking for a watercolor set, something for my niece, a beginner, a child of eight."

"I don't have anything for you," he shrugged.

The middle-aged woman, in a tailored tweed suit, hem below the knee, adjusted her spectacles and said, "Why, how can you say that? Look here," as she took two brisk steps to a handsome display of watercolor kits ranging from novice to deluxe, gleaming under track lighting. She pointed and said, "Sir! You are mistaken," picked up a small set, opened it, and nose raised, examined.

"I beg your pardon!"

"You heard me. Get out of my store! What part of that don'tcha understand, you hoo-er?"

Mrs. Madeleine Pflug snapped shut the watercolor set, gently returned it to the display, faced Manny Weiss and said, with tightly controlled fury, "Well! I have never! In all my days!"

Knuckles on hips, Manny leaned forward and shot back, "All your days? Lady, I don't have the time to listen to the life story of an old hoo-er. Now, get out! Out!" His black mustache bristled above twisted lips and bared teeth.

Standing in the middle of the narrow aisle, he was blocking her retreat, forcing her, face flushed, to squeeze past him, her behind brushing against his crotch. Bells jingled merrily as she opened the door to escape Jolly Knickerbocker's Art Supplies and Framing. The pneumatic system frustrated her effort to give the door a slam.

The store now empty, Manny sat behind the cash register, hands folded on his paunch, and snorted. He sat still for nearly a minute, Muzak piping in an orchestration of Rodgers & Hammerstein's "My Favorite Things."

"Man the register, I'm gonna get a cup of coffee."

Manny exited via the rear door, entering the building's lobby of black marble walls, an elevator bank, businessmen and secretaries and delivery boys scurrying to and fro. At the newsstand he bought the Daily News, then crossed the lobby to the coffee shop, settled at the counter. A little after three, it was quiet, the lull before closing time. "Hiya, Mr. Weiss! Your usual?" Her young head bobbled.

"Please, darlin'." She poured a cup of coffee before trotting off to toast his bagel. Watching her backside shimmy, he thought, "Dumb bunny, probably spreads 'em for every Tom, Dick and Harry," while snapping open the tabloid, turning to the funny pages, as he cautiously sipped hot black coffee. His stomach felt an acute stab. He knew the doctor's warnings, and even if he forgot, his ulcer reminded him. Still, he craved a cup.

"Thanks, darlin'. Be a good girl and gimme a refill, wouldja?"

In the shop Rex rang up a sale, pushed the drawer almost closed. The next sale he didn't ring up, returned $2.78 in change, pocketed the 50. After work the loot would buy rounds at The Skyline Bar, his watering hole high atop midtown, sprawling the top floor of Essex West, wall-to-wall windows onto the world.

Around four, Manny returned. Rex retired to the grotto, to his current assignment: double-matting and framing a large print of a 19th-century battleship scene. With a ballpoint, Rex scrawled a periscope and a shark's fin into the turbulent waters. He often doctored prints, considered it his signature. No one had ever caught on. On his worktable was a framed photo of a Scarsdale towhead, one of eight photos brought in by the boy's dad. The man got seven framed pictures, failed to realize he was one short. Rex told Manny, "It's my cousin Elmer." Chomping on a tuna sandwich and potato chips, his fingers greasy, Rex got to work.

Rex had no family to speak of. Still young, he was a bachelor, had fled the smoky pines of Wolverton, Tennessee, for the bright lights, leaving behind trailer-trash life, his boozehound ma, and a delinquent dad. One of Rex's fondest toddler memories was of deliberately slamming his father's fingers in the car door. He got a whuppin' but it was worth it, still gave him a chuckle, made for a good anecdote.

At 26, Rex sported a full set of dentures, the result of decades of swilling Coca-Cola, starting with his baby bottle. "C'mon, baby, drink your juice. That's a good boy, gonna make ya big an' strong." He was runty, scrawny, a little bow-legged, rickety, pockmarked, balding, nose in an early stage of bulbous, hardly a portrait of health. Yet he possessed a spark, a charm, and devilish glint.

The doorbells jingling, a short swarthy youth entered Jolly Knickerbocker's. Manny was on him in a blink, loomed over him every step, ignoring the teen's annoyed glances, until the kid left in a huff. "Punk," Manny shouted after him as the ulcer gave his gut a punch, causing him to wince, a hand on a glass display case to steady himself, just as DeWitt Haffington III waltzed in. "Oh my God!" Manny had read about the Haffingtons since he was a kid in the Bronx. Standing bolt upright, he licked his lips and rubbed his palms, using all his might to keep from rushing up to the canned corn heir. "Play it cool, boy, real cool. This could be big..." He'd never seen a Haffington in real life. It was bracing, like jumping from a B&W snapshot to a Technicolor movie.

Sidling up, Manny purred, "Mr. Haffington! How may I assist?" Slightly bowed, hands clasped, Manny was one smidgen away from scraping the bottom of one shoe on the floor, then the other.

"Oh no, of course not, Mr. Haffington, sir. But I've read all about you, of course, of course."

"Can direct me to your watercolor sets, my good fellow?"

"No, sadly, alas, Mr. Haffington. Back-ordered, should be in any day! Possibly Monday," Manny babbled as DeWitt Haffington III turned to the door, exited, waving a royal ta-ta.

Facing the door, fists tight as clams, about chest high, Manny muttered between clenched teeth, "Damn you, you filthy piece of garbage... Damn you and all of you stinkin' rotten Park Avenue penthouse bastids... Damn you and your filthy hoo-er of a wife..." He doubled over. "Ohhh... I shouldn't have had that refill..."

Seeing stars of pain, Manny mumbled down the stairs, "Rex... not feeling so hot... take over, wouldja?" Cold sweat on his scrunched brow, Manny slouched into his topcoat and short-brim fedora, was on Madison Avenue before Rex had a chance to hop upstairs. Manny Weiss trudged toward Grand Central, each step an agony, the Friday rush-hour crowd a torrent. Someone slammed into him, cursing Manny before disappearing into the rushing onslaught. Manny loosened his tie, unbuttoned the top button.

Ashen, hit with a blinding round of sharp pain, Manny staggered to the side of a brick building, rested a shoulder against it, held his stomach with both hands and groaned, "Oh, God..." He crumpled to a knee. From the crowd a man ran up to him, "Hey, mister! You okay? Hey, someone! Call a doctor! Easy pal, hang on, look me in the eye... Hey! Someone call an ambulance! Right now!"

Rex was on the phone, "Rob Roy! Meet me at The Skyline, round up the gang!" A half-hour later, the half-dozen were on their way to well-oiled, occupying a table as dusk settled, surrounded by a panorama of city lights and stars twinkling in an indigo sea, Rex holding court. They washed down bowls of Pepperidge Farm goldfish crackers with Martinis. Packs of Vantages and Kents sat on the tabletop, someone occasionally grabbing a smoke as Pierre, a dapper Canadian in a tuxedo, played a baby-grand piano in a dark corner of the dark bar. Rex called him The Frenchman and tipped him generously with ill-gotten cash, requesting "Send in the Clowns" over and over. The gang routinely closed the bar with that, their table the last patrons, silent, solemn and blurry throughout Sondheim's ode to loss.

"The Frenchman's got it, and he's got it bad," Rex informed Emily McGraw, a newbie to the set, Rob's office co-worker. "He's hung up on the Ice Queen," Rex continued, nodding toward a statuesque blonde, the hostess, about 35, glorious youth past its peak, but a decade junior to The Frenchman. Her blue eyes were cold as a lock. She and Pierre were a pair of a sort, but The Frenchman was keenly aware that those icy eyes strayed. One day she'd fly the coop. When, not if.

Emily had moved to town a month ago, from a suburb of Dayton, Ohio. Rex dubbed her Buckeye McGraw. She couldn't explain why, but that gave her a glow. And she was dazzled by his perfect teeth and knowledge of punk rock. Sure, Emily had seen The Ramones. Once, at college. She even wrote an enthusiastic article about the concert for the school paper. But Rex had seen them countless times, at CBGB. And Rex had his ear to the ground for the up-and-coming bands: The Cramps, Nervus Rex, The Feelies, Mars. Meanwhile, Rex saw great potential in Emily. The Earth Shoes and Joan Baez hair needed to go, to be replaced by, say, stilettos and a bleached beehive. Emily appealed to the Henry Higgins in him. Where others might see a plain Jane, he saw a challenge, a diamond in the rough.

On the street again, spying a stretch of cars parked nose-to-tail on the side street, Rex addressed his entourage, "Watch me make a bundle for some car-repair shops!" He tossed his cigarette to the gutter, double-checked to make sure the coast was clear, and in a flash he leapt onto an Oldsmobile's trunk. With cleated heels, he dashed across all of them, denting and scraping trunks, roofs, hoods. At the last one, Rex jumped off, somersaulted thrice in the gang's direction, flipped onto his palms, and hand-walked the rest of the way back to them.

In her entire 23 years Emily McGraw had never seen anything so crazy. He's insane! She was in love.