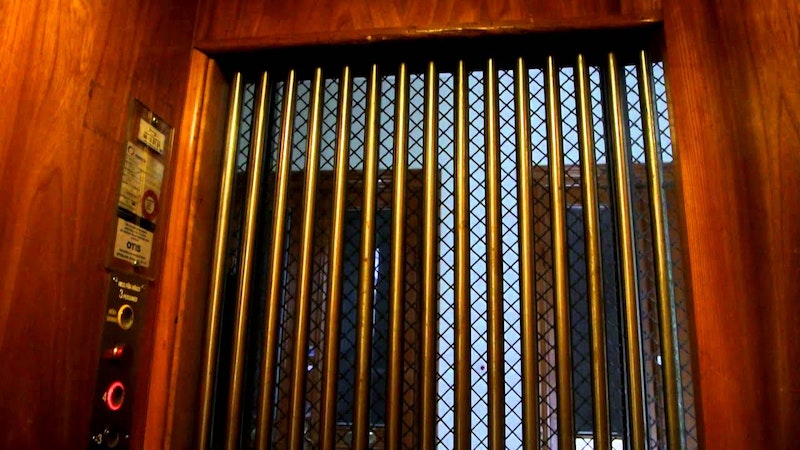 So went the theory of my college friend Tom. He explained that “the coil” behind the call button would heat up, and this would trigger a series of events that would impact the entire guts of the elevator and shaft mechanics, ultimately resulting in the called car arriving prior to the car just to this car’s left (or right) called at exactly the same moment. The next time you’re waiting in front of a two-car stand-up, try it.  You may, like us, argue that you need to be starting both cars from the same place. This would require two additional members of your research team: frat, to either find the cars at one floor, hold them there, start them together, or somehow put the two entities into a fair starting position.

Next, the signalers need to do their part. We learned that it’s not enough to push the call button a few times in succession—we’re talking about a constant, repeated banging of the call button, as fast as possible. No half-assed effort is going to heat the coil—this is a concentrated, coordinated process, importantly made with the index finger of the dominant hand of the signaler. Any other method won’t cut it.

The converse argument, that a call button pressed just once, and left alone, would allow the Otis mechanisms to concentrate on that side of the elevator shaft was dismissed, out of hand. Too catholic, I suppose. I had a secondary, almost unrelated addition to make to these conversations and experiments. When I was young, I had occasion to get on and off elevators frequently with my mother. She taught me the now forgotten etiquette of elevator entries and exits. When an elevator arrived for us to board, I learned, it was up to me, as the gentleman, to board the car first. She explained that there could be a mechanical issue, and that elevator cars were know to slip, to sink a foot or two below the height of the permanent floor outside the car. It was up to the gentleman to confirm that the car was safe for the lady to enter. We never did experience what was supposed to happen if the car did in fact, drop. Just lucky, I guess.

The part that still leaves me perplexed is this: at the end of the elevator’s journey, Mom insisted that it was up to the gentleman to leave the car first, as well. When pressed, she explained that again, should anything happen, the gentleman would be in a safe place, a permanent place, from which to assist the lady’s exit from the ship of doom. I never took the opportunity to tell her, “Mom, it makes no sense.”

Habits die hard, and these days, as I dip a shoulder and try to board elevators before a woman, I get some really dirty looks for being such an impolite cad. I’ve always failed to summon up the courage to say, “My Mom insisted it is proper etiquette for me to get on first!” I’m concerned it’ll start a conversation I can’t logically finish. I think elevators are probably 1000 times safer now, and I worry about making the entire situation worse by speaking up.

I’m wonder if my mother was pulling my leg.