Frank aspired to an iconic lifestyle. 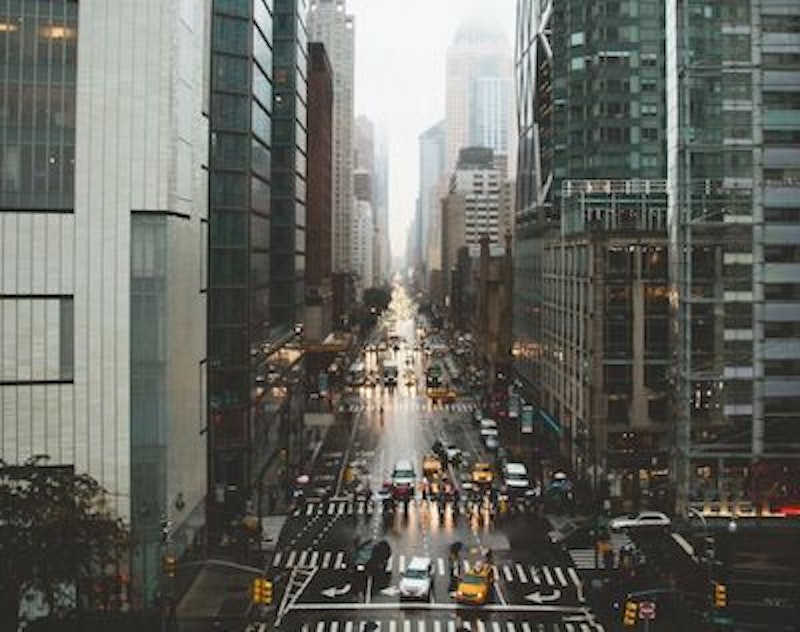 The rain let up to a light drizzle, lending a reflective sheen to the streets, which heightened the otherworldly aura. In fact, it seemed to Frank there were two 8th Aves.: the one he walked on and one he saw in the black mirror of the wet pavement—a mash up of alarming red and yellow blinking streaking lights. It was mostly the yellow light that stuck in Frank’s mind, because for him, the dominant color of the city night was yellow, a kind of sickly imitation of fallen sunlight, filtered through layers of atmosphere and myth. Perhaps it was the leftover glow of creation’s original brilliance descended now through the Manichean dark matter of human evolution.

It was the yellow of the headlights on the prowling automobiles as they flowed eerily through the streets. It was the hunger yellow of Smiley’s Delis, and all the cheap NYC food joints with their window displays full of cuchifritos, plastic Asian entrees, or yellow rice and burritos. It was the yellow of 42nd St. movie arcades and downtown bodega awnings, the yellow bottles of taxi-soda rolling in the gutters, and the jaundiced yellow skin of the predators and peasants who lined the avenues offering their seductive masks to the passersby. Maybe this yellow light was their stage halo and their best disguise—it made red blood look black, while at the same time it made everything seem undeveloped, embryonic. It was the egg-yolk yellow of pornography, industrial waste, fried brains, bad teeth and infected wounds—all colors from that “special” box of Crayola crayons you might get in a hospital mental ward where you would be instructed to fill in the black outlines of your life by some Art Therapy major from NYU.

Of course, all this made 8th Ave. one of Frank’s favorite streets in the city, from the 50s down to the 20s. He thought of it as a great steaming river of flesh, metal and glass, running past sex parlors, prostitutes, hat stores, electronics shops, men’s wear shops, pizza and gyro shops and newsstands. The bright florescent interiors of such places were part of the mystery of NYC, the thing that tourists and residents alike see from their bus windows and passing taxis—a lonely Edward Hopper-esque aura that could make the mundane seem iconic. And Frank did aspire to an iconic lifestyle. Who didn’t want to be a character in an as yet unpainted Hopper canvas, a figure of little import forever frozen in a diner window or sitting at a pizza joint table projecting modern alienation to the world outside.

This was a type of immortality Frank could actually achieve, if someone would just give him the chance. Perhaps he could save someone’s life, turn that person from the downward path. For instance, he might make an impression on some anonymous bus or taxi passenger who would see Frank’s forlorn mug staring out at the waste of the world, and that passenger might remember Frank’s grim face for years to come. Later, as an earnest suburban father, he would sit his son down on some fateful day, and say: “Son, listen to me. You might think I’m a boring guy. You might think I’ve sold out. But let me tell you, son, I once saw a destitute young man in a two-bit pizza joint in New York City and that loneliness and despair made such an impression on me that I decided right there and then that I’d go back home and take that job at the Trust office and marry that high school sweetheart. Because I would never be that lonesome guy. Never. That was a choice I made. And you should be proud, son, because that’s why you’re here today. So I say this as a warning. Be careful.”

Now, this scenario might seem overblown or corny. It might even seem like wishful thinking, but it was an actual narrative Frank was running through his mind as he walked downtown. Yes, he knew in some larger sense he was lying to himself, but he also knew self-deception was necessary. If he didn’t lie to himself, if lies weren’t the matter of our world, he’d have nothing to do and no reason to do it. It was the lies that made us move forward through time and deeper into ourselves. It was lies and not truth that fostered most creative thought. And creativity may be a disease that drains the world, but creativity also forms the world. Fill the void with form. The prophets claim it’s the thing to do. And Frank was no fool, because he certainly wanted to be a part of that. He desperately wanted to participate in the fire.